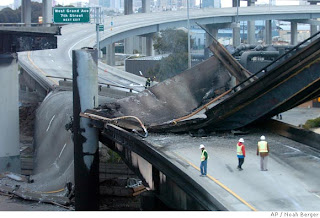 Chris Edwards at the Cato Institute has a blog post called "I cut spending 10%". Here's how he does it:

The savings listed here are rough and rounded 2010 outlay amounts from the president’s budget.

1. Community Development Subsidies. The Department of Housing and Urban Development should not be funding local activities such as street repairs and parking lots. Save $10 billion.

2. Homeowner Subsidies. Federal subsidies for home ownership helped to cause the financial meltdown and recession by putting people into homes they could not afford. Save $10 billion

3. Energy Subsidies. Federal energy subsidies have a long record of waste and boondoggle. Private markets will invest in energy technologies when there is a reasonable chance for a return. Save $20 billion.

4. Higher Education Subsidies. Federal student aid contributes to college tuition inflation, and it can be replaced by private borrowing, family savings, and private charity. Save $20 billion.

5. Overpaid Federal Workers. Federal workers earn an average $120,000 a year in wages and benefits—twice what the average American earns. Federal wages should be cut 10 percent. Save $20 billion.

6. Farm Subsidies. More than 70 percent of aid goes to the largest 10 percent of farm businesses. With an average income 28 percent higher than the U.S. average, farm households don’t need federal welfare. Save $30 billion.

7. Public Housing and Rental Subsidies. Federal housing policies have damaged cities and created concentrations of poverty. They are based on a myth that markets can’t provide low-income housing. Save $35 billion.

8. K-12 Education Subsidies. Rising federal funding of the public schools has not improved test scores. It has only created large bureaucracies and stifled local control and innovation. Save $60 billion.

10. Food Subsidies (Food Stamps and School Lunch). Low-income families often suffer from poor food choices and obesity, not a shortage of calories. Food aid for the needy should be left to private charities. Save $90 billion.

Not bad, Chris, but I'll do you one better. I will cut 25% of the budget. I will do this by eliminating the entire Department of Defense and all spending for the Global War on Terror.

But wait! you say. We need an army, a navy, an air force, etc. to guard our liberty! Oh no, sir. Private individuals can easily provide security, by pooling their money to hire companies like Blackwater to carry out anti-terrorism missions around the globe. And security at home can be provided by private security companies and by the militias mentioned in the 2nd Amendment. There is absolutely no need for a government-funded military. Cut this waste out of the budget.

Now, of course, I'm kidding, and everyone immediately and instinctively knows why: defense is a public good, something that will not be provided by private individuals in efficient quantities. That is why it cannot be privatized (though I must say, that doesn't stop Blackwater and its GOP backers from trying!).

But if you look at Chris Edwards' list of proposed cuts, you will find that much of it comes from other public goods, specifically infrastructure, research, and education. These are things that will not be provided in sufficient quantity by the private sector, as both economic theory and centuries of history clearly demonstrate. Edwards only manages to look like he's cutting waste because large numbers of his Republican readers have been fooled into thinking that infrastructure and education are not public goods (on the issue of roads, Edwards recognizes the problem and attempts to weasel out of it by claiming that states will provide roads more efficiently, something that is obviously untrue for interstate roads, and which in any case is just shifting most of the highway tax burden from federal to state taxes).

Even things like food stamps and housing subsidies contain elements of public good-ness. Without this life support, many people would be thrown into absolute poverty. The result? Riots and crime, which hurt everyone. Libertarians don't like to admit this, but food stamps and housing subsidies are the price we pay for the right to bear arms, since absolute-poor people with guns are wont to go on rampages.

The point here is that refusing to recognize the existence of public goods (or, technically, nonrival goods in general) does not equal fiscal austerity. Conservatives have managed to get away with this hackery too long, and it is time to start calling them on this. Econ 101 must triumph over whatever class the Cato people are taking - Econ 0, let's call it.

(PS - It's worth mentioning that I do agree with some of these cuts. #2 I definitely agree with; biasing people away from renting is bad. #5 has some merit, but the specifics are what's important. #6 is absolutely right. So it's not the case that 100% of Edwards' ideas come from ignoring the existence of public goods...just 80 or 90% of them.)