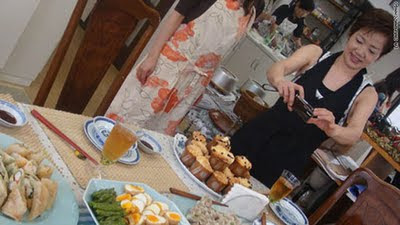 Tyler Cowen, Karl Smith, Scott Sumner, and Matt Yglesias raise a question about the Japanese economy: Why is Japan's unemployment rate so low (<5%) when Japan's growth has been so low for so long?

This is not a puzzle to me. I actually know not one, but two or even three good answers to this question.

Answer 1: Many women in Japan do not work. The unemployment rate is the percent of the labor force who can't find work; if a bunch of women say "I am a housewife and am not looking for work" when the economy turns bad, that will drastically reduce the unemployment rate. This 2010 report from the Bank of Japan finds that the labor force participation rate is 5 percentage points higher in the U.S. than in Japan, with the entire difference due to women. If housewifery were completely cyclical, that right there would be enough to make up the entire difference between the U.S. and Japanese unemployment rates. So comparing U.S. and Japanese unemployment is comparing apples and oranges, because of differing gender roles.

(Note: for this explanation to work, the female labor force participation rate has to go up and down cyclically; i.e., in bad times there must be some housewives who would be willing to work if times were good, and who are therefore actually unemployed. There is some evidence that this has been happening since 1990. This is kind of the mirror image of the claim that some long-term American "unemployed" people are only halfheartedly looking for work while being supported by their families.)

Answer 2: Japan's per capita growth was not so bad in the 2000s. Karl Smith gets this right; Japan's shrinking population makes for low headline growth, but in per capita terms they did just as well as us in the last decade. Check it out: 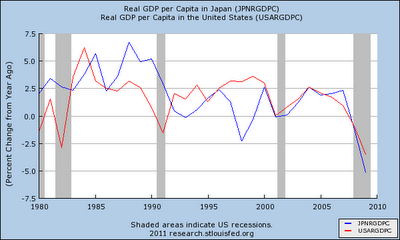 See? Not too shabby! (Of course, per capita growth since '08 has been horrible, so this doesn't solve the whole puzzle.)
Answer 3:  Falling real wages. Observe: 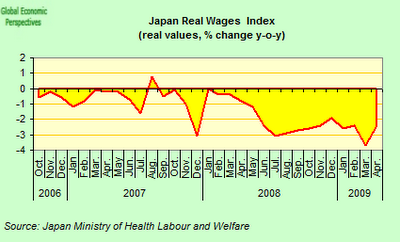 Wages plummeted in the recession, but they were falling even in 06-07, when things were doing better than they had been since the 80s. If real wages fall, unemployment will not rise as much for a given growth slowdown.
(Note: One place that falling real wages will show up is if companies or governments that feel a social obligation to maintain employment levels will shift regular employees to low-wage make-work jobs in a recession. The thought that this may be happening occurred to me as I observed the massive armies of rent-a-cops thronging the streets of Tokyo and Osaka on my most recent visit. But to find out if this is really happening, would have to look in the productivity statistics, and I am too busy to go do that.)
So to me, low Japanese unemployment is not a puzzle at all. The problem, if anything, is overdetermined; given housewives, falling real wages, and robust per-capita growth in the 2000s, the real puzzle might be why Japanese unemployment is so high. (The solution to this counter-puzzle may be that some young people say they are looking for jobs but aren't really; see Karl Smith's graph of youth unemployment.)
(Final note: A word to the wise...if you ever do an image search for "Japanese housewife," make sure SafeSearch is ON.)
Update: Looking at more data, I'm starting to really doubt that my first explanation is driving much of the "puzzle," here, since female labor force participation hasn't fallen much in this recession (unlike in the recession of the late 90s, when it fell by quite a bit). I therefore think falling wages must be driving most of it.
Author: Noah Smith Posted at 10:59 AM