How can debt affect GDP? 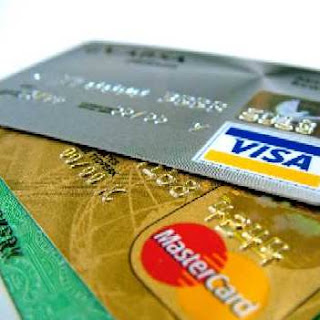 Via Tyler Cowen, I just saw this from Felix Salmon: 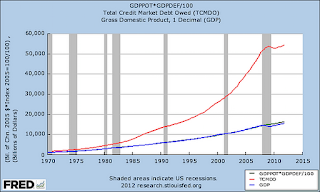 In other words, in order to keep up a steady rate of GDP growth, we had to saddle ourselves with ever more cheap and dangerous debt...

It makes sense that if we needed ever-increasing amounts of debt to keep up that long-term GDP growth rate, then when the growth of the debt market stops, our potential growth rate might fall significantly...

[W]e might indeed have to resign ourselves to lower potential growth going fowards. If only because we’re taking ourselves off the artificial stimulant of ever-accelerating credit.

I have one problem with this, and one question.

The problem is this: The way Salmon talks about debt, and debt's effect on GDP, seems to reinforce a common quasi-fallacy in pop economics - the idea that debt can create temporary but "fake" or "artificial" growth.

Now, as it turns out, there are ways this could happen to a small degree. People can work overtime. Machines can be operated for more hours, at the cost of wear and tear. These things will temporarily increase total production. And maybe debt could give people an incentive to work overtime and to wear out their machines (especially if people repeatedly make mistakes about how likely the debt is to be paid back). But these things aren't very sustainable. Capital will wear itself out. People will probably burn out. Even if you believe that exponentially increasing debt could force us to overwork ourselves and our capital for 40 years, you'd be right to doubt whether we could keep it up for that long. And even if we could, the effect would only be marginal.

So, to reiterate: Production is not consumption, and a nation is not a household. The idea of debt as an "artificial stimulant" that allows us to juice GDP has big problems, since potential GDP is determined by real factors of production. I'm not sure if Felix Salmon is buying into the quasi-fallacy, or just using unfortunate language that brings it to mind (I suspect the latter).

Now on to my question: How can debt affect potential GDP in the long run? Salmon's thesis is, basically, that the collapse of credit markets will permanently lower our potential (i.e. maximum possible) level of GDP. How can this be true?

It's clearly possible for dysfunctional credit markets to lower potential GDP in the short run. Financial intermediation (matching of borrowers and lenders) is a kind of technology, and if this technology is malfunctioning, that means our economy isn't capable of producing as much as it could if credit markets were functioning well. No surprises there.

Now, you could invoke an endogenous growth model, and say: "During the time we spent recovering from the credit crisis, we were unable to invest in researching new technologies, so our technology level stayed on a permanently lower path." Fine. But in that case, we'd expect a small open economy to recover from a credit crisis, since most technology would come to that country from outside. Yet Greg Ip finds that slow recoveries from credit collapses are common in countries like Sweden, even when the rest of the world is doing fine. So endogenous growth does not seem to be the story here.

An alternative story is this: "Technology," defined as long-term productivity levels, is a complex phenomenon, driven as much by the arrangement of economic institutions and relationships as by the stock of human knowledge. This is an "Austrian" or "PSST" story, and one that requires multiple long-run equilibria. But if something like this is going on, it means that a credit collapse might be able to permanently bend the shape of our economic network into a less efficient pattern.

I'm willing to entertain this notion in principle. File this with the rest of complex-systems theory, under "needs a lot more research". (And, just for fun, note that Tyler Cowen might think twice about accepting this kind of explanation, since it directly challenges his "Great Stagnation" hypothesis...if productivity is a function of economic relationship networks instead of just knowledge, then our stagnation could just be due to dysfunctional institutions and arrangements, rather than a slowing of technological progress.)

Anyway, to sum up this post: It seems clear to the average layperson (and it once seemed clear to me) that debt just feeds directly into GDP. But actually, this is not true. We need to think carefully about how debt could boost actual GDP during a boom, and how it could boost potential GDP in the long run. Neither effect is simple or obvious.


Update: Tim Duy says some similar things. Greg Ip, echoing JW Mason and other commenters on this post, suggests hysteresis as the explanation for the interaction between debt-fueled demand and long-run supply.
Author: Noah Smith Posted at 11:36 AM