What happened to Japan?

Since I'm in Japan, I had better do some Japan-related blogging. Brad DeLong poses a question, originally asked by one of his commenters:

Do we attribute this to:

If Japan had avoided its bubble and the resulting financial crisis, it would today have far higher GDP--but once the crisis happened, it ruined into an adverse supply shock and most of what has happened since was then predestined.

If only Japan had followed the Posen plan rapidly after their bubble burst, their world would be very different today and GDP in Japan would indeed be 30-40% higher than it is.

What is the best way to think about this?

Well, I can't answer this properly, because I don't really know what the forecasting community was smoking saying back in 1990. But I have a few thoughts.

Basically, by 1990, Japan had caught up to the richest large nations in terms of per capita GDP. The only way for Japan to have continued at its previous high rate of growth post-1990 would be for either A) an unprecedented technological boom to power a rapid expansion among all the world's rich countries, or B) for Japan's productivity to significantly exceed that of the other rich countries. In other words, anyone who forecasted continued rapid Japanese growth in 1990 was predicting that Japan was capable of doing far better than the other countries of the world, and indeed that this was the most likely outcome.

Now, let's look at Japan right now. Wikipedia tells us that Japan's per capita GDP, in market-exchange-rate (sometimes called "nominal") terms, is $45,900. That compares with $44,500 for Germany, $43,100 for France, and $39,600 for the UK. I picked Germany, France, and the UK because these are other rich developed nations with populations between 50 and 150 million and growth rates similar to Japan's. In other words, in nominal terms, Japan is richer, per person, than any comparable country. I suspect that what difference exists is due to labor inputs, since Japan does not force its citizens to take lots of time off of work the way Germany and France do.

At purchasing power parity, the numbers are a little less favorable for Japan - $34,300, compared with $38,400 for Germany, $35,900 for the UK, and $35,000 for France. However, I am suspicious of these numbers, since PPP does not take into account quality differences between similar products across countries. Japanese consumers have a famous preference for quality. Japanese plastic kitchen wrap, for example, is so strong and easy to use that it doesn't even deserve to be mentioned in the same sentence as Saran Wrap. Japanese pens last longer. The cheapest, lowest-quality Japanese milk is what we Americans call "organic milk" and pay a price premium for. Etc. (To be fair, Japanese houses are built of shoddy materials, have terrible floor plans, and don't have central AC.)

So the "real" level of Japanese GDP, if such a thing can be said to exist, is probably somewhere right around that of Germany, France, and the UK. "Lost decade" or no, Japan in 2012 is right where the Solow Model says it should be.

What could forecasters in 1990 have been smoking that made them see this as anything other than the inevitable outcome? I suggest two things: 1) dumb trend projection, and 2) attribution error.

Dumb trend projection is people's tendency to view trends as structural. Examples of this include: "Housing prices have never fallen; hence they will never fall." "This stock returned 17.2% over the past three decades; hence it will continue to do so." "The center of gravity of the global economy is inevitably shifting to Asia." And so forth. But in reality, past performance is no guarantee of future results. Or, to put it more pithily, "The trend is your friend til the bend at the end."

Attribution error is our tendency to attribute phenomena to the wrong causes in certain reliable ways. One of these is that we tend to attribute outcomes to fixed person-specific characteristics rather than to circumstance and situation. In Japan's case, this means that people thought that Japan was growing fast in the 70s and 80s because of Japanese culture, superior Japanese government, or - and I suspect that this was more significant than people will admit - the inborn superpowers of the Japanese race.

Whatever superpowers Japanese people may have (I have found that they tend to be extremely good at "Where's Waldo?"), it did not turn out to give them a decisive productivity advantage over the Germans, French, and British. I guess in 1990, Japan was the only East Asian country ever to have gotten rich, and so there was perhaps more cause to believe that maybe East Asian countries could do things European countries couldn't. There are few who now believe that South Korea will blast through the productivity frontier.


Update: Ryan Avent says I'm completely wrong. Market-exchange-rate GDP numbers, he says, are distorted by currency fluctuations; the yen is strong right now, so Japan looks rich. And this is true, although the Big Mac Index, produced by Mr. Avent's employer The Economist, says that the yen is not currently overvalued. My point is that neither market-exchange-rate nor PPP numbers tell the whole story. Mr. Avent does not address the limitations of PPP calculations, which go far beyond what I wrote about in this post. I still maintain that when trying to make cross-country comparisons, you should look at both numbers.

Mr. Avent is trying to defend his thesis of a "Japanese tragedy" caused by tight monetary policy. I agree that tight monetary policy has hurt Japan to some degree, and I'd draw attention to the fact that Japan's best post-bubble performance (in 2004-2007) came on the heels of a program of Quantitative Easing. But  that does not change the fact that Japan's standard of living is comparable to that of the major Western European economies (Australia is not an appropriate comparison, being a sparsely populated economy powered by abundant natural resources). And in addition, during the worst years of the "Lost Decade", Japanese unemployment was only 3% higher than at the peak of the bubble. So yes, there have been policy mistakes here, but the end of catch-up growth was no "tragedy", it was inevitable.

Update 2: On Twitter, my advisor Miles Kimball suggests that I look at the change in the yen's real exchange rate in order to better evaluate Ryan Avent's claim about market-exchange-rate GDP measures. Here, via Wikipedia, is a long-term (but up-to-date) chart of the yen/dollar real exchange rate: 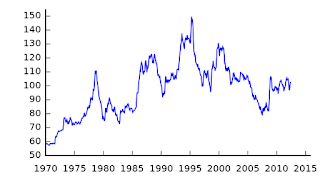 Ryan's claim is that changes in this exchange rate distort Japan's market-exchange-rate GDP (making PPP the only good measure). But from this chart, we can pretty clearly see that he's wrong. The yen is currently at or weaker than its long-term average value (when the blue line is higher the yen is weaker). There has been no trend of yen strengthening since the mid-80s (when Japanese growth was robust). Hence, neither the trend nor the level of the yen exchange rate indicate that market-exchange-rate GDP is a worse measure than PPP GDP when discussing Japan's wealth relative to the United States.

But what about the European countries? If the pound, deutschemark, and euro have gotten steadily weaker since 1990, then their market-exchange-rate GDP numbers are "too low". But this is also not the case. In other words, Ryan is not right...exchange rates are not distorting the comparison between Japan and other rich countries. Japan is right up there with the richest large countries in the world.
Author: Noah Smith Posted at 5:08 AM