Apple and Sony: an eerie parallel? 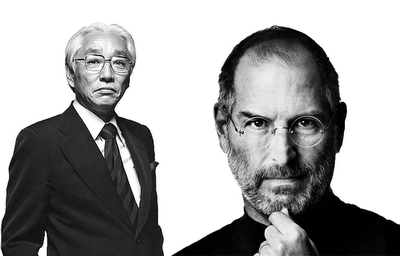 (Note: This post is a break from "serious" econ blogging...)

OK, Don't go and make any financial trades based on this (or anything you read in any one blog post), but check this out: 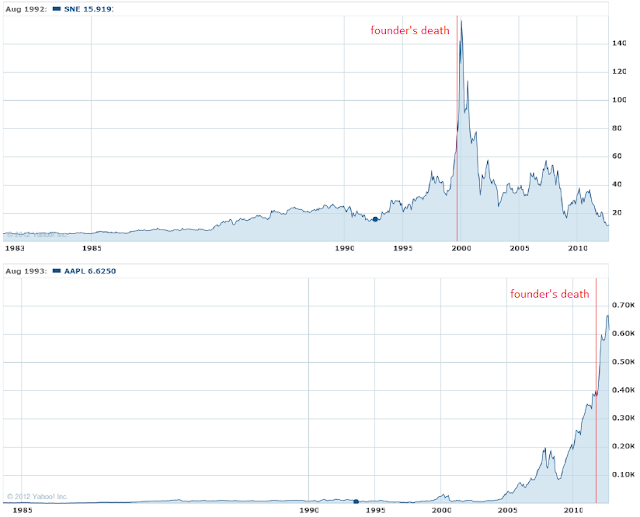 It's well known that Steve Jobs idolized Sony, especially its founder Akio Morita. Morita was a Jobs-like figure, maniacally focused on design and on pleasing the consumer (while his partner, Masaru Ibuki, the Wozniak of Sony, handled the initial technical wizardry), and loved by the public. Sony even inspired Jobs' wardrobe.

There are other parallels. Sony's big break was a portable music device; so was Apple's. Like Apple today, Sony in the 90s was known for having cult-like fans in its domestic market; these "Sony-heads" would essentially buy anything that Sony put out, even as the company's image slipped internationally. I've even heard people allege that those fans provided the company with a profit cushion that allowed it to ignore problems on the horizon.

In any case, when Sony's charismatic founder died, the firm was at the top of its game, and on top of the world. After Morita's death in October of 1999, Sony's stock price rose dramatically, only to crater a few months later.

Since Steve Jobs' death a year ago, Apple's stock has soared. But is there a parallel here? Is Apple's recent downtick the start of the kind of epic fall suffered by Sony in 2000? If so, that'll be kind of neat.

As I wrote at the top of this post, the point here is not to say "Apple = Sony! Sell!" Don't do that. (If you're interested in trading Apple stock, go be an Apple analyst; otherwise, keep your money in a nice diversified portfolio and trade only once per year.) The point is to wonder about the effects of iconic founders. Do celebrity founders who reach the iconic status of a Jobs or a Morita endow their companies with fat profit margins, by creating a group of super-fans who would pay $600 for a brick as long as it sported the company logo? Does a diehard core of super-fans lead a company to become complacent after the death of the iconic founder?

And does the death of an iconic founder lead to a predictable rise in a firm's stock price? Do investors implicitly believe - for a little while, anyway - that the "spirit" of an iconic founder lives on in the company he founded, causing them to overestimate the company's prospects, leading to a predictable crash in price? And can the timing of that price crash be predicted?

It's an interesting question, and one that's hard to evaluate econometrically, since iconic founders seem like they should be pretty rare. But maybe they're not as rare as I think, and someone out there will find a way to investigate this empirically and write a paper on it. In which case, any market-beating investment opportunity based on iconic founder deaths will promptly disappear...