On 2/26, Miles Kimball wrote a Quartz column called "What Paul Krugman got wrong about Italy's economy", in which he said this:


In the last few days, while the US political debate centers on ways to deal with burgeoning debt, UK government debt has been downgraded and investors are demanding much higher yields on Italian debt in the wake of the Italian election results (paywall). As concerns about national credit ratings push economies around the world toward austerity–government spending cuts and tax hikes–some commentators are still calling for economic stimulus at any cost. Joe Weisenthal wrote that David Cameron must spend more money in order to save the British economy. Paul Krugman wrote in “Austerity, Italian Style” that austerity policies simply don’t work. The downside of their prescription of more spending—and perhaps lower taxes—is that it would add to the United Kingdom’s and to Italy’s national debt. And national debt beyond a certain point can be very costly in terms of economic growth, as renowned economists Carmen Reinhart, Vincent Reinhart, and Kenneth Rogoff convincingly show in their National Bureau of Economic Research Working Paper “Debt Overhangs, Past and Present.”

Where do the United Kingdom and Italy stand in relation to the 90% debt to GDP ratio Reinhart, Reinhart and Rogoff identify as a threshold for trouble? (It is important to realize that their 90% threshold is in terms of gross government debt. That is, it does not net out holdings by other government agencies.)

[T]o my great disappointment all I found was yet another invocation of the Reinhart-Rogoff claim that bad things happen when debt goes about 90 percent of GDP.

Look, this is just not an established result. It’s a correlation; but it could just as well reflect a pathway from slow growth to high debt, or from third factors like political and institutional dysfunction to both slow growth and high debt...

So why do people imagine that this is a definitive result? That’s obvious. R-R on debt got picked up eagerly by deficit scolds, because it said what they wanted to hear...

Is Reinhart-Rogoff itself a zombie? Not quite — it could still be true, although I don’t think so. But the idea that the 90 percent threshold is a definite result, established beyond question, is very much a zombie idea, one that has been killed repeatedly but just won’t stay down.
So who is right?

Krugman has a good point: The "90%" thing is not well established; it is obviously just Reinhart and Rogoff eyeballing some sparse uncontrolled cross-country data and throwing out an off-the-cuff figure that got big play precisely because it was simple and (to deficit scolds) appealing. The 90% number alone is not a justification for worrying about debt.

However, Krugman did fail to notice one interesting point. When discussing a paper by Greenlaw et al. (which makes an "80%" claim similar to R&R's "90%" claim) in an earlier post, he noted a very interesting pattern:


Even the quickest look at the data suggests that there’s something to this argument; for example, taking data from the paper itself, and dividing the countries into euro and non-euro, we get a scatterplot like this: 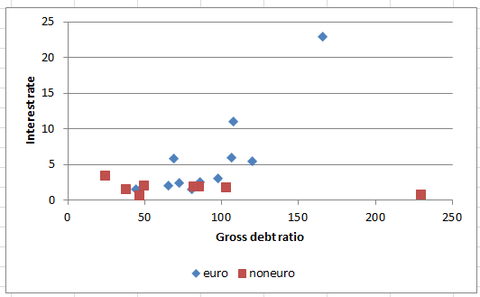 It’s not just Japan, off at the far right, that looks different; Canada, the UK and the US, the three red squares along the middle bottom, also seem to have borrowing costs well below what euro-area experience might have suggested.

Furthermore, the experience since mid-2012, in which the ECB drove spreads down sharply after it signaled its willingness to head off self-fulfilling liquidity crises — which can’t happen to countries with their own currencies – also suggests that the own-currency issue is crucial.

So we have a good theoretical reason to believe that eurozone countries - which don't have their own currencies - are very different animals from countries like the U.S. and UK. In other words, there probably is a good reason to worry about Italy's debt levels.

Of course, Miles misses this too, and lumps own-country borrowers in with eurozone borrowers.

But I feel that this argument over debt levels is mostly a distraction. The important thing, which is being overlooked, is that Miles has come up with a really interesting policy tool to increase the amount of stimulus per unit of debt incurred. That tool is Federal Lines of Credit, or FLOCs - basically, the idea that government should lend people money directly.

FLOCs have a distinct advantage. They avoid the problem - which everyone acknowledges - that people tend to pocket and save their stimulus checks, thus canceling out the effect of the stimulus while running up government debt. FLOCs only dish out money if people are going to spend it; hence, they get more stimulus "bang" for every debt "buck". Even if we aren't worried about debt at all, FLOCs seem like a good deal, compared to just mailing out checks.

However, I do have some skepticism about FLOCs. First of all, there is the idea that much of the "deleveraging" we see in "balance sheet recessions" may be due to behavioral effects, not to rational responses to a debt-deflation situation. People may just switch between "borrow mode" and "save mode". In that case, offering them the chance to take on extra debt is not going to do much. Second, and more importantly, I worry that FLOCs might draw money away from infrastructure spending and other government investment, which I think is an even more potent method of stimulus; govt. investment, like FLOC money, is guaranteed to be spent at least once, but unlike FLOCs it can increase public good provision, which is a supply-side benefit.

(Note: Mike Konczal has addressed Miles' proposal, and has a lot of problems with it.)

That said, I think the FLOC idea is an interesting one. Why have most stimulus advocates ignored it? My guess is that this is about politics. In an ideal world, pure technocrats (like Miles) would advise politicians in an honest, forthright fashion as to what was best for the country, and the politicians would take the technocrats' advice. In the real world, it rarely works that way. For every technocrat who just wants to increase efficiency, there's a hundred hacks and politicos who are only thinking about distributional issues - grabbing a bigger slice of the pie. These hacks are very willing to use oversimplified narratives and dubious sound bytes to embed their ideas in the public mind. And that kind of thing really seems to be effective.

This means that politics' response to policy is highly nonlinear - give the enemy an inch, and they take a mile. It also means the response is highly path-dependent; precedent matters.

So Krugman et al. may be ignoring FLOCs and other stimulus engineering tricks because of political concerns. If they concede for a moment that debt is scary, it will just shift the Overton Window toward Republican types who are deeply opposed to any sort of stimulus, and would oppose Miles' FLOCs just as lustily as they opposed the ARRA.