Thoughts on the Neoreactionaries I had resisted blogging about the so-called "Dark Enlightenment", because the name is just so silly. The main champion of the movement is a guy who, for reasons unfathomable to me, blogs under the name of "Mencius Moldbug". That sounds like a perfect name for a Rainbow Brite villain, and the "Dark Enlightenment" sounds exactly like a sort of steampunk-looking machine that said villain would create in order to destroy all rainbows and cover the world in shadows!!! 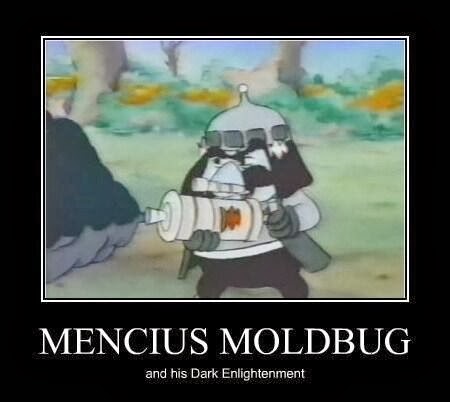 In addition to the irredeemably goofy terminology, Moldbug's blog is written in a style that is, to put it mildly...garrulous. I mean, I'm a long-winded guy myself, but Moldbug never fails to use 10,000 words when 1000 would have sufficed.

But then I came across the blog of Michael Anissimov, a smart, thoughtful guy who is also part of that movement, and who prefers the more sensible name of "neoreactionary". So I started thinking about the neoreactionary movement, and what it is, and what it could do for our society. My understanding of the movement, who it is, and what it wants comes not just from Anissimov's blog, but from various Twitter feeds, from the comment threads of articles like this one and this one, and from whatever amount of Moldbug I could manage to slog through without dying of boredom. Here's what I think I've pieced together.

First, what is neoreaction all about? Anissimov says that it's basically an aesthetic, but it's more than that. It's a very old concept of what Western Civilization should be like. I'm pretty sure that in some form, the neoreactionary ideals have been around since at least the time of the Carolingian Empire, and maybe before that.

Essentially, neoreaction is the dream of a society of mostly white people, living in a hierarchy based both on group membership (aristocratic lineage, gender, race) and individual ability (IQ). The neoreactionaries do not demand total racial purity. But many seem to think that if multiple races live in the same country, the races should be placed in a hierarchy of power, status, and freedom, apparently based on the average IQ of their racial group. Since the movement is about European traditionalism, it's not clear whether white people would be given a special place in the hierarchy, even above those groups whose average IQ is higher than that of whites.

As for women, many neoreactionaries appear to want them to return to traditional social roles - homemaking and child-rearing - and to submit more willingly to the sexual desires of men. Finally, there is some sense that within these group boundaries, the neoreactionaries might want a limited meritocracy - in other words, maybe the smart should rule. However, some neoreactionaries (particularly Anissimov) praise the idea of aristocracy, apparently believing that naturally superior people would manage to win the titles of nobility, and that their descendants would remain superior.

In other words, the neoreactionaries want the West to be a lot like the Ming Dynasty, but for white people. I've often thought of Europe as "the China that never quite made it"; neoreaction seems like the latest manifestation of a dream that refuses to die.

The neoreactionary social ideal naturally has great appeal for certain groups of people. To white people who feel stressed at having to live in a diverse society, the emphasis on racial homogeneity must be a nice feature. To those whites who feel superior to other racial groups - for example, Steve Sailer and the racist "Human Biodiversity" community - the group hierarchy aspect is appealing. And for certain geeky men who never quite felt that society was giving them their due, the idea of demure, submissive women handing out free BJs to anyone with a 130 IQ (and then mopping the floor) must sound like the right and natural state of things.

Of course, I would not like to live in that sort of society, but that's no reason to get angry at the neoreactionaries, as science fiction author David Brin frequently does. They are interesting to talk to. Their ideology, which is already present in various watered-down forms in American conservative circles, is highly unlikely to triumph, and in the meantime it may have some positive effects.

In case you haven't noticed, modern American libertarianism really annoys me. Much more than it probably should, given the fact that I share many of that movement's ideas - distrust of government, respect for personal liberty, etc. But that's exactly why libertarianism annoys me so much: it's so much like me in some ways, and yet so maddeningly different in others. It's smack dab in the uncanny valley of affiliation.

There are two things that annoy me about libertarianism. The minor annoyance is ideological inflexibility; a number of otherwise smart libertarians fetishize the Robert Nozick idea-package to the point of catechism. But much more annoying is the fact that libertarianism has become a hideout for a bunch of white racial nationalists. At the grassroots level there are the Ron Paul people. But at the elite level, the movement includes people like Jason Richwine and Garret Jones, who love to talk about race-IQ correlations. And even non-racist libertarians like Bryan Caplan nevertheless often support the idea of individual-level IQ-based elitism. Then, of course, there are the "Austrian economics" people.

Part of me would like to see these two simultaneous tugs-of-war split the libertarian movement down the middle. Let the Ron Paul people and the Richwines turn to neoreaction, which is a more natural home for them anyway, and give me the intellectual libertarians who just want society and the government off their backs. But part of me worries that this result would polarize American society unnecessarily; libertarianism, annoying as I often find it, may act as a buffer preventing the kind of bitter fights between leftists and rightists that one sees in European countries. I still haven't made up my mind about this.

So what other good things do I see coming out of the neoreactionary movement? Actually, there is one big one. Neoreactionaries want to live in a homogeneous, traditional society, but they're not alone - lots of conservative Americans yearn for these things. Of course, it's just not going to happen - America is too diverse already, and the internet makes a mockery of traditional life. But that doesn't stop some Americans from wanting these things. And I think they need to see where that path really leads. The neoreactionary movement shows, very clearly, where the path of homogeneity and traditionalism would eventually take us.

So I think that the neoreactionary movement can do America a great service by bringing far-right ideas out of the shadows and into the light, where people can decide if they like those ideas or not. I'm betting on "not".

But anyway, I had better stop before this turns into a Mencius Moldbug monster-post.
Author: Noah Smith Posted at 12:34 PM