Japanese inflation isn't as high as you think

I always thought that "core-core" was a kind of hardcore music so hardcore that the only one who can play it is GG Allin, and only if he literally blows himself up onstage. But actually, "core-core" is a type of Japanese inflation that does not include food or energy prices. You may recognize this as being the same thing as what the U.S. calls "core" inflation. And you'd be right. The problem is that Japan already had something that they called "core" inflation, which omits food but does include energy prices. This naturally produces confusion in the press, since journalists dutifully report on Japanese "core" inflation, which readers take to be the same as the U.S. measure, even though it isn't.

Anyway, so why is this important? Because for months now, you've been hearing that Abenomics - or at least the monetary policy part of Abenomics - has been a solid success. Japanese inflation, you've heard, is climbing up toward the 2% target. To many people, that is a sign that monetary easing can hit inflation targets if the central bank is really committed to doing so.

The problem is, the Japanese inflation that people are looking at is the Japanese "core" rate, not the "core-core" rate. In other words, those rosy numbers you're seeing include energy prices. And energy prices have gone up, partly because of supply restrictions that are unique to Japan (i.e. restrictions on nuclear power in the wake of Fukushima).

Sober Look has the details:


The upturn in [Japanese "core"] CPI inflation by December was still being heavily influenced by utility prices that were up 5.5% y/y due to the effects of yen depreciation on imported natural gas and oil prices, and higher electricity prices in the face of Japan’s continued shutdown of all of its nuclear reactors. Take energy and food — which is also probably under upward pressure in part due to yen depreciation — out of CPI and it is only up 0.7% y/y as food prices themselves are up 2.2%. Most of the CPI effects of the Bank of Japan’s efforts to depreciate the yen remain confined to a relative price shock to food and energy... 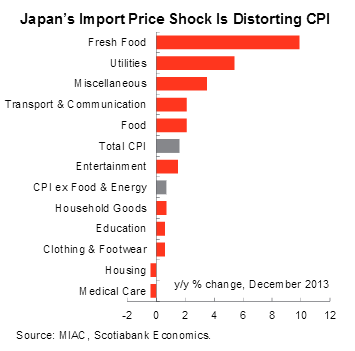 In other words, if you use the inflation measure we use in the U.S., Japanese inflation is running at only 0.7% - not very close to its 2% target.

And as Paul Krugman reminds us, energy prices are volatile, so we shouldn't think about them when we assess the short-term effects of monetary policy:


[O]fficial Fed doctrine is to focus on core inflation, not react to short-run fluctuations in commodity prices. And the history of the past decade or so has showed that this is very much the right thing to do — headline inflation has swung widely, while focusing on core inflation has been a much better (though not perfect) guide to appropriate policy: 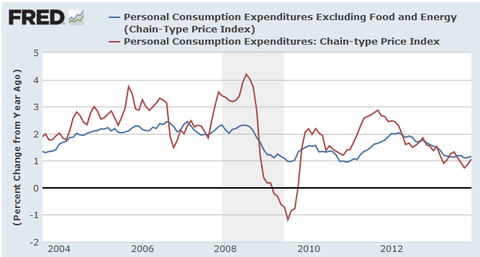 So basically, Abenomics has not yet shown that a central bank can hit a 2% inflation target after a long period of deflation. That proposition remains an article of faith. Perhaps the target will be hit...perhaps not. (Of course, if it's not hit, expect a few supporters of monetary easing to say that the Bank of Japan was just not committed enough to hitting it...)


Update: I recently bought a Japanese-language DVD biopic of GG Allin in a back-alley shop in Harajuku. I have now discovered the true meaning of "core-core".
Author: Noah Smith Posted at 6:47 PM