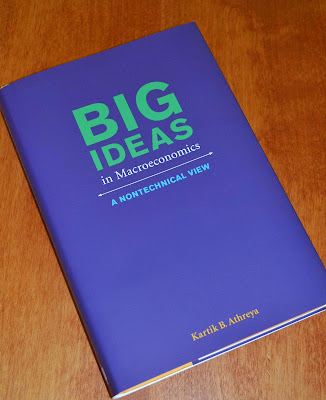 (This is Part 3 of my ongoing review of Big Ideas in Macroeconomics, by Kartik Athreya. Part 1 is here, Part 2 is here.)

On the first day of my first-year microeconomics class in grad school, our professor took us down to the experimental econ lab and had us play a game where we all bid on various computerized "goods". Very quickly, a stable equilibrium price established itself. We didn't have much information - the prof didn't tell us who was bidding against whom, whether we had been given asymmetric information, etc. But again and again, prices converged to a stable equilibrium.

This experiment was meant to show us that "general equilibrium" - which we spent the rest of the semester learning - is not just a fantasy that some economists dreamed up.

The Big Idea in Big Ideas in Macroeconomics is Arrow-Debreu-McKenzie Equilibrium, which is basically the same thing as "general equilibrium" or "Walrasian equilibrium". Athreya tells us that this is the central concept in macro.

Chapter 2 of Big Ideas is all about the Arrow-Debreu-McKenzie equilibrium concept. It's my favorite chapter in the book. Unfortunately it rambles, switching back and forth between explaining concepts (like the Welfare Theorems) and countering criticisms (like the idea that the Sonnenschein-Mantel-Debreu theorem makes general equilibrium useless). But it's still a good chapter, with lots of useful info and some very cool classic paper references. For example, I learned about this very interesting 1974 paper by Mount and Reiter, which shows that the prices in general equilibrium are, in a certain sense, very efficient at conveying information.

The coolest part of the chapter, in my opinion, is Subsubsubsection 2.6.3.1, entitled "Markets as Calculators". Contained within this obscure subsubsubsection is a discussion of a very deep question - whether "macroeconomics" really exists!

Ed Prescott famously disdains the term "macroeconomics", preferring the term "aggregate economics". The implication is that "macroeconomics" is just a straightforward summing-up of the behavior of a bunch of individuals. Modern macroeconomic models are made this way. Unfortunately, when we look at the real economic behavior of real individuals, it looks nothing like what you see in most of those macro models. This generally leads a lot of microeconomists to complain that macroeconomists are doing it all wrong - in fact, few micro theorists even work with Walrasian equilibrium anymore.

But what if Walrasian equilibrium is an emergent phenomenon? What if the aggregation of a whole bunch of behaviors that looks nothing like the simple stuff in a macro model ends up producing outcomes that look very much like the outcomes in the models? If so, then macroeconomics really is distinct from the rest of economics, and Walrasian/Arrow-Debreu-McKenzie equilibrium really is the right tool for macro.

Athreya discusses four results that suggest this possibility. First, there's the Mount and Reiter result about information and prices. Second, in Section 2.6.2.5, he discusses the literature on "market games", in which strategic interactions with only a little bit of centralized coordination lead to Walrasian equilibrium outcomes. Third, in Section 2.6.3.1, he discusses the large experimental literature, in which many types of market setups (such as the one I did in my grad school class) lead to Walrasian-type outcomes. And in that same section he discusses work that shows that even computers with very simple trading rules tend to converge to Walrasian equilibria in many cases.

This is very interesting stuff. It's also one of the only points at which Athreya shows a glimmer of doubt about the modern macroeconomic research program. He writes:


The fact that market participants lacking a [Walrasian clearinghouse] are able to trade as if there were one is thus amazing, and, interestingly, not such good news for modern [macro]economics...[T]heoretically based support (or doubt) of the likely outcome of a given set of rules is not necessarily a great source for good explanations of why outcomes look "competitive"...So if Walrasian equilibrium works well to predict outcomes in the lab, we may have the right answer but for the wrong reasons.

In other words, maybe Prescott is wrong, and an emergent "macroeconomics" does exist that can't easily be predicted by modeling people as "purposeful decision makers", as Athreya insists we do throughout most of Big Ideas. If that's the case, then departures from the Walrasian equilibrium base case can't be modeled by imagining how individuals would behave in response to the missing markets.


Is game theory a viable alternative?

The general equilibrium setup is pretty flexible, but it doesn't allow for strategic interactions - agents have to be price-takers. Thus, game theory is the main fly in the soup for proponents of Arrow-Debreu-McKenzie as the foundation of all modern macro. Athreya addresses game theory, but generally dismisses the importance of strategic interaction in the macroeconomy.

He does this in several ways. First, he discusses some common ideas about strategic interaction by firms monopoly - collusion, etc. - and claims that these are unlikely to be very important in the macroeconomy. Next, he cites the above-mentioned literature on certain games whose outcomes converge to Walrasian equilibrium. Then he asserts that the price-taking assumption - the key feature of general equilibrium - is a good assumption. Finally, he simply asserts that the macroeconomy is just too big for strategic considerations to matter:


Nearly any specification of interactions between individually negligible market participants leads almost inevitably to Walrasian outcomes...The reader will likely find the non-technical review provided in Mas-Colell (1984) very useful. The author refers to the need for large numbers as the negligibility hypothesis[.]

Well, that settles it!

But seriously, though some of what Athreya says is convincing, I do think there is at least one important strand of literature that Athreya misses - the literature on global games. Global games are a situation in which large - even infinite - numbers of agents, all acting independently, can move together like a herd. Here's a book chapter by Stephen Morris and Hyun Song Shin that explains how global games can have big macroeconomic outcomes. One example is currency crises, which contributed to deep recessions in a number of Asian countries in 1997.

Also, a number of modern macro models are introducing strategic interactions in the form of wage bargaining. This is important for models of unemployment and job search. So I think Athreya is a little too quick to totally dismiss game theory as an important tool for macro, though overall he does a decent job of dealing with it.

In Chapter 2, Athreya talks about two theorems that people have used to criticize the use of Walrasian equilibrium - the Sonnenschein-Mantel-Debreu theorem, which shows that the economy doesn't have to behave like a single individual and that equilibria will in general not be unique, and the Boldrin-Montrucchio theorem, which shows that equilibrium prices and quantities can be chaotic. Athreya acknowledges these problems but basically waves them away, saying that we can safely assume that the non-uniqueness and the chaos will be quantitatively small.

We know that in the real world, macroeconomic quantities don't look too chaotic, so maybe that one can be waved away. But I'm not sure the problem of multiple equilibria can be so easily dismissed. Lots of perfectly standard models start exhibiting multiple equilibria once you let a little nonlinearity creep in. Macroeconomists' general approach is to assume away or ignore multiple equilibria. This practice has always annoyed me - if your model tells you a result, aren't you supposed to faithfully convey that result? Isn't that the whole point of this "assumptions lead logically to conclusions" game? Instead, when confronted with multiple equilibria, macroeconomists tend to just assume there's something wrong with the model, and go back to the drawing board, or else restrict parameter values just to make the indeterminacy go away. In Chapter 5 Athreya has a section entitled "Can Macroeconomists Put Enough Structure on Their Models to Avoid Generating Multiple Equilibria?"

But to me this just doesn't make sense; why should you torture your assumptions to make multiple equilibria go away, when they very well might be real? In Chapter 1, Athreya said that macroeconomists choose the assumptions that are the "most useful". If getting rid of multiple equilibria is a goal, then doesn't "useful" just mean "useful for getting the model to produce the desired results"? What's the point of reverse-engineering one's desired result? How is that a useful exercise? How does that help us understand the world around us?

Chapter 4 of Big Ideas is entirely devoted to answering critics. Athreya defends all the standard macro tools - representative agents, rational expectations, steady-state analysis, and expected utility. These debates are too deep for me to really get into - actually, they go way deeper than Athreya goes, too. If you want to know whether expected utility or representative agents are OK, you need to read more than is in this book. Athreya goes out of his way to defend these shortcuts - in keeping with the "apologia" feel of the book - and he does an OK job of it, given the space allotted.


Is general equilibrium "not even wrong"?

Arrow-Debreu-McKenzie equilibrium is a framework, not a theory or model. You can't falsify or disprove ADM as a concept, just like you can't falsify the practice of writing down reaction equations in chemistry. What you can do, theoretically, is show that the ADM framework is not the best framework in some certain situation. For example, if you find out that people are behaving strategically, in a way that affects the aggregate outcome of a market, then you know that the price-taker assumption is not appropriate in that case, and ADM is therefore not the best framework to use when modeling the situation.


The basic ADM model is so general that it has no direct implications for what one should observe in the data...We simply see that a model that allows nearly unlimited richness and variation among its constituent parts also implies few sharp observable implications.

Actually, I think this is not quite right. ADM assumes the Law of One Price, and you can theoretically observe how well that holds. It also assumes that people behave as price-takers - if you can observe human intentions, and you see people behaving strategically (in a way that affects the aggregate outcome of a market), then you can see that ADM is not a good description of individual behavior (even if some ADM-like results may "emerge" anyway).

But it is true that the ADM framework is very very general. Fortunately, Athreya recognizes that being "not even wrong" is not necessarily a strength:


The unobservability of many aspects of the ADM construction is not all good, of course. Most obviously, it causes us real problems in assessing the relevance of the ADM framework in describing what we see around us...In fact, with no further restrictions...we ought not to expect any more definitive implications from the ADM model, such as outcomes (equilibria) that match even qualitative features of the data...[T]o generate predictions from actual observable data, we need to add more structure[.]

Arrow-Debreu-McKenzie/Walrasian/general equilibrium is the "Big Idea", but Athreya - correctly - recognizes that it's not enough. To be useful, macro needs some benchmark models that are far more restrictive and specific. General equilibrium is a "paradigm" in the sense of a framework for thought, but not a "paradigm" in the sense of a successful theory that you can tweak slightly in order to solve new problems.


Anyway, in Part 4, I'll talk about whether the 2008 crisis was also a crisis for macroeconomics. Stay tuned!
Author: Noah Smith Posted at 1:11 AM