Nerd Culture and its Discontents 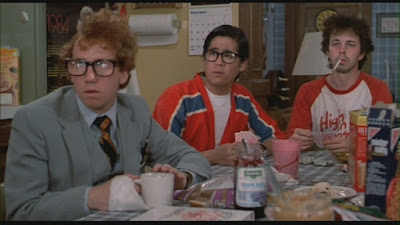 For most of the time that I was growing up, the struggle of nerds for acceptance in mainstream American society was an important part of both my life and the culture I was surrounded by. Movies like Revenge of the Nerds depicted nerds - people who liked to use their brains - as downtrodden outsiders, struggling against a dominant culture ruled by "jocks" and other anti-intellectuals. That struggle dovetailed with the idea that human capital - the ability to do math, program computers, and otherwise use your brain - was going to be crucial to the economy of the future, and that America's anti-intellectual culture was in danger of holding it back. The struggle of the nerd was not just a struggle for inclusion, it was a struggle for the nation's future.

So it's been a sobering and unpleasant experience for me to see the degree to which America's intellectual culture has seemed to turn against nerds in recent years. Mainstream culture has accepted nerds more and more, but this has turned nerds from outsiders into insiders, which means they've lost their cred as downtrodden rebels. That in turn has given rise to a number of problems within nerd-dom - problems which intellectuals have been justified (if over-enthusiastic) in calling out. Here are three of the main lightning rods, and why I think they matter:


1. The Rise of the Ubernerds

The American economy's turn toward higher-value-added activities, and the general advance of technology, have changed the composition of who gets rich. In the past - and here come some huge simplifications - people got rich by organizing other people. That required relationship-building skills, first and foremost. Andrew Carnegie and Leland Stanford were undoubtedly very smart people, but their success came from their ability to deal with others, not from direct application of their intelligence to technical problems. In recent years, that has obviously started to change, with the high proportion of new super-rich people who got rich by creating tech companies. When Bill Gates, a bespectacled computer nerd, claimed the title of Richest Person on Earth, it was clear something had changed.

But when nerds are winners, it's hard to argue that they're a disadvantaged group of outsiders. America has always measured success by money, and now being a nerd makes you get rich. Coders and scientists have great salaries, and more importantly, they have positions of authority within corporate hierarchical organizations. Nerds are no longer despised brain-slaves toiling in the basement without recognition, as in years past (e.g the 1980s Goldman Sachs culture described in Emanuel Derman's My Life As A Quant). Nerds now have equity.

When you're rich, you lose your cred as a downtrodden group. What's more, some nerds seem to realize this, adopting many of the "bro" culture elements that in the past were the exclusive province of relationship-building backslapping frat-boy CEOs. Tri-Lambs, we hardly knew ye.

And as you might expect given these trends, a few of these Ubernerds are starting to look pretty arrogant. You have techno-libertarians reading Ayn Rand and styling themselves as modern John Galts. You have the occasional techie spewing disgust against the homeless. You have the occasional rich tech businessman suggesting that the rich should get more votes than the poor. And it's not just puffed-up rhetoric, either - sometimes it comes with real power. Witness the ease with which Uber just crushed an attack by Bill De Blasio, one of the most powerful local politicians in the country. Power is scary.

Now that nerds have the option to become rich, arrogant overlords, their status as a pariah group is effectively over, along with any sympathy that generated.


2. The Unbearable Whiteness of Nerd-dom

In recent years, we've started to see a breakdown in "intersectionality" - the idea that all outsider groups should fight for each other (oddly, this is happening just as the word "intersectionality" is starting to come into common use), I suppose is only natural, since disadvantaged outsider groups have gained enormously in power (even if they have not yet achieved parity with heterosexual white males). When a diverse coalition of rebels wins big gains, there tends to be increased friction within the coalition. Not only that, but the progress made by some groups, like gays and women and Hispanics, is starkly contrasted with the lack of progress made by blacks, many of whom remain trapped in horrible neighborhoods, gulag-style prisons, and under the thumb of brutal police regimes - not to mention still being poor overall and suffering disproportionately from the Great Recession.

Compared to the travails of blacks, the problems of nerds seem like chump change. Nerds get ignored by girls in high school; black people are getting shot in the street. Not exactly comparable problems. And at some point, people noticed that there are relatively few black nerds; the flood of money to American nerd-dom is doing a lot more for white people than it is for black people. That can make it seem like nerd-dom is entrenching the black-white racial disparity.

In the old days, this was more likely to be ignored. At the end of Revenge of the Nerds, the jocks are about to physically assault the nerds, but the nerds are saved by the intercession of their black fraternity brothers - a memorable fantasy of successful intersectionality between outsider groups. Now, with intersectionality breaking down, the idea of nerds and black people as natural allies is swiftly vanishing.

In addition, we've seen the arrival en masse of a new racial group - Asians. Because Asian immigrants are disproportionately admitted for their technical skills, they are massively over-represented within the nerd community. But within that community, they seem to suffer discrimination. Asian tech workers are regularly bypassed for executive jobs in the tech industry, in favor of white co-workers with less technical skill. That naturally tends to make many Asians feel as if nerd-dom isn't working for them - at least, not as much as it is for white nerds.

So when nerd-dom seems like it's only working for white people, that's going to make an increasingly non-white America less keen on the culture.

If nerd-dom disproportionately benefits whites, the gender disparity is even more alarming. Sexist behavior is rampant in the tech industry, as it usually is in male-dominated fields. A well-publicized low point was reached in 2013 with Titstare, a joke about an app that let men stare at women's boobs. Even the protagonists of Revenge of the Nerds were frat boys who were mainly interested in women as sex objects.

A few prominent nerds have made some attempts to fight this by encouraging more women to enter the tech industry - this would be good, since a larger number of women would mean a more welcoming environment for yet more women, as well as disapproval for public displays of sexism. But these efforts are struggling against the tide - very few women go into engineering. In some technical fields, like biology and neuroscience, there have been big strides - women are coming to dominate bio-nerd-dom. But engineering and software still seem like a man's world.

Worse, a subset of male nerds - not a majority but enough to get noticed - harbors an attitude of bitter sexual resentment. Many nerds grew up in the time when being a nerd conferred low social status, and suffered sexual rejection in high school or even later. Some of these men, predictably, became misogynistic as a result. Others simply developed unhealthy attitudes toward sex - witness the travails of MIT computer science professor Scott Aaronson, who expressed a yearning for a time when society would grant him a wife, and bitterly blamed feminism for his fear of romance.

This sexual resentment boiled over in hideously spectacular form with the coming of GamerGate. GamerGate began with a male nerd's bitter rant over his poor treatment by a nerdy girlfriend. The man quickly became a cause celebre for nerdy male gamers, many of whom feel like they have been ill-treated by the female sex, and many of whom are angry at what they perceive to be the intrusion of feminism into "their" gaming culture. The outpouring of male gamer anger quickly became a roach motel for the most vicious right-wing trolls on the internet. Severe harassment of female game designers and journalists evaporated much of the reservoir of cultural sympathy for geeks - and, since geeks and nerds overlap, for nerds as well.

If the Revenge of the Nerds means revenge on women, it's something we can do without.


So the past quarter century has brought the fruition of a childhood dream of mine - the accession of nerds to the mainstream of American society. But as with all successful revolutions, the victory has been bittersweet. I wanted an America that loves intellectual pursuits, and doesn't stuff people in trashcans for preferring math to football. What I didn't want was for nerd-dom to become an exclusive smoke-filled backroom for rich white men to sit around tossing around Ayn Rand quotes and calling themselves the ubermenschen. I didn't want Asian nerds to be sent to the basement to occupy the dingy desks once reserved for nerds of all races. I wanted the nerd to get the girl, sure, but I also wanted the nerd to be the girl. I wanted gamers to spend their time attacking Sephiroth or GlaDOS instead of attacking women on Twitter.

I believe that most nerds out there are good people. They just want to do their thing, same as they always did. Most of them are liberal types, who don't hate women, who would love to see diversity in their fields. It's time for them to stand up and take nerd culture back from the high-profile jerks who are getting all the air time, and open the gates to all those people who are still on the outside looking in.
Author: Noah Smith Posted at 12:28 AM