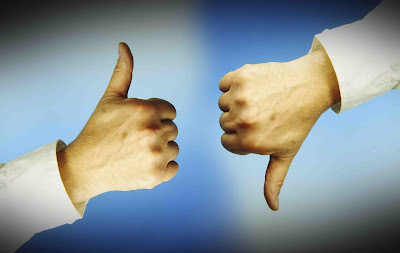 I wrote a post about lazy econ critiques, so some folks on Twitter were asking me "Which critiques do you think are good, and which are not?" So since I'm overjoyed when someone actually cares what I think enough to ask, I decided to make a list! Naturally, the critiques will be simplified and a bit straw-mannish, but you get the idea.

1. "Econ should stop pretending to be value-neutral."

Call me crazy, but I think researchers should try to keep facts and values ("positive" and "normative" econ) separate. They won't completely succeed, but they ought to try their best. No matter what your values are, you'll be better able to implement them if you know the facts as much as possible. That doesn't mean economists shouldn't have values, it just means they should try not to let those values interfere with their assessment of the facts.

"But dude, being anti-ideological is an ideology too!"

Mmm, an insightful and trenchant observation. Now go take another bong hit and leave me alone.


2. "Econ should stop pretending to be a science. It's just a SOCIAL science."

As for the idea that human beings can't be studied scientifically - well, you hear a lot of people say that, but it seems blatantly and obviously wrong. There are lots of models that predict human behavior very well in various areas. Not just in econ, either, but in operations research and other fields. So this critique is just incorrect.

Of course, the argument that econ ignored the importance of the financial system, leverage, etc. was totally valid, but much has changed since 2008 (see next section).

And I guess I'd like to see more academic macroeconomists express concern about the forecasting problem, but instead they've decided to just leave the job of forecasting entirely to the private sector (where tons of people are working on it).


5. "Econ focuses too much on equilibrium, which doesn't really exist."


Critiques That Used To Be Valid But No Longer Are

Not anymore, they don't!


Critiques That Are Less True Nowadays But Still Somewhat Valid

1. "Econ relies too much on theory, and not enough on data."

Empirics are on the rise. Theory is a smaller part of what econ does these days. I still see large numbers of wanky theory papers at seminars and such. But it seems like more and more of them are either A) job market candidates proving they're smart, or B) old folks having fun because they can. Nowadays, as Paul Romer says, "[I]n the new new equilibrium, empirical work is science; theory is entertainment."

But despite the decreasing flow of new theory, or at least prominent new theory, some econ literatures are still crammed with mutually contradictory models for which the scope conditions are neither known nor specified. And the stock of existing theories is still enormous. In some areas, especially in macro, economists really do have theories that make almost any prediction, with no real way to choose between them except priors and politics. And many economists still have very little problem using modeling assumptions that have already been taken to the data with discouraging results.

Also, as someone pointed out in the comments, econ models often sacrifice too much realism for the sake of tractability. If you have to publish theory papers, but it's too hard to get a result using solid assumptions, you go with silly assumptions. Hopefully the decreasing importance of model-making will decrease the pressure to pump out this kind of silliness.

Go back and read some papers from the 70s and 80s. They are much more obsessed with pointless mathematical rigor and aping the style of math papers.

Of course, that doesn't mean that econ uses math for good purposes. There's a lot of what Paul Romer calls "mathiness" going around.


3. "Econ is a front for neoliberal/laissez-faire politics."

This was definitely somewhat true for a while. Especially in the Cold War, where economists became part of the ideological opposition to communism. Milton Friedman and Friedrich Hayek really were the public face of the profession for a while. But since then, the profession seems to have drifted in a leftward direction, in terms of economists' views, the profession's public face, and probably the implications of the results in econ papers.

There are still a few old Cold Warriors left, of course. There is still a lot of Koch money being funneled to certain econ departments and think tanks. There is probably still a subset of economists who were drawn to the profession because it seemed more conservative than other areas of academia. And there are still the Austrians, running around pretending to have something to do with the profession.

Yep, but it's clearly getting better, thanks to increased awareness and to the efforts of the AEA and other organizations.


5. "Econ colonizes other social sciences while ignoring their input."

My sense is that the Gary Becker project, of trying to understand social/cultural phenomena with standard econ models, is not doing so hot these days. You still see a lot of this on blogs and in pop econ books, but within the profession it seems generally recognized that things like norms and social preferences drive a lot of social phenomena. The problem with Becker stuff, as I see it, was that it focused too much on very standard, classic types of utility. Once you start bringing in new kinds of utility like norms and social preferences, those utility choices end up driving the results completely, and fancy econ techniques become only marginally useful. But it still sells pop books.

As for not taking input from the other social sciences, econ is still very siloed. Behaviorists have taken some input from psych. And poli sci methods and econ methods are converging so much that they are often indistinguishable at this point, in certain fields. But econ still ignores the existence of sociology entirely. Hopefully, as empirical methods become unified in sociology and econ, this will change.


6. "Econ is enslaved to the financial industry."

There has definitely been some corruption. Incentives matter, obviously. I don't think it was ever that widespread - most economists have nothing to do with finance - but there was a bit. But the AEA instituted a stricter ethics code in 2012, and there is more scrutiny of economists who do sponsored research. So the problem seems like it's being addressed.

RE doesn't seem to be a very good assumption, except sometimes in the long run when you also have some lucky properties like time-invariant stochastic processes. It is very true that in the past, economists - especially in macro - were essentially forced to assume RE. Nowadays we are definitely seeing more deviation from that orthodoxy - Bayesian and non-Bayesian learning models, bounded rationality models, and other stuff. This critique is still mostly valid, though.

1. "Econ spends too much energy on macro."

Yep. Seems like macro is about a quarter of the econ profession. But given data limitations, a lot of that effort seems to go into making useless models. Macro is the glamour division of econ, but maybe more economists should avoid the glamour and get down in the muck where there are real conclusions to be had.

Definitely. This is a problem plaguing much of academia. In math and physics there are natural barriers to entry, because getting stuff right, though possible is just really hard, so only really smart people can enter those fields. In lab sciences, huge fixed costs are the barrier, with a fairly high degree of smarts also required. But in social sciences and humanities, there are fewer natural barriers, so the practitioners have to create them in order to increase their monopoly rents.

One way to do this is hyper-specialization. You see a lot of this in history, for example. Another way is to make up a ton of bullshit neologisms and spend all day arguing over what they mean, which requires defining them in terms of other neologisms, ad infinitum. This seems to constitute most of "critical theory". But a third method is to artificially increase the level of intelligence needed to do work in your field. This seems to be the approach taken by econ, where people who will spend their careers digging up natural experiments to test simple linear models are nevertheless forced to learn what a sigma algebra is. It also might be the reason for the use of purely mathematical methods to study every possible problem, even when those methods may not help or illuminate. It might even be one reason for the turgid, impenetrable style of many econ papers...

Well, when you get paid more than almost any other academics, constantly sought after for policy advice, and treated as a sage on every conceivable topic from how to find a good restaurant to how to find a good spouse, you do tend to get a little full of yourself! :-)


4. "Economists believe their theories too much."

"Models are just tools for understanding specific situations," says every economist who believes his own models are The Truth And The Way.


Critiques Of Whose Validity I Am Not Really Sure

There's some evidence to this effect, but it doesn't seem conclusive.


2. "Economists need to get out and have more contact with the real world."

3. "Economies are complex adaptive systems, hence you will never be able to understand them."

I'm not sure about this, since Econ 101 must be taught very differently at different schools. The only thing I really know that is constant across schools is the identity of the most popular 101 textbooks. And Mankiw and Krugman's textbooks are pretty good, I think, although they're almost all theory and very little about empirical evidence. That's something I'd like to see change at the 101 level, for sure.


Anyway, off the top of my head, there's my list. Anyone have any more you'd like me to add? Leave them in the comments!
Author: Noah Smith Posted at 4:39 AM