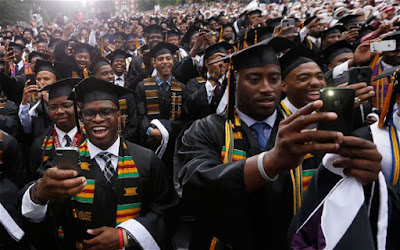 The other day, I noticed something disturbing in a graph from a Brookings report on immigrant mobility:

We see that Hispanics are strongly upwardly mobile from the first to the second generation. Asians are slightly upwardly mobile, but from a pretty high base. Those are both good news. But black immigrants, on average, appear to show downward mobility.

Why would black immigrants be downwardly mobile? I posed the question on Twitter. A smart person called Abraham Bloodshack immediately tweeted this to me:

generational effects? i.e., recent increase in African migration could mean second gen are all quite early in careers

That was smart. We'll follow up on that later. But first, let's review some possible explanations for the mobility disparity:

3. Downward assimilation. With many immigrant groups we see the 2nd generation picking up a lot of "bad" behaviors - or at least "bad" for earning power - from their decadent rich-world peers. These include things like not getting married, sponging off parents, and getting involved in the underground economy. 2nd-generation black Americans might be especially susceptible to this sort of thing. (And yes, I know "downward" might be a loaded word; if you want to sponge off your parents and play League of Legends, more power to you.*)

4. Racism. Negative attitudes toward African-Americans might not apply to people with African or Carribean accents, but might be applied toward their more American-sounding kids. (Update: See this excellent comment for more.)

I did a bit of digging on the ol' internet, and turned up this Tyler Cowen post on the subject, from two years ago. Cowen links to two papers (paper 1, paper 2) by Alison Rauh, a Chicago econ PhD, now a research associate at Cornerstone.

The papers look at personal income, so we don't have to worry about the household size issue. They find broadly the same average income decrease as the Brookings graph, though to a lesser extent. Rauh's first paper attributes the difference to "idleness", her word for "being out of the labor force". Conditional on having a job, 2nd-generation black Americans earn a lot more than 1st-generation - for men, 29 percent more. That's roughly comparable to the average Hispanic increase from the Brookings graph, but from a much higher base. But so many 2nd-generation black Americans are out of the labor force that the overall average income goes down!

I take this to be a “peer effects are really really important” paper, namely that many of the virtues of immigrant culture are swallowed as the second generation assimilates.

But this isn't the whole story. In her second paper, Rauh looks at what happens when the generations are adjusted for age, as Abraham Bloodshack might have suggested doing. Here is what she finds:

In other words, the Brookings graph tells us the wrong story! A lot of those 2nd generation black Americans are either in college, or just starting at the bottom of the career ladder. They will eventually make a lot more money. This is great news.

These facts all point to a cultural effect - societal racism and/or downward assimilation, in some combination. Black immigrants are thriving in our society overall, but it's in spite of some headwinds.

Anyway, let this be a lesson: Before you go looking for theories to explain a fact, make sure you've gotten the fact right in the first place!