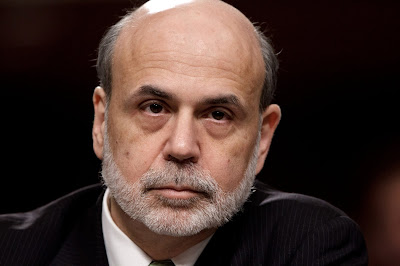 I thought it would be interesting to post a private-sector economist's views on macroeconomic policy. So here's a guest post by Gerard MacDonell, who was an economist at Point72 Asset Management, (previously SAC) from 2004 through 2015:


"So Much for the QE Stimulus"

Last month’s Press Release from the FOMC announcing the first rate hike in a decade contained a seemingly-innocuous and yet telling discussion of the interaction between interest rate and balance sheet policy.  It marked the end of false confidence in the efficacy of quantitative ease (QE), which can be traced to a technical error Ben Bernanke made while lecturing the Japanese on deflation in 1999.

The passages above were not a major departure or surprise to the markets, but they confirm that the Fed leadership has now abandoned its original story about how QE affects the economy and has conceded that the tool is weak.  If QE were strong, the balance sheet could not remain large even as the Fed promised to raise rates only gradually.

It has long been obvious that QE operated mainly through signaling and confidence channels, which wore off on their own without any adjustment in the size or composition of the Fed’s balance sheet. Accordingly, QE cannot be relied upon to provide much help in the next economic downturn, which means the Fed will have to tread carefully to avoid a return to the zero bound.

The story initially told by the Fed leadership starts with the claim that large scale asset purchases (LSAPs) reduce the term premium and expected returns in government securities, by removing default-free interest rate duration from the capital markets.  This is meant to encourage portfolio flows out of government securities and into corporate debt, equities and foreign currencies. And the resulting easing of financial conditions is supposed to stimulate spending to reduce unemployment, contain deflation risk and eventually push inflation back to target.

That story does not hold much water. The theoretical foundations supporting QE were invented – or really revived from the 1950s – in an effort to justify a program that had been resolved upon for other reasons.  LSAPs did not actually succeed in reducing the stock of government rates duration because they were fully offset by the fiscal deficit and the Treasury’s program of extending the maturity of the federal debt. And while the estimated term premium and bond yields did go down during the QE era of late 2008 through late 2014, they had a disconcerting tendency to rise while LSAPs were ongoing.  This latter point squares with contemporary finance theory but not with the 1950s-style portfolio balance channel asserted by the Fed, which presumes more durable segmentation than applies to US government securities.

There are still believers in the QE story, in both academia and the markets.  However, the Fed has abandoned the flock it once led.  If the leadership still believed the official story, it could not promise both to maintain the size of the balance sheet and raise rates at an historically slow pace.  That would deliver far too much stimulus, particularly with the economy now near full employment. The obvious way to square this circle to recognize that the Fed does not believe the story, which is an advance.

Peak QE gullibility seems to have been reached in the late summer of 2012, with Ben
Bernanke’s presentation to the Kansas City Fed’s monetary policy conference at Jackson Hole.  In that speech, the Chairman asserted that the first two rounds of LSAPs plus the maturity extension program (to that point) had reduced 10-year Treasury yields by 80 to 120 basis points.

Since these comments were made, further maturity extension and the third round of QE have raised the total stock of rates duration on the on the Fed’s balance sheet (measured in 10-year equivalents and as a share of GDP) by about 50%.

So assuming assuming a linear relationship between QE and yields, the estimated impact of the entire QE program would be a reduction in the 10-year Treasury yield of 120 to 180 basis points. That is a lot.   Moreover, according to the original story, little of this presumed stimulus would unwind without asset sales or a passive shortening of maturities, both of which have largely been excluded for now.

Roughly around the time of QE3, it became fashionable to measure quantitative ease in terms of a fed funds rate cut (below zero) that it effectively equated to. Thus was born – or again revived – the so called shadow fed funds rate.  In fairness to advocates of the concept, some of whom were Fed officials, the shadow rate was estimated with bond yields and was not just the result of an accounting exercise chopping presumed QE effects off the nominal funds rate.

Still, the fashion was to ascribe the negativity of the shadow rate largely to the LSAPs or what we call QE.  Estimates of the shadow funds rate at the conclusion of the LSAPs in late 2014 ranged from -2 to -5%, which meant -- if taken seriously – that the Fed would have a lot of wood to chop once the time to tighten policy had arrived.

Readers of this comment may recall those charts circulated by Wall Street showing the fed funds equivalent going deeply and shockingly negative after 2009. In retrospect, those charts are cringe-inducing and best forgotten.  It is a mercy that the Fed has participated in the forgetting. For those who do not want to forget, the estimated shadow rate has recently spiked to around the nominal funds rate, even without asset sales from the Fed’s balance sheet. Oops.

This raises the question of why the Fed initially promoted a story that so obviously would not stand the test of time.  We can imagine three possibilities, the third of which is the most speculative and, if true, the most interesting.

The first possibility relates to the first round of event studies, which measured the immediate effects on the term premium and bond yields of QE-related news.  The initial application of QE occurred in the context of financial crisis and unusually high market segmentation, even in Treasuries, so those event studies understandably found large effects.

Announcement effects are a poor measure of fundamental effects that will endure long enough to affect the economy, particularly when markets are functioning normally, as they roughly have since mid-2009.  The reason is that markets typically act more segmented in the short run than over time, and this is particularly the case in the market for government securities.  But smart and credentialed people argued otherwise and the FOMC may have been comforted by that.

The second possibility is that the Fed wanted to raise confidence in the markets and real economy and thus chose to communicate that it was wielding a new and fundamentally powerful tool, even if Fed officials had their own doubts.  Unlike in the case of the term premium and bond yields, there is compelling evidence that applications of QE led to durable changes in equity prices and inflation expectations that may have been somewhat stimulative.

It is best to lift confidence with tools that have a mechanical force and do not rely purely on confidence effects. But if such tools are not readily available, then it probably does not hurt to try magic tricks and pyrotechnics.

The problem looking forward is that people may not be so responsive to the symbolism of QE next time around.  After all, the Fed is now revealing its true or updated beliefs, which may be hard to cover back up come the next downturn.  Moreover, the Bank of Japan has got hold of QE, which raises the odds it will be properly discredited, if history guides.

The third possibility involves some “blue-sky thinking”, to steal a term Ben Bernanke used in his book, The Courage to Act.  It is possible, although unproven, that Bernanke and his colleagues in Fed circles were durably confused by Bernanke’s early and mistaken relation of the Quantity Theory to the efficacy of LSAPs.

He made this mistake most famously in his 2002 Helicopter Ben speech, but it is easier to identify in his 1999 essay lecturing the Japanese on how to escape deflation.  To motivate his recommendation of LSAPs and other stimulative measures the Japanese might take, Bernanke made the following points:


The general argument that the monetary authorities can increase aggregate demand and prices, even if the nominal interest rate is zero, is as follows: Money, unlike other forms of government debt, pays zero interest and has infinite maturity. The monetary authorities can issue as much money as they like. Hence, if the price level were truly independent of money issuance, then the monetary authorities could use the money they create to acquire indefinite quantities of goods and assets. This is manifestly impossible in equilibrium. Therefore, money issuance must ultimately raise the price level, even if nominal interest rates are bounded at zero. This is an elementary argument, but, as we will see, it is quite corrosive of claims of monetary impotence.

There are a couple striking aspects of this passage.  For starters, Bernanke attempts to port the spirit of inevitability implicit in the Quantity Theory over to the idea of LSAPs. This is inappropriate because there is no quantitative aspect to the program, as Bernanke himself would later insist, while assuring us that QE would not be inflationary. But one must wonder if this misapplication of the Quantity Theory to LSAPs created in Bernanke and associates an excessive confidence in the efficacy of the program.  As late as 2002, he seemed to believe there was a sense in which simple logic implies LSAPs just had to work as a matter of “elementary” quantitative logic.

Separately and amazingly, Bernanke actually makes a technical error of economics when he claims that increments to the money stock, as he defines it, always have an infinite maturity.  A rise of the monetary base will indeed have infinite maturity if it driven by normal economic growth and the Fed successfully pursuing its inflation objective. In such a situation, gains of the monetary base will show up in higher currency in circulation and (to a lesser extent) a rise of required reserves.

However, that is not really relevant to the case for LSAPs. Increases of the narrow money stock driven by a surge in excess reserves to fund asset purchases designed to drive the economy out of liquidity trap do not have infinite maturity.  Again, Bernanke would later argue this point himself, and demonstrate it by paying interest on excess reserves, thereby by converting them from money to debt. Bernanke’s money injection actually had ZERO maturity.  Or more to the point, it did not even happen.

The only way LSAPs could be considered a quantitative operation would be if the scale of them communicated something about the tolerable inflation rate. But this was specifically excluded in 2012 when Bernanke and colleagues on the FOMC formalized 2% as the unchanged inflation objective.

The Fed leadership has come a long way from believing that QE had something to do with the power of the printing press to a recognition that the program is a combination of an indirect and transitory rates signal, a confidence game, and a duration take out that probably achieved much less than was advertised. But at least the journey has been made, which has reduced the risk of a contractionary policy error.