Much of econ has become more scientific

My employers, the editors of Bloomberg View, have an editorial out called "Why Not Make Economics a Science?". I like this post, it gets at a very important point. But I think it leaves some very important things out, too.

The article's main criticism of econ - or really, of macro, which most people casually call "economics" - is that it seems reluctant to discard theories:


[T]oo many theorists...have drifted far from the real world...Before the 2008 financial crisis, for example, the standard models more or less ignored finance...Given such spectacular failures, you’d think the profession would have gone back to the drawing board. It hasn’t. True, some tweaks have been attempted...But the error at the core of modern macroeconomics -- that mathematical consistency matters more than empirical relevance -- prevails...Reviving economics as a science will require economists to act more like scientists. If models are refuted by the observable world, toss them out. Rely on experiments, data and replication to test theories and understand how people and companies really behave.

As you can tell from the links (the post itself has many more), the editors have done their homework.

The editors are right that mainstream macro theory hasn't changed much since the crisis - the addition of finance, though important, really is a tweak to the basic structure. Central elements like the consumption Euler equation, TFP shocks, Calvo pricing, infinite forward-looking-ness, exponential discounting, profit-maximizing firms, etc. are still really common in DSGE models, despite the steady drumbeat of evidence against many of these assumptions. And DSGE models, though a tiny bit less popular than at their peak, are still really common in the literature: 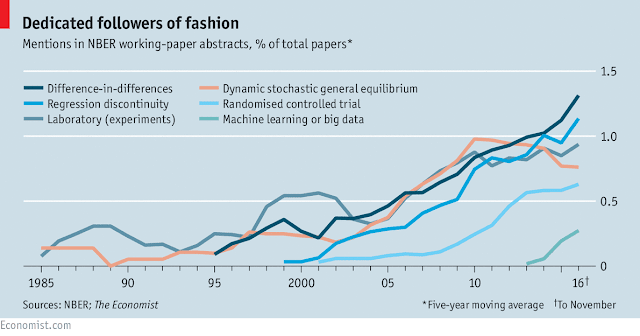 The editors are right to be annoyed that the basic DSGE framework has only been tweaked, instead of rethought from the bottom up. Imre Lakatos would probably agree. Science should be about tossing out theories, not generating infinite numbers of theories to sit on the bookshelves gathering mold.

But I also think this brief editorial leaves out a few important things, which I'd like to remind people about:


1. Most economics is not macro.

In the press, we have a tendency to use "economics" as a synonym for "macroeconomics". There are a couple reasons for this. First, it's tedious to keep writing "macroeconomics". Second the only branches of econ that the public traditionally cares a lot about are macro and trade, and maybe a little about finance. Now people are starting to care a bit about labor too, which is good. But relatively few readers care about game theory, decision theory, industrial organization, development economics, public finance, economic history, environmental econ, ag econ, urban econ, etc.

The Bloomberg View editors know this distinction, which is why they specify in the article that they're talking about macro. But many economists in other fields will tend to read this editorial and get annoyed, since it leaves them out. In fact, as many of us Bloomberg View writers have noted, the non-macro parts of econ are now mostly empirical, and empirical econ is looking more and more like a standard science (i.e., very careful attention to controls). So it's important to remember that.


2. The definition of "macro" is part of the problem.

If you look at what academic macroeconomists - that is, the professors in the macro areas of econ departments - are doing, a lot of it now is pretty empirical. For example, macroeconomists might try to determine whether sticky prices or sticky wages matter more in business cycles, or why companies don't hire more young workers during recessions. Each paper of this sort will typically focus on understanding one piece of the macro puzzle. They'll have theory sections, but the theory will be limited to the phenomenon in question - it won't be a big general model of the whole economy.

Unfortunately, we often use the term "macro theory" only to refer to the big, general models of the whole economy. And since DSGE models are still the main type of big, general model of the whole economy (OLG would be a distant second, and most people don't call VARs "theory" at all), this means that "macro" now means "DSGE" almost by definition. Until someone comes up with a type of theory that isn't called "DSGE" and it gains credence as an alternative (for example, "agent-based" models), macro theory will by definition consist only of tweaks.


So while the Bloomberg View editors are right to be annoyed at the fact that mainstream macro theory hasn't changed much in the past decade, we should all recognize the big changes that have taken place not only in econ as a whole, but even within the macro area itself. No, there hasn't yet been a replacement for the basic Ed Prescott-inspired business-cycle modeling framework. But lots of other important work is being done, much of it very scientific.
Author: Noah Smith Posted at 11:28 PM