The Wrongness of Raghuram Rajan 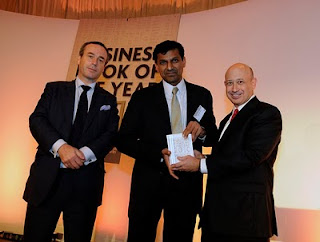 Since the crisis, Raghuram Rajan has emerged as the "reasonable conservative" voice of the econ blogosphere. Although many of his points are quite contentious (e.g. that the housing bubble was caused by govt. policies to help poor people buy houses), he has analyzed the crisis in a thoughtful and dispassionate manner. That said, I think he is often very, very wrong.

Consider, for example, his answer to the question of why economists failed to predict the crisis:


Why did academic economists fail to foresee the crisis?

There have been several responses to that query. One is that economists simply lacked models that could account for the behavior that led to the crisis. Another is that economists were blinkered by an ideology according to which a free and unfettered market could do no wrong.

Finally, an answer that is gaining ground is that the system bribed economists to stay silent.

In my view, the truth lies elsewhere.

Rajan's rebuttals to these contentions are startlingly weak. Let's start with his defense of economists' models:

It is not true that we academics did not have useful models to explain what happened. If you believe that the crisis was caused by a shortage of liquidity, we had plenty of models analyzing liquidity shortages and their effects on financial institutions. If you believe that the blame lies with greedy bankers and unthinking investors, lulled by the promise of a government bailout, or with a market driven crazy by irrational exuberance, we had studied all this too, in great detail.

What he's saying is not technically wrong. Yes, economists did have models that could describe something a bit like the crisis of 2008 (or, more often, one small piece of it). But - and Rajan utterly ignores this fact - those models were not widely used by members of the economics profession as the basis for policy advice!

You just did not see Larry Summers or Greg Mankiw or Alan Greenspan or other prominent policy advisors saying: "Look, economists have this model that predicts liquidity shortages, and we think there is a real danger that one could happen if a bunch of these complex derivatives go bust." Or take Ben Bernanke who became famous for inventing the "financial accelerator" model, which explained how debt crises could spill over into the real economy. Did we ever see Bernanke using that model as a basis to push for limits on bank leverage during his tenure as Fed chairman? No.

In my opinion, the problem is not that economists lack a wide variety of models, but that they lack the means by which to choose between these models. When push comes to shove, economic advisors go with their gut instincts, selecting the model that they think tells the most plausible "story". In practice, this means models that don't rock the boat. Furthermore, acclaim and recognition are often given to the modelers who pioneer new mathematical tools, even if their models are terrible at describing the real economy (Ed Prescott's Nobel-winning "real business cycle" model comes to mind).

Rajan completely ignores all this.
Now let's look at Rajan's rebuttal to the idea that free-market ideology blinded economists to the dangers of a crisis:

Perhaps the reason was ideology: we were too wedded to the idea that markets are efficient, market participants are rational, and high prices are justified by economic fundamentals. But some of this criticism of “market fundamentalism” reflects a misunderstanding. The dominant “efficient markets theory” says only that markets reflect what is publicly known, and that it is hard to make money off markets consistently – something verified by the hit that most investor portfolios took in the crisis. The theory does not say that markets cannot plummet if the news is bad, or if investors become risk-averse.

Rajan seems to be arguing against his own point here! As he notes, efficient markets theory says that crises cannot be predicted in advance. As an explanation of why economists failed to predict the crisis, the fact that many of them believed that crises can't be predicted sounds rather plausible, does it not?
He continues:

Critics argue that the fundamentals were deteriorating in plain sight, and that the market (and economists) simply ignored it. But hindsight distorts analysis. We cannot point to a lonely Cassandra like Robert Shiller of Yale University, who regularly argued that house prices were unsustainable, as proof that the truth was ignored. There are always naysayers, and they are often wrong. There were many more economists who believed that house prices, though high, were unlikely to fall across the board.

So, the crisis must have been unpredictable, because most economists failed to predict it. So of course most economists failed to predict it - after all, it was unpredictable! Wow. This is just about the tightest loop of circular logic that it's possible to make.
Finally, we have Rajan's reasons why corruption in the profession was not a big part of the problem:

Could it be corruption? Some academic economists consult for banks or rating agencies, give speeches to investor conferences, serve as expert witnesses, and carry out sponsored research. It would be natural to suspect us of bias. The bias could be implicit: our worldview is shaped by what our friends in industry believe. Or it may be an explicit bias: an economist might write a report that is influenced by what a sponsor wants to hear, or give testimony that is purely mercenary.
There are enough instances of possible bias that the issue cannot be ignored...But I believe that corruption is not the main reason that the profession missed the crisis. Most economists have very little interaction with the corporate world, and these “unbiased” economists were no better at forecasting the crisis.

Rajan is defining corruption rather narrowly here. Although few economists were probably complicit in actual wrongdoing, the conflict of interest is widespread and fundamental. The finance industry provides the main source of non-academic employment for economists; this demand pushes up the salaries of econ professors everywhere (econ profs are very well paid compared to most other fields). For an academic economist, suggesting that the finance industry should be curbed, shrunk, or regulated is equivalent to advocating the devaluation of his/her own profession.

Economists didn't have to be corrupt to ignore the dangers of a crisis; they just had to be self-interested in the normal sense. (Note: the pic at the top is of Rajan receiving a "Business Book of the Year" award from the CEO of Goldman Sachs. Interpret that as you will.)

After making this string of highly dubious points, Rajan goes on to point out some alternative reasons for economists' failure: overspecialization within the profession, the "ivory tower" disconnect, and the difficulty of forecasting a chaotic system like the macroeconomy. These are good ideas, and I believe that they all played some role. But I think that the failure of macroeconomics is multidetermined. And Rajan has just not done a good job of refuting the notion that a great many economists were ignoring relevant models, blinkered by ideology, and struggling with conflicts of interest.

Is this really the best defense the "reasonable conservative" economists can muster?
Author: Noah Smith Posted at 6:12 PM