Libertarianism is a "low-end" strategy of state formation 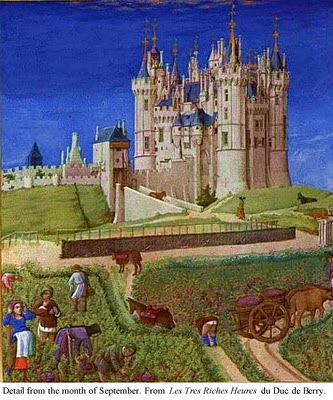 Reading Ian Morris' Why the West Rules -- for Now, I was struck by the following passage:

In a nutshell, the Eastern and Western cores avoided collapse in the first millennium BCE by restructuring themselves, inventing new institutions that kept them one step ahead of the disruptions that their continuing expansion itself generated.

There are basically two ways to run a state, what we might call high-end and low-end strategies. The high end, as its name suggests, is expensive. It involves leaders who centralize power, hiring and firing underlings who serve them in return for salaries in a bureaucracy or army. Paying salaries requires a big income, but the bureaucrats’ main job is to generate that income through taxes, and the army’s job is to enforce its collection. The goal is a balance: a lot of revenue goes out but even more comes in, and the rulers and their employees live off the difference.

The low-end model is cheap. Leaders do not need huge tax revenues because they do not spend much. They get other people to do the work. Instead of paying an army, rulers rely on local elites—who may well be their kinsmen—to raise troops from their own estates. The rulers reward these lords by sharing plunder with them. Rulers who keep winning wars establish a low-end balance: not much revenue comes in but even less goes out, and the leaders and their kin live off the difference. (emphasis mine)

There is not much economic analysis in this discussion of "high-end" and "low-end" strategies. Morris is a historian. He doesn't really try to answer the question of why the taxes and bureaucracy of "high-end" strategies might enable a state to grow and prosper, instead of dragging it down with inefficiency and deadweight loss. Thus, it might seem strange to economists that Morris would so naturally assume that "high-end" strategies can be a very good thing.
But we should not dismiss Morris' observations simply because they don't square with our conventional wisdom. After all, Econ 101 provides a perfectly plausible theoretical reason why "high-end" strategies might succeed better than "low-end" ones. That reason is public goods. The tax money that governments take in doesn't all get wasted or mailed off as Medicare or welfare checks. Some of it goes to pay for roads, courts, police, schools, research, and a bunch of other very important things that private companies cannot or will not provide in sufficient quantity. If high-end states outperform low-end ones, it is because they provide the public goods that low-tax, low-spending governments can't create.
Now let's think about libertarianism. The modern American libertarian movement seeks to minimize taxes, government spending, and the size and scope of the bureaucracy. In the view of this movement, public goods either don't really exist, or aren't worth the price, or can be efficiently provided by private actors (charities, etc.). The alternative libertarians favor is exactly what Ian Morris calls a "low-end" strategy. Low taxes will be matched by low spending; private security contractors will replace many of the functions of the army, police, and prison system; schools will be privatized; basic research will simply be neglected; tort reform will limit the role of courts; and as for roads, who knows. To the extent that they voluntarily give away their wealth, rich individuals will assume the "noblesse oblige" role of the feudal lords of old. The Bush Administration even discussed returning to that lowest of low-end techniques: tax farming.
Why are we seeing so many smart people calling for a return to statehood-on-the-cheap? Most observers blame either the vanishing nationalism of a globalized elite, or the ethnic fragmentation of the American voting public. I give credence to both of these. But it may also be the case that libertarianism is simply a response to what Ian Morris calls the "paradox of development":

[P]eople’s success in reproducing themselves and capturing energy inevitably puts pressure on the resources (intellectual and social as well as material) available to them. Rising social development generates the very forces that undermine further social development. I call this the paradox of development.

High-end states that succeed in times of economic expansion can fail dramatically in times of stagnation or contraction. As growth hits its limits, the big bureaucracies that helped generate and stabilize the growth are no longer needed...but institutional momentum keeps them around past their sell-by date, dragging the economy down with inefficiency until a breaking point is reached, and a high-end state collapses into a new low-end equilibrium.
That is Morris' view, and I agree with it.
Are the U.S., Europe, and Japan running up against this paradox? Many argue that our best days are behind us - that resource limits, or the natural slowing of scientific discovery, are putting an end to the dizzying growth of the Industrial Revolution. Even if you don't believe those theories, it's hard to ignore the stagnation of wages in rich countries over the past few decades. If stagnation is here to stay, maybe a high-end state just doesn't make sense anymore.
This is, basically, the libertarian thesis. I'd like to point out that it is a profoundly pessimistic one - instead of "morning in America," it's twilight as far as the eye can see. The best we can hope for is the little one-time bump we get from eating the institutional capital we built up during the Industrial Revolution - and even that is pretty much used up at this point. The Reagan/Thatcher/Koizumi revolutions cannot be repeated.
What's more, I can't easily dismiss this thesis. Is there definitive proof that a big, active government is still the best way to go? Not that I know of! Looking at history gives us only anecdotes, not data. Sure, it's true that the richest, fastest-growing states in history were all high-end (ever see a country get rich without government-build roads?), but the causality could run the other way; high-end states might simply be the best response to an era of plenty.

Libertarianism's detractors, of course, can cite recent empirical studies showing the net economic benefits of government investment in highways, rail, digital infrastructure, and R&D. We can point to the negative results of privatization of the prison system, and the high costs of replacing the military with mercenary contractors. And we can point out that our productive power is not nearly as stagnant as our earnings (which hints that our "stagnation" does not mean we're hitting a technological ceiling).
We also have some anecdotal evidence that a strong state still beats a weak one. Of all rich economies, Germany has done the best lately, boosting employment even in the middle of a global recession. Many credit Germany's strategy of export promotion and vocational education. This seems like activist government at its best. (Update: I may have spoken too soon with this example!)
But in the end, this evidence cannot crush the libertarian case. The specter of decline looms a bit too frighteningly. The neoliberal reforms of the 80s look a bit too much like a worldwide phenomenon. It is hard to forget Bill Clinton saying that "the era of big government is over."
Anyway, the debate over what kind of state we should have will continue to rage. But at least we can keep it honest. Libertarians like to paint liberals as a bunch of socialists obsessed with redistribution at the cost of efficiency. But many (most?) of us are just people who think that the high-end model of state formation - an active, growth-oriented government providing public goods - is still better than the low-end alternative. Maybe not as clearly better as it was in the 50s and 60s. But still better. Maybe.
Author: Noah Smith Posted at 9:09 PM