Past performance is no guarantee of future results

"Past performance is no guarantee of future results." This is the most common caveat in finance. It means that, despite the fact that past and future are often correlated, that correlation is no guarantee; something may happen in the future that never happened in the past. In technical terms, economic and financial processes might not be ergodic.
This is why, unlike Mark Thoma, I am not reassured by a long-term plot of United States gross domestic product. Dr. Thoma writes:

As you can see from this picture, historically we've always recovered from recessions. Eventually. ... I am confident that we'll return to trend this time as well, the question is how long it will take us to get there.

He illustrates this with the following famous graph:

The idea is that because this graph sort of looks like a straight line (although if you look closely, you'll see that it's not!), that it will continue to look sort of like a straight line into the future.
But off the top of my head, I can think of no good reason to think that this is true. The kinda-sorta stability of the long-term U.S. GDP growth rate is not a law of the Universe, like conservation of momentum, which is (we hope) fixed and immutable. It is a past statistical regularity whose underlying processes we don't fully understand. There may be solid, long-term factors that will keep our growth at this "trend," or there may not.
Here, check out a long-term graph of Japan's GDP, in levels:

Looks a bit different, eh? If you looked at this graph in 1996, you would expect Japan to return fairly rapidly to the exponential growth "trend" it had enjoyed up until 1995. Instead, Japan's GDP has remained flat in since then (this is also true in real terms). Here's a picture of Japan's real GDP growth rate over time: 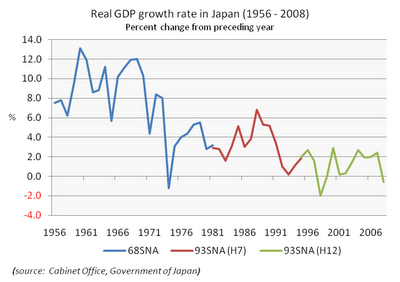 Japan's growth history looks very different from ours. It seems to have suffered some "trend breaks" in growth. And my question is: Why should we believe that this will not happen to us?
One common answer is that long-term growth for a mature economy will continue at roughly the rate of technological progress. But this is a tautology, since economists measure "technological progress" simply as the the long-term rate of GDP growth. This leads some economists to look at slowing growth and conclude that technological progress is slowing. And maybe they're right! The point is that whether long-term growth represents "technology" or some combination of underlying processes, there is no law of the universe that says that these processes grow at a constant exponential rate.
And in addition to "trend breaks," there is no guarantee that U.S. GDP does not also contain unit roots. In other words, the assumption that the dip in U.S. output that we call the "Great Recession" will be made up for by fast growth in the future is unfounded. Even if the U.S. returns to its "trend" growth rate of 2 or 3 percent, there seems to me to be no good reason to believe that it will return to its trend level.
So no, this graph does not ease my worries. Past performance is no guarantee of future results. It may well be that a return to our "trend" growth rate, and/or a return to our "trend" level of output, may be contingent on our policy choices. At least, I am not willing to assume that that is not the case...


Update: I don't want to mislead with the Japan graphs. In per capita terms, the growth slowdown since the mid-90s is much less pronounced. And before the 70s, Japan was well below the richest industrialized nations in per capita GDP, so its mid-70s slowdown is to be expected. But my point about Japan was that the U.S. long-term GDP plot, which is so often used to predict a return to 2-3% growth, is not particularly universal.

Update 2: What "policy choices," you may ask? Well, the answer is that I don't know. My instinct says that clinging to an increasingly broken health care system can't be good for long-term growth. The first-ever U.S. debt default, which Republicans look ever more eager to flirt with, might end our special place in the global economy. Accepting a permanently lower level of taxation and spending might starve the nation of infrastructure and R&D, thus reducing our trend growth. Just some thoughts.

Update 3: I see that G.I. over at The Economist has said much the same thing. And wow...the drops in output in Sweden and South Korea following those countries' financial crises sure look like unit-root drops to the naked eye!

Update 4: Mark Thoma writes a very long and good post about the "return to trend" controversy, which also cites other long and good posts by Brad DeLong, Greg Mankiw, and Paul Krugman. Definitely read it! And, of course, it almost goes without saying that I think we should try our best to boost output back to the "trend," whether or not that would happen on its own.

Update 5: Brad DeLong has a graph of UK GDP that also shows that "returns to trend" are not universal.
Author: Noah Smith Posted at 7:47 PM