PSST: The end of economics as we know it 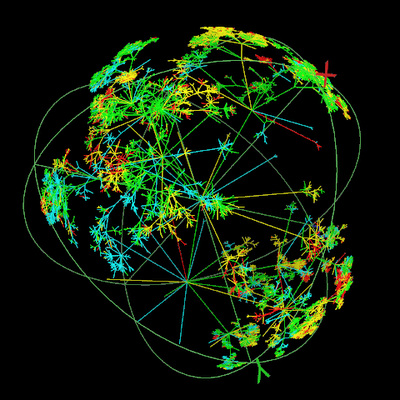 (Note: I wrote this post quite a while ago, and never published it. Since I'll be mostly too busy to blog for a few weeks, I've decided to publish some of these old "backup posts"...)

Since the recession began, Arnold Kling has been trumpeting a very non-traditional way of thinking about the economy. At first this went by the name of "recalculation," but Kling has now settled upon "PSST," which stands for "Patterns of Sustainable Specialization and Trade." This idea has generated a lot of interest in the blogosphere, and I personally find it extremely appealing, if daunting. Before I discuss it, I'll let Kling sketch the idea in his own words:

Regular readers know that I am trying to nudge them toward a different paradigm in macroeconomics. I want to get away from thinking of economic activity as spending, and instead move toward thinking of it as patterns of sustainable specialization and trade...


Instead, I think that the right tools to use for macro are the two-country, two-good models of international trade. The "two countries" could be two sectors within an economy...

At full employment, both countries are taking advantage of specialization and trading with one another. When something happens to adversely affect the pattern of trade, some workers shift from market activities to non-market activities, mostly in the form of involuntary unemployment. Gradually, new patterns of specialization and trade emerge, and full employment returns. That is what I have been calling the Recalculation Story.

Every first-time econ student who has ever been presented with a macroeconomic aggregate probably has some variant of this reaction. Economies are just too complex to be modeled with this handful of variables! Then someone raises his hand and asks the Teaching Assistant if that isn't the case, and the Teaching Assistant shakes his head and says "Yeah, well, just try to model a complex system like that and see how far you get!"
Because it is hard. The two-country, two-good model of international trade is not going to do the trick. In that model, adjustment is instantaneous if you make all the standard assumptions that you make in the one-sector model (flexible prices, etc.); there is no need for down time as agents recalculate and patterns re-adjust. And in fact, New Keynesian macro people have been using multi-sector models for a long time (as an example, see this paper), and those models never have any "recalculation."
To get recalculation, you are going to have to make your model much more complex - so complex, in fact, that the interactions between sectors or industries become more important to the movement of macroeconomic aggregates than the movement of aggregate variables themselves, and things like recessions and booms become emergent phenomena. This will require you to delve into the world of complex systems. It will be a breathtaking break with basically all of establishment economics.
And that break might well be necessary. As traditional macro models have failed to yield much in the way of predictive usefulness, some economists have been sprinkling flavors of complex systems into their models. Prime examples (that I know of) would be Krugman, Fujita, & Venables' "New Economic Geography" and Charles Jones' "linkages and complementarities" theory of development. Other economists have been exploring agent-based modeling, which (as Kling says) is probably a good way to identify the existence (though not necessarily the exact nature) of complex PSST-type phenomena.
But for a moment, I want to step back and think about the policy implications of a PSST theory of the economy. As Kling points out, PSST weakens the typical rationale for countercyclical fiscal and monetary policy (though it does not necessarily mean that those policies are ineffective). But it greatly strengthens the rationale for a very different kind of government policy - one which is commonly derided by most modern macroeconomists. I am talking about industrial policy.
In a typical microeconomic model, the market clears, because price adjusts to balance supply and demand. In a PSST world, this does not happen. The pattern of specialization and trade will not always be disturbed by small changes in prices, because the global pattern itself represents a stable equilibrium (i.e., is "sustainable"). How many computers I buy and sell will depend not only on the price of computers, my desire for computers, and my cost of producing computers; it will depend on the prices, desirabilities, and costs of a bunch of other goods throughout the whole economy. The economy will be riddled with network externalities, and the resultant weakening of the price mechanism means that any market may or may not tend toward efficiency on any given time scale. In other words, in a PSST world, there is no invisible hand.
This opens the door for a hugely expanded role for government (or other large, centralized actors) in the macroeconomy. If global patterns matter as much as local prices, then an actor large enough to perceive and affect the overall pattern might be capable of nudging the economy out of a bad equilibrium and into a better one. Dani Rodrik has been saying this for a long time in connection with newly developing economies, but the same may be true in rich countries when faced with disruptive technological change or globalization.
Is it possible that fiscal policy is really just industrial policy? Could it be that World War 2 ended the Depression not because it represented a sufficiently large Keynesian stimulus, but because it deliberately created new industries and new technologies that formed the basis of a new sustainable pattern of specialization and trade? After all, the modern U.S., German, and Japanese automobile and aircraft industries look suspiciously like the same firms that supplied their countries' war efforts seventy years ago. And Annalee Saxenian will tell you that Silicon Valley got its start from World War 2 weapons research and shipbuilding.
Anyway, this is something to think about. If you are brave enough to venture out of the comfortable, familiar world of aggregate production functions into the vast and unexplored wilderness of PSST, more power to you. Just don't be surprised if what you find is weirder than anything Adam Smith ever dreamed.


Update: Arnold Kling and Tyler Cowen are generally on board with my characterization, but are skeptical of government's ability to conduct effective industrial policy. Note that I am not claiming that government is good at industrial policy, only that PSST implies that industrial policy would be the most effective type of government intervention. Meanwhile, Brad DeLong thinks that this PSST idea is basically bunk, and that the macreconomy is not an irreducibly complex system. And Karl Smith speculates that excess financial-industry profits might be due to finance's ability to perceive and affect the big patterns.
Author: Noah Smith Posted at 5:58 PM