The sum of all right-wing assumptions 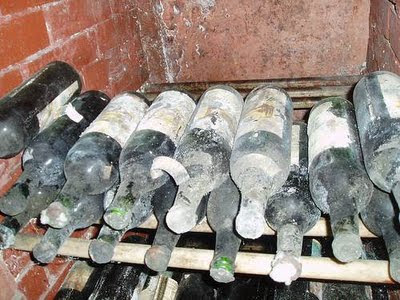 Dang you, Matt Yglesias! If I don’t get my dissertation done on time, it’s all your fault!
I am referring to this post, in which Matt points out a paper by John Cochrane of the University of Chicago:

Here’s a slice from the conclusion of his piece:


Will we get inﬂation? The scenario leading to inﬂation starts with poor growth, possibly reinforced by larger government distortions, higher tax rates, and policy uncertainty. Lower growth is the single most important negative inﬂuence on the Federal budget. Then, the government may have to make good on its many credit guarantees. A wave of sovereign (Greece), semi-sovereign (California) and private (pension funds, mortgages) bailouts may pave the way. A failure to resolve entitlement programs that everyone sees lead to unsustainable deﬁcits will not help.

When investors see that path coming, they will quite suddenly try to sell government debt and dollar-denominated debt. We will see a rise in interest rates, reﬂecting expected inﬂation and a higher risk premium for U.S. government debt. The higher risk premium will exacerbate the inﬂationary decline in demand for U.S. debt. A substantial inﬂation will follow—and likely a “stagﬂation” not inﬂation associated with a boom. The interest rate rise and inﬂation can come long before the worst of the deﬁcits and any monetization materialize. As with all forward-looking economics, no obvious piece of news will trigger these events. (emphasis Yglesias')

Basically, if Cochrane is right, then tax cuts actually represent fiscal austerity, and conservatives don’t have to worry about all those silly economists who say that you can’t cut the deficit without tax hikes. Matt drily notes that it’s pretty convenient that this…um…counteruintuitive conclusion just happens to dovetail perfectly with the policy proposals of Cochrane’s drinking buddy Paul Ryan. But Matt stops short of critiquing the paper’s methodology, basically daring me to do it:


I obviously don’t have the technical chops to wrangle with Cochrane’s model in detail.

Hence, Matt is entirely responsible for my failure to complete my dissertation.

Anyway, on to the paper…

This is just the statement that the value of government debt is equal to the government’s ability to pay back the debt by taxing people. The second equation is the “quantity theory of money”:

The first of these equations is pretty uncontroversial. For a critique of the quantity equation, see Matt Rognlie, Matt Rognlie, and Matt Rognlie, but having some kind of relation between money, output, and prices is pretty unavoidable in a macro model.
An analysis of the entire paper is, well, beyond the scope of this blog post. I think I’ll stick to analyzing the claim that Matt Yglesias talks about, i.e. the story that higher taxes can cause stagflation. But first a point. The fact that Cochrane reduces the macroeconomy to two more-or-less uncontroversial equations causes me to invoke Noah's Third Law of Article Reading:

If your model is a subset of the intersection of most existing models, either you didn't get any new results, or you need to check your assumptions.

In other words, don't expect to get Exciting New Results using only the Same Old Stuff. Is John Cochrane really going to show that higher taxes cause inflation using nothing but an intertemporal budget constraint and hoary old MV=PY?
Simplifying your model past the point of full determinacy doesn’t remove the need to make additional assumptions about economic relationships; it just makes those assumptions implicit rather than explicit. If you say that only these two equations matter, you’re saying that other things, like imperfect competition and price stickiness, don’t.

Cochrane acknowledges this at the beginning of the paper:


[These two equations] are the beginning, not the end of analysis, and I do not mean to imply otherwise. In particular, monetary models also include a description of dynamics, and price-stickiness or [an]other mechanism that…translates inflation into real output…Additional frictions [that generate] stimulative effects of tax or real debt-financed government spending, and additional financial frictions can easily be added to this style of analysis.

And again later on:


I am abstracting here from [frictions that] potentially have important effects on the analysis of fiscal stimulus…My goal is…not to deny other channels or try to have a last word on an 80 year old debate.

So Cochrane is being intellectually honest here. He’s admitting that he just left out all of the things that monetarists and Keynesians believe makes stimulus and quantitative easing effective. They “can easily be added,” but he doesn’t add them. So the conclusion that countercyclical policy doesn’t work is going to follow pretty naturally from the assumption that countercyclical policy doesn’t work.


The Sum of All Right-Wing Fears
Now let’s talk about the scenario that Matt Yglesias picked out. In this scenario, higher taxes – which we normally think of as deflationary – actually create inflation, while still stifling output. To reiterate, the scenario is:
Higher taxes ---> slower growth ---> higher structural deficits ---> higher inflation, capital flight ---> stagflation
As it turns out, this particular sequence of events relies on three assumptions:
Assumption 1: Higher taxes would actually increase deficits, i.e. we’re to the right of the Laffer peak.
Assumption 2: Increased deficits are structural and cannot be reversed.
Assumption 3: Bond investors will not believe that the U.S. will be able to reduce spending in the future, and will thus abandon U.S. Treasury bonds.
Normally, we think tax increases should raise revenue and help close deficits. Not so, say supply-siders; we’re to the right of the peak of the Laffer curve, and thus higher taxes will decrease revenue and increase deficits. Of course, static analyses all agree that the U.S. is well to the left of the Laffer peak, so we’re in no danger of this happening. Supply-siders are forced to assume that the dynamic effects of taxes on future growth are large. Cochrane does in fact assume this:


The top of the Laffer curve is where the elasticity is equal to zero, so higher tax rates raise no revenue. Many economists think the U.S. is comfortably below that point…Trabandt and Uhlig (2009) offer a detailed Laffer calculation with fixed productivity growth and no migration, yielding the result that the U.S. is substantially below the Laffer limit….

The present value of future tax revenues is what matters for the fiscal valuation equation, however...[so] small growth effects can have a big impact on the fiscal limit. Thus, if a rise in [taxes] from 30% to 35% only implies a 0.02 x 0.15 = 0.3% reduction in long-term growth, then we are at the fiscal limit already.

Does Cochrane really believe in this huge supply-side effect? It appears he does:

Here is the aforementioned Fig. 1: 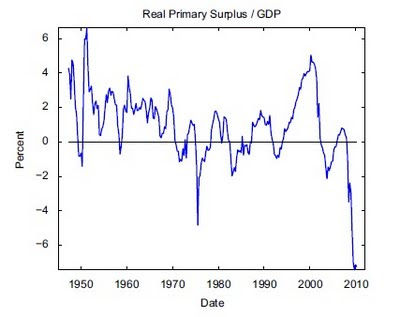 Do you see the “strong surpluses” that followed Reagan’s tax cuts? If so, maybe you should consider a job as a “technical analyst” on Wall Street…because all I see is a deficit, followed by a small surplus after Reagan partially reversed his tax cuts, followed by a very big surplus after the Clinton tax increases, followed by a deficit after the Bush tax cuts…
So, I conclude that Cochrane’s “dynamic Laffer curve” analysis is not supported by any evidence presented here (or any evidence of which I am aware).
Cochrane’s second assumption is that stimulus deficits are structural and permanent (i.e. a negative shock to the present value of all future budget surpluses). This just seems unrealistic to me; in the real world, spending from, say, the ARRA has already pretty much finished. In fact, the assumption seems to be basically political in nature. Cochrane mentions (in the quote above) that Reagan-era supply-siders advocated “larger short-term deficits”…by commending this policy, Cochrane appears to assume that deficit spending by Republican administrations can be reversed, but that deficit spending by Democrats never will.
Finally, we have the notion that these permanently higher deficits will lead to capital flight – the so-called “attack of the bond vigilantes.” This assumption is embodied in a posited decrease in the stochastic discount factor, i.e. a rise in expected interest rates. But Cochrane’s model is forward-looking; as he explicitly states (page 3), this should make long-term interest-rates spike as soon as (or actually well before) the higher deficits are announced. As many, many people have pointed out, nothing like this has yet happened so far to the U.S. economy, despite the explosion in deficits described by Cochrane. If a “fiscal inflation” is in our future, either it doesn’t follow Cochrane’s implied model of expectations, or it is, as yet, completely hypothetical to even the most far-sighted observer.
So to make a long story short, the “Sum of All Right-Wing Fears” scenario is really just a “Sum of All Standard Right-Wing Assumptions.” Tax increases decrease revenue. Democrats are addicted to deficits. Bond vigilantes are ready to abandon U.S. Treasuries.
It seems to me that all three of these ideas have been rebutted (or at least candidly discussed) a million bazillion times in the past. But by cloaking them in math and burying them amid a bunch of reformulations of present-value equations and econ-specific jargon, John Cochrane was able to pour old wine ($370/bottle wine, no less) into a new glass, and keep smart non-econ people from seeing that that was what he was doing.
Well, for a little while, anyway.
At any rate, I invite everyone to go through and read the rest of Cochrane's paper and find more errors or good points that it makes. In particular, I didn't have the time to look at his claim that monetary policy is ineffectual. I’m sure there are a bunch more assumptions about things like causality, stability, expectations, unmodeled behavior of aggregates, etc. that I didn’t have time to go through and identify. After all, I’ve got a dissertation to write…or something…
Author: Noah Smith Posted at 9:30 AM