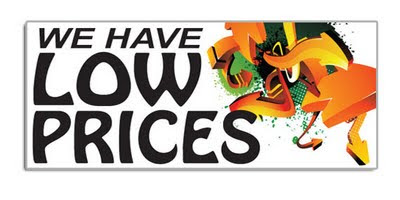 Tyler Cowen links to an interesting post about the deflationary impact of the internet. This is interesting not just because it illustrates how technological change impacts the economy, but because it tells us something about recessions. Namely, it tells us that our current recession - like all of the other ones in recent memory - was caused by deficiencies in demand, not in supply.
Does output falter because people don't want to buy as much stuff, or because we become unable to make as much stuff as we used to? This is a debate that has gripped the macroeconomics profession for many decades. Which is kind of surprising to me, because it is so obvious that demand shocks are the culprit.

Draw a supply-demand curve for the whole economy, and it looks like this:

A negative shock to supply - for example, a resource shortage or an increase in harmful government regulation or a "negative technology shock" - will shift either the long-run aggregate supply curve or the short-run aggregate supply curve (or both) to the left. The new equilibrium will have lower output and higher prices. However, a negative shock to demand - for example, an increase in the demand for money - will shift the aggregate demand curve to the left; the new equilibrium will have lower output and lower prices.
In all of the recent recessions, faltering output has been accompanied by lower, or even negative, inflation. This means that demand shocks must have been the culprit. If "uncertainty about government policy" were really the cause of the recession, as many conservatives claim, then we would have seen prices rise - as companies grew less willing to make the stuff that people wanted, stuff would become more scarce, and people would bid up the prices (dipping into their savings to do so). I.e, we would have seen inflation. But we didn't see inflation.
So it seems that the stories that conservatives tell about the recession - "policy uncertainty," "recalculation," or even a "negative shock to financial technology" - are not true. The stories that everyone else tells about the recession - "a flight to quality," "increased demand for safe assets," etc. - look much more like what basic introductory macroeconomics would predict.
Of course, conservatives don't necessarily believe in the graph I included above. They may dismiss the idea of a downward-sloping AD curve (and an upward-sloping SRAS curve), and imagine that the AD curve is just a flat line (or maybe even an upward-sloping line?). In that world, supply changes, and only supply changes, determine the level of output, and demand changes, and only demand changes, determine the price level.
That's where the blog post that Cowen linked to comes in. In a world in which deflationary recessions (such as our current one) are caused by negative supply shocks, then positive supply shocks should also leave prices unchanged. In particular, an improvement in technology would cause us to produce more stuff at the same price, rather than more stuff at lower prices. However, if the internet is deflationary, it shows that positive supply shocks do, in fact, decrease prices. The AD curve slopes down, as it should.
The basic point here is about the dangers of doing what Larry Summers calls "price-free analysis". If you ignore prices, it is possible to convince yourself that recessions are caused by technology getting worse, or by people taking a spontaneous vacation, or by Barack Obama being a scary socialist. If you pay attention to prices - as all economists should - it becomes harder to believe in these things.

So the question is: Do conservative-leaning economists push these stories because they believe that we live in a world that is vastly more complicated than anything that can be described in Econ 102? Or is it just because they choose to ignore Econ 102 completely?
Author: Noah Smith Posted at 5:33 AM