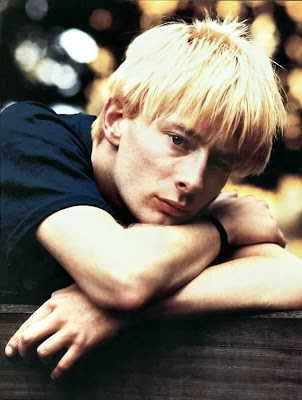 This weekend, at an INET conference, Mike Konczal of Rortybomb made the excellent point that the econ blogosphere is probably adding more new policy ideas to the public discourse right now than academia itself. He identified NGDP targeting as the most important and dramatic example.

And boy was he right! NGDP frenzy has reached truly astonishing levels. I have my doubts that the Fed will actually adopt an NGDP target, but there is no denying that the blogosphere and much of the popular press has fallen for this idea like girls at my college fell for Thom Yorke back in 1999 (no I'm not bitter, why do you ask?). These days Scott Sumner says "NGDP" like Herman Cain says "9-9-9." Now, I am all for looser monetary policy, whether it comes in the form of an NGDP target or not. But NGDP has reached the point where, like Radiohead, its cult status is actually starting to annoy me.
Take, for example, this post from Matt Yglesias (an extremely sharp dude) on how NGDP is the "actual thing":

[I]t seems natural to many people to take [real GDP and inflation] as “given” and understanding NGDP (= GDP + inflation) as somehow constructed and exotic. But actually NGDP is, relatively speaking, the simple quantity here. It measures total spending in the economy. You count everything, add it all up, and you’ve got your NGDP...Social construction enters the picture when we try to move from this nominal quantity to the allegedly “real” one...

[W]e have all these different measures of inflation...[but it's]not directly measurable the way NGDP [is]...Nor is it particularly clear what, in principle, “real” GDP is measuring. Think up all the classic critiques of GDP as a measure of human welfare...When you shift from GDP to “real” GDP, though, you’re not measuring the total quantity of spending anymore.

I just don't think this is the right way of seeing it.
Matt's main point is that because inflation is mismeasured, real GDP ("RGDP") is also mismeasured. Sure, that's true (though of course NGDP itself is not measured with anything remotely approaching certainty). But that doesn't mean NGDP is "better" than RGDP. An accurately measured number is not necessarily more useful than a less accurately measured number, if the latter is something we care about and the former is something we really don't.
In terms of economic well-being, we do not care about NGDP. Or at least, we shouldn't. To see this, take the example of Zimbabwe. In 2007, Zimbabwe's NGDP grew at a rate of over 60,000%! No, that is not a typo. The "total quantity of spending" in Zimbabwe at the end of 2007 was more than 60,000 times what it was at the beginning of 2007. For real.
Anyone still think NGDP is the "actual thing"?
The problem with NGDP is that you can't eat it. It really is just numbers on a page. Normally, it is a reasonable approximation to a measurement of stuff we can eat. But when someone starts playing around with the numbers on the page, as in Zimbabwe's hyperinflation in 2007, NGDP stops being any kind of measure of stuff we can eat.
In other words, NGDP has a potentially large source of mismeasurement in it, and that mismeasurement is inflation itself. When we try to take NGDP and recover some kind of measurement of how much eat-able stuff our economy produces (i.e., RGDP), we have to try to account for the mismeasurement represented by inflation. And of course we end up mismeasuring inflation, as Matt points out, but all that means is that we are mismeasuring our mismeasurement of RGDP. Inflation is still the first-order mismeasurement.

Actually, the world abounds with cases like this. It's easy to measure how many hours a worker sits in front of a desk, but hard to measure how much useful work (s)he actually accomplishes in that time. But it's the latter we care about, not the former.
Now, I am not saying that the U.S. is in danger of hyperinflation. It's not. Nor am I saying that RGDP is a perfect or even a great measure of human happiness. It's not. My point is that NGDP is not supposed to be a measure of how well the economy is doing. People who support NGDP targeting, like Scott Sumner, support it because they believe that NGDP is a good indicator of how much money we should print. Not because they think that NGDP is intrinsically good.
NGDP may be less indirectly measured, but RGDP is still the "actual thing."
Like I said, I support printing money and buying stuff. And I think OK Computer was a rockin' album (and Kid A and The Bends were good too). But thinking of everything in terms of NGDP does not make all of macroeconomics suddenly simple and comprehensible and predictable. And Radiohead didn't save rock. Sorry, fans, but there it is.


My point is that NGDP is not supposed to be a measure of how well the economy is doing. People who support NGDP targeting, like Scott Sumner, support it because they believe that NGDP is a good indicator of how much money we should print.

In Sumner's "rebuttal," he writes:

Not to be excessively whiny, but is that not exactly what I just said???

So exactly what "key points" am I missing? And how on Earth am I "criticizing NGDP"? My gosh, people. NGDP is an economic indicator, not a fair damsel in need of gallant knights to defend her maiden virtue. Settle down!
Author: Noah Smith Posted at 6:18 PM