We need a Peter Thiel conservatism 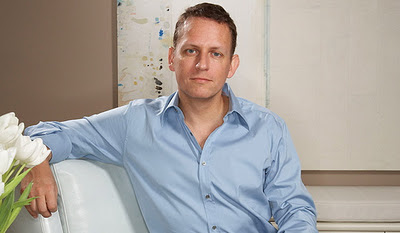 Peter Thiel has some weird ideas. He thinks there was a "collapse of art and literature after 1945." He wants to live on a floating libertarian utopia made from trash, like the guy in Snow Crash. He'll pay you $100,000 to quit college. But he also has some very good ideas about where to take the conservative movement.

As I see it, modern American conservatism is suffering from a severe deficit of ideas. Back in 1980, the year of the Reagan revolution, the movement was brimming with initiatives. Cut income taxes. Deregulate industries. Get tough on inflation. Get tough on crime. Spend a bunch on the military to scare the Soviet Union. Bust unions. Get tough on drugs. Teach kids not to have sex before marriage. Put Christianity back in public schools.

Fast forward three decades, and that brand of conservatism has lost its raison d'etre. Some of its ideas succeeded, some failed, most had mixed results, but almost none of them has anywhere left to go. Tax rates are already unsustainably low. Stagflation has given way to a liquidity trap. 2.3 million of our people are behind bars. Private-sector unions are a memory, as is the USSR.

So when you ask conservatives for ideas these days, they can make only three suggestions. Cut income taxes EVEN MOAR. "Drill here drill now" (i.e. shut our eyes really tight and wish we were Saudi Arabia). And the third idea... ... ...the EPA? No, that isn't it...oops.

Which is where Peter Thiel comes in. In a brilliant (and only occasionally kooky) article in the National Review, Thiel claims that we are experiencing a long-term slowdown in technological progress (Tyler Cowen's "Great Stagnation"). Without a steady upward march of new inventions and higher productivity, he believes, the world will revert to a zero-sum game:


The technology slowdown threatens not just our financial markets, but the entire modern political order, which is predicated on easy and relentless growth. The give-and-take of Western democracies depends on the idea that we can craft political solutions that enable most people to win most of the time. But in a world without growth, we can expect a loser for every winner. Many will suspect that the winners are involved in some sort of racket, so we can expect an increasingly nasty edge to our politics. We may be witnessing the beginnings of such a zero-sum system in politics in the U.S. and Western Europe[.]

This rings true to me. The middle-class society that liberals have struggled to create seems liable to degenerate into class warfare when the pie stops growing (note that in the U.S. it has been the rich who have initiated and won this class warfare in recent times).

Thiel also recognizes that tax cuts, the conservative movement's magic cure-all-that-ails-ya, are an unsustainable short-term palliative rather than a long-term efficiency booster:


A mischievous person might even ask whether “supply-side economics” really was just a sort of code word for “Keynesianism.” For now it suffices to acknowledge that lower marginal tax rates might not happen and would not substitute for the much-needed construction of hundreds of new nuclear reactors.

And then, at the end of his rant, Thiel slips in the paragraph that has the potential to change American conservatism:


Let us end with the related question of what can now be done. Most narrowly, can our government restart the stalled innovation engine?

The state can successfully push science; there is no sense denying it. The Manhattan Project and the Apollo program remind us of this possibility. Free markets may not fund as much basic research as needed. On the day after Hiroshima, the New York Times could with some reason pontificate about the superiority of centralized planning in matters scientific: “End result: An invention [the nuclear bomb] was given to the world in three years which it would have taken perhaps half a century to develop if we had to rely on prima donna research scientists who work alone.”...

Today a letter from Einstein would get lost in the White House mail room, and the Manhattan Project would not even get started; it certainly could never be completed in three years. (emphasis mine)

Peter Thiel recognizes and admits what doctrinaire conservatives have been loath to admit: government is not always and everywhere the problem. Sometimes, when externalities and public goods exist, government is the solution.

Conservatives, wedded to the drown-government-in-a-bathtub approach that worked so well for them in the 80s, have since been forced into taking the untenable, indefensible, goonball-"libertarian" position that public goods don't actually exist - that the unfettered market will provide plenty of basic research, infrastructure, etc. But regulation has been slashed, non-entitlement spending has been slashed, tax rates have been slashed, and essential government functions have been privatized...and, if Thiel and Cowen are right, innovation and progress have still slowed down. The Grover Norquist dog is no longer hunting.

What America needs is a conservative movement that does not simply replay yesterday's greatest hits. In the upcoming decades, one of our most pressing priorities (as Thiel recognizes in that article and elsewhere) is going to be finding an energy source to replace cheap oil and coal. This monumental task may not be (probably will not be) accomplished efficiently without massive government spending on basic research and new infrastructure. If conservatives, terrified of deviating even slightly from the Grover Norquist canon, stand in the way of this research, then either liberals will own the future, China will save us, or - more likely - our country will simply settle into a long, grumpy decline.

Moving from a Norquist conservatism to a Thiel conservatism does not mean that conservatives must abandon all their principles. They can call for shifting spending from health care to research and infrastructure, instead of raising the money via taxes. They can call for greater deregulation of biomedical research (another critical area of research). And in no way does acknowledging the important role of government in the economy force conservatives to abandon their cultural principles - hard work, sexual abstinence, Christianity, pre-1945 art, or whatever. In fact, if conservatives feel the need, as Thiel does, to couch their substantive shift in a flurry of hippie-bashing and sneering at "political correctness," well, be my guest, guys! We hippies are big boys and girls, we can take it.

But the idea that "government is the problem" is well past its sell-by date. Peter Thiel recognizes this. Let's hope the rest of the conservative movement catches on.

Update: In general, though, Peter Thiel is a nut.
Author: Noah Smith Posted at 3:47 PM