Filling a hole or priming the pump? 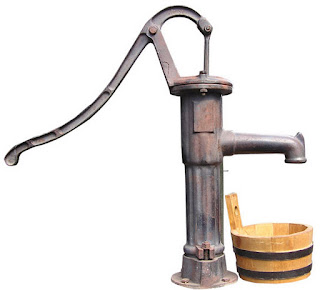 Who knew that neoclassical economists had something perspicacious to add to the stimulus debate? Steve Williamson sends me to this AEA talk by Jim Bullard of the St. Louis Fed. The presentation is mostly a rebuttal of the common liquidity-trap arguments for stimulus, but at the end, there was this one really interesting slide:


As Bullard states, the type of coordination failure that some Keynesians appear to have in mind - self-fulfilling beliefs about the future driven by fiscal policy - has not really been formally studied.

Verrrrrrry interesting. Bullard is saying "All you Keynesians are bending over backward trying to make stimulus all about countering a shock to Aggregate Demand, when actually you have a mental model of an economy riddled with coordination failures and multiple equilibria, where stimulus is all about expectations."

To me it seems obvious that a recession is a coordination failure. There are all these unused workers sitting around wishing they had jobs, and all this capital sitting around not being used! Even if you are believe a "recalculation" story, in which recessions are the sluggish response of a complex system to a structural shock, there is no guarantee that the adjustment proceeds at the fastest possible rate. Basically, unused capacity means we are not making as much stuff as we could be.

Now, the commonly used Keynesian models do involve some kind of coordination failure. In the classic Keynesian Cross model, buyers and sellers fail to coordinate their plans, resulting in an inefficient buildup of inventories. In modern New Keynesian models, sellers (including workers) fail to coordinate their price changes, resulting in too-high wages and unemployment. In both of these models, fiscal stimulus works - if it works - by "filling the hole" in aggregate demand.

But the thing is, both of these models are short-term models. The Keynesian Cross offers only a very short window for stimulus to work, since inventories typically get run down in a few months. In New Keynesian models, prices adjust over a period of perhaps a couple years. If Congress doesn't "fill the hole" in AD, the hole will fill itself. That is because both of these models are single-equilibrium models - for a given fiscal policy, there is one level of output and prices to which the economy must move.

In a world with multiple equilibria, however, there is no such certainty. In a world of multiple equilibria, different initial conditions can have devastating and persistent effects on the economy. That is a world of lost decades, debt overhangs, self-fulfilling pessimism, and "sunspots." In that world, fiscal policy may not be important only in the short term, but in the medium or even long term. That is scary, given how uncertain and slow and inefficient the political process can be. But it is also optimistic in a way, since a relatively small stimulus might be able to nudge the economy from a bad equilibrium to a good one, thus "priming the pump" rather than "filling the hole".

Bullard and Williamson say that this is the type of model that modern supporters of fiscal stimulus really have in mind. I don't know to what degree that is true. It certainly is true that Keynesians and others have spent some time and effort trying to construct multiple-equilibrium theories to explain why fiscal policy seems to make a difference. And it certainly is true that the often-used metaphor of "priming the pump" invokes a multiple-equilibrium situation. For my part, I find it much easier to believe in a world of multiple equilibria, for reasons both theoretical and anecdotal. I even have some conjectures about what kind of equilibria those might be, though that is the subject for another post.

So should we be focusing on building multiple-equilibrium models in order to evaluate fiscal policy? In practice, it's hellishly hard to make those models both tractable and predictive (especially when forced to work in a clunky DSGE framework!). That is probably why stimulus advocates have used New Keynesian models with liquidity traps to make their case in intellectual circles. But progress is being made on the multiple-equilibrium front - for an example, see this recent paper by Angeletos and La'O (about which I also intend to blog more).(Update: Whoops! Wrong paper...thanks to Steve Williamson in the comments for pointing that out!). For some examples, see various work by Roger Farmer. I say that this is a very important direction for research.

It also means that we shouldn't assume that fiscal policy questions will simply become moot as time goes on. Depending on the type of equilibria the economy faces, stimulus may not only be a policy for the short term. It's interesting that neoclassical economists are the ones bringing attention to this idea.

Update: In the comments, Roger Farmer adds so much information about his work on multiple-equilibrium coordination-failure models that his comment is substantially more interesting than my entire blog post. Hence, I will post the comment here in its entirety:


Thanks for drawing attention to co-ordination failure models Noah. Let me clarify a couple of points about how my views differ from those of the new-Keynesians.

First; as you point out in your post, I have been working on a new generation of co-ordination failure models in which a high unemployment equilibrium can persist forever. The clearest exposition of these models is here

Second; Steve is correct that I am reluctant to support large fiscal stimulus programs. I have written two papers on the role of fiscal stimulus in second-generation co-ordination failure models, one in an overlapping generations model here

and a second paper joint with Dmitry Plotnikov, in a representative agent framework here

In both of these models, a fiscal stimulus will decrease unemployment. But if confidence remains low, the fix will be temporary. In both models, the fiscal stimulus reduces welfare because it crowds out private consumption.

Recall that in Keynesian models, increased government expenditure is supposed to "crowd in" private consumption. That is the whole idea behind the consumption-income multiplier. My reading of the evidence is that "crowding in" (an increase in consumption caused by an increase in government purchases) is not supported by the data.

If fiscal stimulus is to have a permanent effect in the models I work with, it must work through a non-economic mechanism. One channel would be a temporary boost to employment that restores the confidence of the private sector by influencing market psychology: A confidence booster. That is a possibility. But I think it is implausible that increased government expenditure will have that effect.

My reading of the evidence is that consumption depends primarily on wealth rather than income. That was the lesson of work by Ando and Modigliani, Modigliani, and Friedman in the 1950s. It is for that reason that I support interventions in the asset markets that try to jump-start the economy and reduce unemployment by boosting private wealth. That, in my view, is what quantitative easing has done.