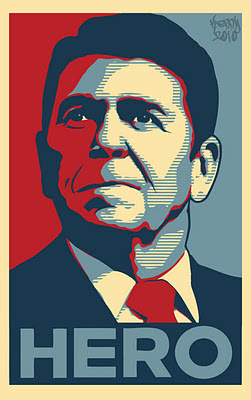 
We are not really recovering from the recession, at least not compared to the period after previous big recessions such as the early 1980s...The reason is pretty clear. In the Wall Street Journal piece I refer to and quote from a memo written by President Reagan’s economic adviser George Shultz and others after the 1980 election. It laid out the long run economic strategy they recommended and which Reagan followed. Contrast that with the memo Larry Summers sent to President-elect Obama after the 2008 election, which is making the internet rounds. It laid out the short-run Keynesian policy Summers recommended and which Obama has followed. The big policy differences largely explain the big economic performance differences. (emphasis mine)

And what are those big policy differences? In the WSJ article, Taylor spends a lot of time making a general case for "economic freedom," but names only one concrete policy difference between Reagan and Obama: Reagan enacted permanent tax cuts, while Obama enacted temporary tax rebates (in the ARRA). Taylor argues that Reagan's permanent tax cuts represent policy based on predictability and stability, while Obama's policies represent short-term, unreliable interventions.

This is a very standard intellectual-Republican narrative of economic history. Which, again, does not mean it is wrong. But I do see some big problems with Taylor's analysis.

In other words, if the 1981-2 recession was fundamentally the same kind of event as the 2008-9 recession, then Taylor is concluding that Obama's temporary tax cuts (or other actions, such as saying bad things about "business") substantially prolonged the current slump. I suppose that is possible - it's a claim that many Republicans have repeated - but it seems like a difficult case to make. A lot harder of a case, in fact, than simply saying "Reagan's policies were better than Obama's."


Problem 2: There are other historical examples of deep recessions besides the one in the early 80s. When we compare policies and results between now and the Great Depression, for example, especially in Britain, we are tempted to reach conclusions very different from Taylor's. I'll outsource this part of the argument to Brad DeLong:


This many months after the start of the Great Depression, the British economy was rapidly converging back to its pre-depression level of production under Chancellor of the Exchequer Neville Chamberlain's policy of using stimulative policies to restore the price level to its pre-Great Depression trajectory.

By contrast, the Cameron-Osborne policies of expansion-through-austerity have produced a flatline for real GDP, and the odds are high that British real GDP is headed down again.

So if you want to ascribe economic outcomes to broad differences in economic policy, why only look at the Reagan years? Why not look at the Depression? And why look only at the U.S. instead of at other countries as well?


Problem 3: The 2008-9 recession does not seem very comparable to the 1981-2 recession. For one thing, the early 80s recession immediately followed (and, most believe, was precipitated by) a huge hike in interest rates by the Federal Reserve (which was trying to beat inflation). That meant that as soon as rates were allowed to fall, the force that had spiked U.S. GDP growth would be removed. In contrast, the 2008-9 recession occurred during a period of historically low interest rates, which were dropped to zero shortly after the recession began. This left the Fed without its usual method of boosting GDP growth. Even more importantly, the difference also indicates that the "shocks" that caused the two recessions were fundamentally different - a policy shock in the case of the early 80s recession, but some other kind of shock in the case of the 2008-9 recession.


In other words, I think this simple standard Republican narrative does not fit the facts. It is tempting, especially for politically conservative economists, to conclude that Reagan's tax cuts made everything about the U.S. economy awesome, and that something done or said by the left-leaning Obama made everything go wrong. But that conclusion just doesn't square with the evidence that we see when we look out the window. I think a more complex narrative is needed.

Update: Paul Krugman points out that Reagan raised taxes in 1982. Which means that A) Reagan's 1981 tax cuts were not quite as predictable, stable, and long-term as Taylor claims, and B) according to Taylor, this Reagan policy should have hindered the 1983 recovery.
Author: Noah Smith Posted at 2:55 AM