Welcome, economist, to the desert of the real 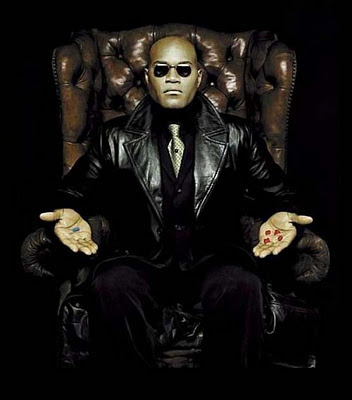 One more post before I stop my unprecedented blogging frenzy. I'll make it a philosophy-of-science one.

Back in September, Frances Woolley of Worthwhile Canadian Initiative wrote one of the most telling posts I've ever read on the culture of the econ profession:

Economists like to begin with a general model, work out its implications, and then go to the data to test the theory...facts in and of themselves are uninteresting unless they illuminate economists' view of the world, and can be explained in economic language.

Psychologists begin by observing people's behaviour, looking for generalizable patterns...Yes, psychologists have conceptual explanatory frameworks, such as prospect theory, to explain such phenomena,but these theories are not the elegant mathematical creations favoured by economists...

It's a dilemma for behavioural economists. Yes, it's possible to go into the lab or into the field, run experiments, and see how people actually behave...But what do you do next?...

[I]f people's demands are just a product of framing, salience, [etc.], how can we...make any inferences about the efficiency of different [policies]?

The economic approach to policy analysis is deductive - economists begin with assumptions about consumers' and firms' preferences and behaviour...Perhaps there is some way of including behavioural considerations into that framework...But that doesn't feel right to me - if a consumer's marginal benefit from consumption is something other than what is revealed by his or her demand I could just make up anything as a marginal benefit curve, and economics would become a completely ad hoc exercise.

Dabbling in economic psychology or behavioural economics is a little like taking the red pill -  you go down the rabbit hole, and wake up realizing that the entire world is an illusion.

How can economists evaluate policy if they can't use people's preferences as revealed by their choices? We still need some way of figuring out which policies help people and which policies hurt people...

Once you fall down the rabbit hole, you just have to keep on going. If people's choices are not a reliable guide to their well-being, you have to turn to something else. Ask people how happy they are and measure well-being in terms of happiness. Evaluate health care spending by looking at objective measures of health, such as mortality, morbidity, or survival rates. Chuck out the entire elegant theoretical framework of welfare economics.

That idea has me, for one, reaching for the blue pill - after all, people aren't stupid, so standard economic analysis isn't a bad approximation of the real world, is it?

But I can't find one. I can't get all of that behavioural stuff outside of my head.

This post is an absolutely wonderful window into the world of the economist's mind. I'll talk about what it means for the profession in a moment, but first let me do the philosophy-of-science bit.

It doesn't really matter whether you start with deduction or induction. If you start with a theory that you just made up because it sounded reasonable, that's fine! You just have to go test it before you believe it. If you start with some observations, that's fine too...you just have to try to make a theory to make sense of them, or your observations will not allow you to make inferences from what you observed. And making inferences - i.e., increasing humanity's power to control our Universe - is what science is really all about.

If your science is only "deductive" or only "inductive," what it really means is that you are stuck. You can't get to the next step. Either you don't have theories that match the data, or you have observations you can't explain. That's fine. Getting stuck happens all the time; you just have to recognize it and keep trying, and then maybe someday you'll get unstuck, and that's called a scientific revolution.

What you don't want to do is accept being stuck. There is a temptation for a scientist to try to convince herself that her field doesn't need one of the two steps - to say "My field is an inductive science, we don't need theories," or "My field is a deductive science, we don't need to test our theories." If a field as a whole accepts one of these seductive errors, it can stagnate for long periods of time. Some people argue that psychology is stagnating by ignoring the need for theory. Others argue that particle physics is stagnating by ignoring the need to test string theory.

At least since Kahneman started doing economics experiments back in the 70s, people have been arguing that economics has stagnated by not paying enough attention to the real world - by valuing theories that seem intuitive, or tell a good story, so highly that we refuse to admit any evidence to the contrary. Behavioral economics is a response to that criticism, as is the increased focus on natural experiments.

This has been a good development. But the battle for more attention to evidence is still an uphill one, as Woolley's post demonstrates. The profession as a whole is very enamored with the elegance of certain foundational ideas - revealed preference, Von Neumann-Morganstern expected utility, the First and Second Welfare Theorems, Arrow-Debreu equilibrium, etc. And for a long time, economists were not held to the same standards as natural scientists - we didn't have to prove our theories. Our field grew out of a literary tradition, not an engineering tradition. Smith and Hume were brilliant people, but folks in those days didn't read their books and go "Oh yeah? Well, prove it!"

And so we got spoiled. With no one forcing us to move on from deduction to induction, we were able to shy away from the cold, bitter snowstorm of reality, slam our doors, and simply choose to keep believing in things that sounded good to us. You can see the remnant of this longing in Woolley's desire to "reach for the blue pill" - instinctively, she doesn't want behavioral results to be right, she feels a primal urge to huddle close to the warm fire of classical theory.

But in the end, she can't. As our society became more scientifically oriented, the literary tradition in economics died out - a process that was aided, ironically, by the mathematics that made the foundational results of classical theory so elegant and beautiful. When you make quantitative arguments, eventually people are going to ask where they can find those quantities in the real world. The door to reality has been wedged open, and snow is pouring in. That's why Woolley can't bring herself to "take the blue pill" - for better or worse, we're scientists now, not philosophers.

The only hope for our science - for any science - is to keep alternating between deduction and induction, no matter how long each switch may take. For microeconomics, the challenge is to get a more complete picture of both human behavior and the effects of markets, and to craft coherent theories that make sense of that picture. This effort precedes apace. (As just one example, check out this paper by Dan Benjamin, Matt Rabin, and Collin Raymond, which integrates a bunch of behavioral anomalies into one interesting theory.)

For macro, though, I fear that many of us are still telling ourselves that deduction is all we need - that we should keep putting "theory ahead of measurement," that we should continue to believe in theories after the data has rejected them. That needs to stop, or we'll never get anywhere. I like to think that the awarding of last year's Nobel prizes to two macro empiricists - one who created an alternative to DSGE, and one who rejected a ton of rational-expectations models - is a sign that other people have realized this as well. But it's going to be an even more uphill battle than in micro. Macro has much worse data, after all. It's almost certain that, unlike in micro - where additions like Prospect Theory often represent only moderate tweaks to existing frameworks - most or all of our existing macro theories will turn out to be not even close to right. But we have no choice but to reject those models, or we will eventually fade into noodling irrelevance.

Welcome, economist, to the desert of the real.

(It's, you know, a snowy desert. Like Antarctica.)
Author: Noah Smith Posted at 2:28 PM