In which Steve Landsburg makes me lose my lunch 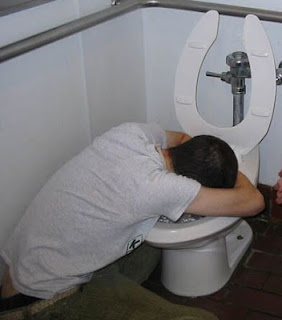 Steve Landsburg has a post defending Rush Limbaugh's comments about Sandra Fluke. Landsburg claims that Rush was right to mock Fluke, and was right to request that Fluke send him a tape of herself having sex.

This post really made me want to vomit. It is morally repugnant and disgusting in the extreme. It deserves strong condemnation, and possibly a hurled water balloon filled with the unsavory excretions of an African hyena. It is the most sickening thing I have read in the econ blogosphere, bar none.
But as economists, we are supposed to be dispassionate. We are supposed to overcome our biases and dwell in a realm of pure reason. And so I will rebut Landsburg's post not based on its severe moral failings, but on its logical shortcomings, of which there are many. For the post is not merely offensive, it is poorly thought out.
First, Landsburg mocks Sandra Fluke:

[W]hile Ms. Fluke herself deserves the same basic respect we owe to any human being, her position — which is what’s at issue here — deserves none whatseover. It deserves only to be ridiculed, mocked and jeered. To treat it with respect would be a travesty. I expect there are respectable arguments for subsidizing contraception (though I am skeptical that there are arguments sufficiently respectable to win me over), but Ms. Fluke made no such argument. All she said, in effect, was that she and others want contraception and they don’t want to pay for it...

But whether or not he chose the right word, what I just don’t get is why the pro-respect crowd is aiming all its fire at Rush. Which is more disrespectful — his harsh language or Sandra Fluke’s attempt to pick your pocket? That seems like a pretty clear call to me.

The notion that Sandra Fluke deserves to be ridiculed, mocked, and jeered is, of course, a value judgment. But on what basis is this value judgment made? Apparently, Fluke deserves to be jeered and ridiculed because she is requesting an in-kind transfer payment from the government. Do all people who request in-kind transfer payments from the government deserve to be "ridiculed, mocked, and jeered"? Are people who accept mortgage interest tax deductions "extortionists"? What about old people on Medicare? Or poor people on food stamps? Or college students on Pell Grants? Landsburg's justification for mocking Fluke can just as easily be applied to nearly ever human being in the United States - or, at least, any of us who wouldn't voluntarily give up our in-kind government benefits. By Landsburg's definition, America is made up of nothing but extortonists.

(Of course, I didn't even address the question of how Sandra Fluke intends to compel U.S. taxpayers to pay for her contraception; in my book, "extortion" requires some sort of actual force or credible threat of force.)
Now here comes the part of Landsburg's post that is not only the most vile, but the most logically nonsensical:

To his credit, Rush stepped in to provide the requisite mockery. To his far greater credit, he did so with a spot-on analogy: If I can reasonably be required to pay for someone else’s sex life (absent any argument about externalities or other market failures), then I can reasonably demand to share in the benefits. His dense and humorless critics notwithstanding, I am 99% sure that Rush doesn’t actually advocate mandatory on-line sex videos. What he advocates is logical consistency and an appreciation for ethical symmetry. So do I. Color me jealous for not having thought of this analogy myself.

Again, let's analyze this dispassionately. Landsburg claims that if Rush's taxes pay for Sandra Fluke's contraception, then Rush is entitled to some direct in-kind benefit from Sandra Fluke's sex life (for example, a sex tape to which Rush can...um...you know). This claim, besides being retch-inducing, has two clear logical flaws.
First, from an economic efficiency standpoint, in-kind benefits are inferior to direct cash payments, as Ed Glaeser will tell you. Instead of giving Rush a sex tape, it would be more efficient to simply hand Rush some cash (i.e. reimburse him the amount he paid for the birth control) and let him buy whatever he wants with it.
Second, by Landsburg's own admission, Sandra Fluke will be having sex whether or not Rush pays for it:

Ms. Fluke is not in fact demanding to be paid for sex. (Not that there’s anything wrong with that.) She will, as I understand it, be having sex whether she gets paid or not.

Therefore, "ethical symmetry" would not entitle Rush to receive direct benefits from Fluke's sexual activity.
So in addition to being horrendously insulting, Landsburg's point is just flat-out logically unsound.
Bloggers and economists, here's a hint: Just because an idea or argument is offensive to the moral sensibilities of the general public (or of liberals) does not make that idea correct or smart. It is easily possible to slip well below the efficient frontier of the accuracy/acceptability tradeoff. Dr. Landsburg, you have made such a slip here.


Update: Via Brad DeLong, I see that the president of the University of Rochester, where Steve Landsburg is employed, has strongly disavowed Landsburg's disgusting statements. Good.
Author: Noah Smith Posted at 8:06 PM