Down with particle physics, up with Big Energy Research! 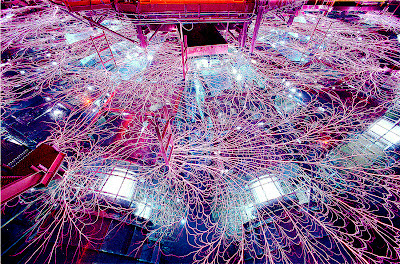 Nobel Prize winning physicist Steven Weinberg has a big article in the New York Review of Books lamenting the crisis in Big Science. He focuses on two areas that are in danger of being deprived of funding: 1) particle accelerators, and 2) telescopes.

Weinberg is a particle physicist, one of the heroes who developed the Standard Model. Thus it is not surprising that most of his article concentrates on particle physics experiments. Unfortunately, I think that appeals for governments to pour more money into particle accelerators are A) doomed to fall on deaf ears, and B) not really very convincing in the first place. Let me explain why.

First of all, the Standard Model of particle physics is good. Really good. In fact, we've never conducted an experiment where it makes an incorrect prediction at any level of precision!! In that sense, it is one of the most successful theories ever. Now, the Model may or may not fail at ultra-high energies (such as those that could be produced inside a black hole or a multibillion-dollar particle accelerator), or at galactic distances. But these are not environments that will ever matter for human beings on Earth.

As Weinberg points out, the Standard Model is incomplete. It doesn't include gravity. But we have another theory, general relativity, whose track record is just as good, to describe gravity. Unifying these theories would increase our understanding of the nature of the Universe, but it's not clear whether it would improve our ability to predict our immediate surroundings.

In other words, new particle accelerators may be able to answer interesting questions, but they are unlikely to produce much of technological value.

In fact, this has proven true for the last several generations of particle accelerators. We've discovered a zoo of new particles, and these discoveries have improved our theories greatly. But none of these new particles has been something we can exploit for technological applications. In the early 20th century, new fundamental physics led rapidly to applications like nuclear bombs, semiconductors, lasers, and GPS. But to my knowledge, nobody is even trying to make a device that exploits the properties of B-mesons or neutrino mass.

To this, add another problem, which Weinberg discusses: We actually have no idea if the "next generation" of particle accelerators would find anything useful. In the past, we always had new theories that predicted stuff we should expect to see if bigger accelerators were built (for example, the Large Hadron Collider was built to search for the predicted Higgs Boson). As of now, new physics theories have made no new concrete predictions about what should come out of bigger and more expensive accelerators. If we build those accelerators, it will purely for speculative, exploratory purposes - to see what might be out there.

So basically, if physicists focus on asking for billions of dollars for new particle accelerators (the Large Hadron Collider cost $9B and the next one would certainly be a lot more), they are almost certain to be disappointed.

And guess what? It is hard for me to label this a tragedy. Yes, I think it is very important to push the boundaries of our understanding of fundamental physics. But our society is facing huge, immediate problems - most pressingly, the imminent end of the fossil fuel era.

The increasing cost of fossil fuels is an absolutely huge problem. It is nipping at the heels of our civilization like a T-Rex in the rearview mirror. At its most apocalyptic, the fossil fuel crunch threatens to yank back most of the gains our species has made in the last three centuries. Even a more reasonable assessment puts us in danger of shrinking economies, transportation breakdowns, declining living standards, and technological stagnation. And as for global warming, the only way we are going to halt climate change is by inventing clean energy sources so cheap that we simply leave coal and shale oil and tar sands sitting in the ground.

The energy crunch is a problem that Big Science is uniquely equipped to fight. Burning stuff is easy. Converting sunlight into electricity and transporting it hundreds of miles, then storing the energy in an electric car, is hard. Designing genetically engineered organisms to suck CO2 out of the atmosphere and combine it with sunlight to produce oil is even harder. Creating controlled nuclear fusion is the hardest of all.

But if we are going to replace fossil fuels, we are going to have to do one or more of these hard things. There is just no other option. It's Big Science or bust. Our nation needs to be spending many, many billions of dollars - tens of billions each year, at the very least - on Big Energy research to create better solar power, better biofuels, and better nuclear power.

This may mean temporarily halting the progress of big-budget particle physics. Sure, the money for Big Energy Research could (and should!) be taken from other, even less useful government spending, such as the V-22 Osprey, oil company subsidies, or "health care". In fact, putting sufficient money into Big Energy Research is almost certainly going to require shifting money from all of these sources. But to the extent that the public is reluctant to shift unlimited government dollars into Big Science, there will have to be tradeoffs.

And more important than the money tradeoff may be the talent tradeoff. Currently, thousands of our best physicists are being shunted into careers in experimental particle physics, spending their lives working at CERN or Fermilab. These are our very best physics brains, and they are a very scarce commodity. In my opinion, we need these people to be working on solar power, biofuels, and nuclear power. Applied physics is not as intellectually thrilling or as nerd-glamorous as fundamental physics, but we can ill afford to pay our super-nerds to indulge their philosophical whimsy at a time like this.

So I am suggesting, not an abandonment of Big Particle Physics, but a pause. If and when energy stops getting more expensive and resumes its march toward abundance, our species will have the breathing room to look for answers to questions like how to combine gravity with the Standard Model. Until then, we are in crisis mode, and all of our Big Science resources - and more - should be going into fighting the T-Rex.

(Update: Some people have taken issue with me putting "health care" in quotes and saying we need to cut it. Actually I think we should nationalize healthcare, drive costs down, and implement a system where doctors are incentivized to improve health outcomes, not increase the number and cost of procedures...hence the scare quotes.)
Author: Noah Smith Posted at 2:41 PM