Why I could be a much better economist than I am 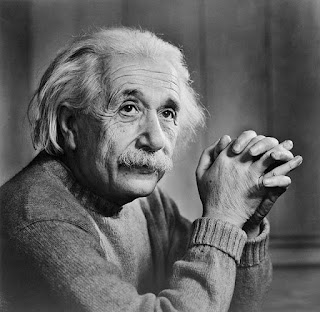 Most economists would not admit in public that they are anything less than virtuosos at what they do. But I am not "most economists". So I'll admit it: in many ways I am not that great of an economist. The part that gives me trouble is not the math - there's nothing in most econ papers that I didn't do as a sophomore in undergrad. The part that gives me trouble is the intuition.

Applied math disciplines, like physics and economics, are about 30% math skill and 70% intuition. History bears this out. Einstein, generally considered the greatest physicist of the 20th century, was no great mathematician; he needed help from Poincare, Hilbert, Minkowski, and other pure math people to work out some of the trickier aspects of relativity. But where Poincare, for example, failed to intregrate the math of special relativity (which he invented) into the rest of physics theory, Einstein's unmatched intuition allowed him to do this.

Physics was always my best academic subject by far, because I had that knack for intuition. Friends of mine who were absolutely brilliant at math (including one who published math papers in high school and now teaches at Harvard) would try taking physics classes with me, and I would end up helping them, because for some reason I could "think like a physicist" in way that allowed me to circumvent the need for tedious calculations. For example, what's the force on a charged particle that is near to a charged sheet? If you start from the math, you integrate the force from all elements of the charged sheet; it takes a few minutes of your time. But if you understand intuitively how electric fields work, you can use something called Gauss' Law to find the answer instantly; no time-wasting integral needed. If you can switch rapidly back and forth between this "symmetry" approach and the standard "furious calculation" approach as needed, you'll do well on physics tests and theory research too.

Anyway, to make a long story short, this approach never worked as well for me in economics. There are some things I seem to have good intuition for, like Bellman equations and search models. There are some things I didn't have any intuition for when I started, but got more with practice (game theory). And then there are some things that have stubbornly resisted my attempts to understand them instinctively. Much of macroeconomics falls under this heading. Reading most macro papers, I can follow the math, but I have no idea why the modeler chose to do things the way they did, and I wouldn't have been able to invent the same model if someone had told me to model the same phenomenon. This is true not only for original, breakthrough stuff, but for pedestrian models that are small tweaks on existing models.

I've wondered why this is, and I've concluded that it's mostly because there are few bedrock principles I can go back to. Example: I was sitting around with an economist friend and spinning a story about why financial market failures might make people stop working during recessions. He furrowed his brow and asked me "But how can that make people work more during booms?" To which I had no answer. It hadn't occurred to me, until that moment, that increased labor supply (or increased capital usage) was necessary for a boom. That's a simple concept, and it was built into all the models I had studied and worked through in class, but the fact of it had eluded me!

So of course I answered "Well, maybe there are no such things as 'booms', maybe what we see as 'booms' are just a normal-functioning economy, and any downward deviation in employment or growth is just a market failure." And of course, it's possible to build models like that, and maybe it's even true! But still, without understanding and accepting the idea that labor supply exceeds its sustainable long-term level during a "boom," it's hard to understand most of the popular business cycle models on a deep, intuitive level, because most of them attempt to explain the "phenomenon" of fluctuations of output and unemployment around a trend.

Another example is labor market clearing. I never really managed to pound into my head the notion that labor markets clear (because hey, unemployment exists!). And of course there are models in which labor markets don't clear, but these models are generally built by starting with a model in which labor markets clear, and then adding a friction (e.g. sticky wages) to stop them from clearing. I would have had a hard time making such models. And, perhaps of more immediate importance, I sometimes forgot the labor market clearing condition on tests! I'd be sitting there thinking "How do I close this system of equations?" for 5 or 10 minutes before I slapped my head and thought "Duh, labor market clearing!" This is in contrast to physics, where I'd whip out Gauss' Law pretty much instantly. This is the kind of dumbness that mathematical sophistication can't prevent; you can't solve a system of equations until you know which equations to write down!

(Side note: Another problem I have when making macro models is that I can't really decide which stylized facts I want to try to explain, mainly because I don't really believe in time-series econometrics, and hence I don't believe in most stylized facts. This is a somewhat different issue, though.)

Now, anyway, what I could do would be to say "Actually, it's not my fault, it's the discipline's fault. The economics Overmind has pounded a bunch of notions into people's heads that aren't really true; the only reason good macroeconomists can make their models so easily is that they share the same bunch of wrong assumptions." That would fit with the irreverent, pugnacious tone of this blog. But is isn't really true. A good economist - especially a macroeconomist - can master a form of doublethink. "I know this assumption isn't true," (s)he thinks, "but to make this model I need to act like I believe it's true." This is a trick I haven't really mastered, and it probably has more to do with my lack of an undergrad economics education than with the wholesale brainwashing of the entire econ profession.

In physics, you don't have to use doublethink, because the laws and principles you use really are true; even if you neglect friction, for example, you've probably got a good description of the motion of a hockey puck or a satellite. Econ is more about building toy worlds that don't exist - can't exist - anywhere, just to clarify your thinking. This is a mental skill that is probably best learned at age 18, and I was 26 when I started learning econ.

So, for example, I wouldn't easily be able to write anything like Larry Summers' critique of RBC models. Summers has the intuition to understand quickly, but at a very deep level, how these toy economies work and what makes them tick. I don't. And so my critique of RBC would be something more along the lines of "What are you even talking about?!" Which makes more for a cathartic blog rant than a thoughtful academic rebuttal.

Anyway, fortunately for me, I discovered (late in the game) that I have a much better intuition for finance theory (and, increasingly, for game theory!) than for macro. You don't always have to use doublethink. The CAPM might be an excellent description of risk under certain conditions. For worlds where only a certain kind of frequent, routine change occurs, Black-Scholes is probably a great model of option value.  And the decision problems of single agents trying to maximize simple utility functions in complex environments are a lot easier for my brain to work with. So I think I made the right move, in terms of transitioning toward a field where the mental techniques I learned in my undergrad physics classes have a better chance of succeeding.

But I still wish I was better at doing the other kind of economics - the doublethink, the useful oversimplification, the internally consistent fantasy storytelling. Well, I guess everyone needs goals to work toward...
Author: Noah Smith Posted at 2:34 PM