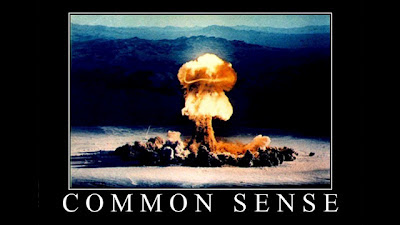 Two items regarding macro policy have caught my eye this past week. The first is Gideon Rachman arguing for fiscal austerity. The second is Paul Krugman's assertion that Ben Bernanke has been assimilated by the hard-money Borg.

Why are all these people arguing for things like hard money and austerity? Do they believe in some model - some RBC variant, perhaps - that tells them that now is not the time for quantitative easing and fiscal stimulus? If so, they aren't publicizing the fact. My guess is that it's not really about models and theories at all - policymakers and pundits basically don't buy into any macro model, and so are falling back on their own reflexive intuition.

First, take Rachman. His arguments for European austerity are far weaker than his typical logical perspicacity would lead one to expect.

Second, Rachman points out that European debt levels are already high. But if you broke your arm and didn't have health insurance, it would be moronic to say "Well, I'm already deeply in debt, so I shouldn't borrow any more money to treat my broken arm." If austerity hurts growth - and there is strong evidence that it does - then existing debt levels are irrelevant.

Third, Rachman says that Europe's real task is structural reform. This opinion echoes that of economists like John Cochrane. But does the case for structural reform affect the case for countercyclical fiscal policy? No. Because unless you believe that bad business environments cause recessions, improving structural factors won't stop the business cycle.

So Rachman is making weak arguments (for a more constructive rebuttal, see Ryan Avent). Why? Rachman is a smart, reasonable guy. My guess is that he doesn't really believe in any model or theory of the macroeconomy, and he's just recommending austerity because it sort of seems prudent. After all, spending more than you earn is usually a bad idea, right? I mean, come on, everybody knows that, it's obvious. It's "common sense". Economic theories, like all scientific theories, are built to be counterintuitive - if our common sense was sufficient to allow us to understand the economy, we wouldn't need science. By chucking theory and saying "Come on, cut the crap, everyone knows that austerity is the sensible, responsible, prudent thing to do," Rachman is implicitly saying that economic science is crap and common sense is all you need.

Now, Ben Bernanke. Paul Krugman points out that as a professor, Bernanke wrote papers that advocated quantitative easing; now, as a policymaker, he's much more shy about doing it. Krugman's explanation is social; being around a bunch of hard-money Fed guys (who are obsessed with the Fed's inflation-fighting credibility but blase about the Fed's depression-fighting credibility) has swayed Bernanke by good old peer pressure.

I have a somewhat different hypothesis: I think Bernanke is dealing with a severe case of model uncertainty. Think about it. A professor's job is to say "Here is a way the world might work." A policymaker has to say "OK, I am going to act as if the world works this way." The latter requires a LOT more faith in the model's correctness than the former. It seems highly likely to me that Fed Chairman Bernanke does not believe in Professor Bernanke's theories enough to make big bets on them.

The more I read about monetary policy, the more convinced I become that humankind does not really understand it very well. With some assumptions - a certain kind of price stickiness, for example - you can derive an optimal monetary policy rule. But those assumptions are almost certainly crap, included for mathematical tractability (e.g. Calvo pricing), or capturing only one small piece of what's really going on. When you're a policymaker, you don't care about mathematical tractability, and you can't afford to focus only on one piece of what's going on.

The fact is, we just don't know what monetary policy is the best. Maybe QE is a good idea (I think it is!). Maybe a rule like NGDP level forecast targeting is a good idea (I am skeptical but it doesn't sound too bad). Or maybe the amount of QE needed to produce a noticeable movement in employment is so huge that it really would cause serious inflation. Maybe monetary policy operates with "long and variable lags," as Milton Friedman suggested, meaning that it's very difficult for the Fed to know the consequences of its actions. I am not economically illiterate. I can easily find, read, understand, and explain a paper supporting any of these contentions. But at the end of the day I'm willing to bet you that I won't really know how right the paper is. At best, my opinions will probably only have shifted slightly. I am guessing this because I've never read a monetary policy paper that convinced me that "OK, this has got to be how the world works."

So I think that Ben Bernanke has been paralyzed into inaction by the realization that, his academic papers aside, he doesn't really know if QE would be good or bad.

So the upshot of this blog post is this: People do not believe in macro models. Macroeconomics is not a science that has, as of May 2012, proven itself in the way that chemistry, biology, or various branches of microeconomics have proven themselves. And so when push comes to shove - as it has - people fall back on their gut reactions, going "Hrrrrrm, austerity, yes, prudent!" or "Hrrrrrm, inflation, yes, scary!" Do I disagree with this Hrrrrrrm-ing?? Sure! MY intuition says something different. And I think the academic literature supports my position more than that of the austerians and hard-money people. But I understand how model uncertainty makes the case for stimulus and QE less than a slam-dunk.
Author: Noah Smith Posted at 12:56 AM