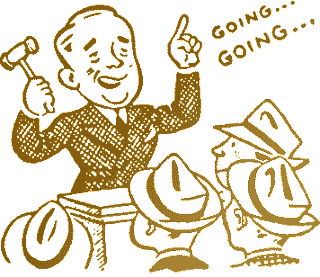 Economic theorists have worked hard to lower expectations for their field. The standard line (originally due, I think, to Keynes?) is that, unlike a science like biology that can be applied to the real world, economic theory merely gives people a way to think about complex issues in an intellectually disciplined, rigorous manner. One subtext is that economic theory need not be subjected to the rigors of the scientific method; that theory need not match data, and that the criterion for judging a theory a success should basically be that other economists think the theory is cool. Another implication is that the study of economic theory need not ever be justified by the present or future creation of useful technologies. In other words, it doesn't have to be right or useful, only interesting.

In a recent interview, game theorist Ariel Rubinstein says this of his own field:


Is game theory useful in a concrete sense or not? Game theory is an area of economics that has enjoyed fantastic public relations...I think it’s a very tempting idea for people, that they can take something simple and apply it to situations that are very complicated, like the economic crisis or nuclear deterrence. But this is an illusion...I don’t respect the claims that [game theory] has direct applications...

Game theory is about a collection of fables. Are fables useful or not? In some sense, you can say that they are useful, because good fables can give you some new insight into the world and allow you to think about a situation differently. But fables are not useful in the sense of giving you advice about what to do tomorrow, or how to reach an agreement between the West and Iran. The same is true about game theory...

In general, I would say there were too many claims made by game theoreticians about its relevance. Every book of game theory starts with “Game theory is very relevant to everything that you can imagine, and probably many things that you can’t imagine.” In my opinion that’s just a marketing device...

[We do game theory] because it is interesting...I believe that intellectual thinking – philosophy or logic or game theory – is very useful in the cultural sense. It’s part of the culture, it’s a part of our perpetual attempt to understand ourselves better and understand the way that we think. What I’m opposing is the approach that says, in a practical situation, “OK, there are some very clever game theoreticians in the world, let’s ask them what to do.” I have not seen, in all my life, a single example where a game theorist could give advice, based on the theory, which was more useful than that of the layman...

I categorically cannot see any case where game theory could be helpful.

Naturally, this opens the economics field to the obvious criticism of "Well, fine and good, but then why do we pay econ theory professors so much more than literature professors?" (That, as you might expect, is not a question that many economic theorists are eager to bring up in conversation.)

I'm talking about auction theory. Auction theory describes a situation where the sequence of moves is known, and the payoffs are (close to) constant - i.e., just the kind of situation where game theory allows concrete predictions. And lo and behold, auction theory is used to power the internet's most successful advertising technology: Google's AdWords. Everyone except Google has had trouble making money off Web advertising (look at Facebook), but with the help of auction theory, Google has built one of America's most profitable technology businesses.

That's real technology based on economic theory. It's really just one subset of mechanism design, which (people tell me) is the hottest sub-field of game theory right now. Mechanism is deep, pure economics - it's the science of incentives. And because there are real situations in which incentives are observable and well-defined, you can use mechanism design to predict and control the outcomes of certain kinds of transactions and interactions. That's applied economic technology, just as surely as your smartphone is applied computer science technology.

So why do we pay all these theorists all this money? Are a few auction applications really such a big deal? To this I respond: There may be big payoffs in the future. If economists can use theory to understand the business cycle, then this may lead to technologies that allow companies to anticipate and prepare for downturns, as well as - even more importantly! - government policy technologies that allow the government to prevent or effectively fight recessions. That would be a huge prize. In fact, many people believed (and some still believe) that the development of monetarist/New Keynesian/demand-based macro theory in the mid to late 20th Century has dramatically improved central banks' ability to fight recessions. If so, then that is a very important economic technology. But maybe we can do a lot better than that.

One obvious question raised by this post is: Why is there essentially no game theory in macroeconomics?...

Update: Speak of the devil. I'm now watching Gunter Strobl of the NY Fed UNC Chapel Hill present a model that uses game theory (with adverse selection and moral hazard) to explain liquidity cycles. Not sure how well the model works yet, but glad to see people doing this sort of thing...

Update 2: I am now watching Marcus Opp of Berkeley add I/O-style game theory to a macro model to show how oligopolistic competition could amplify business cycles. Love it. Not sure why Opp doesn't follow Rotemberg & Woodford (1992) and use AD shocks (he uses RBC-style productivity shocks). I do like that the model uses inelastic labor supply.
Author: Noah Smith Posted at 6:19 PM