How does this "fake GDP" work? 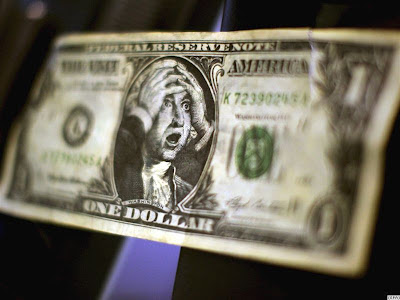 Actually, it's incredibly easy to create fake GDP. You simply scratch my back and charge me $10, and then I scratch your back and charge you $10. Repeat that 750 billion times, and you'll double the GDP of the United States. I'm dead serious. Expenditure and income will both go up by $15 trillion, all of it in the "back-scratching services" sector.

Really, the question is why you'd want to create fake GDP. If you got $10 in additional income, you probably wouldn't spend it on a back scratch you didn't want. Economists typically assume that the dollar transactions that go on in our economy represent exchanges of scarce resources - that people would prefer to spend their money on things they want rather than things they have no need for.

So I just do not understand why so many people keep on insisting that our GDP before the financial crisis was "fake". Here's Steve Pearlstein:

Indeed, there is a suspicion that at least some of the downturn [in the UK] is a statistical mirage caused by the necessary adjustment to wages and prices following the bursting of that financial bubble. If the financial sector never really added as much genuine value to the economy as was indicated from all those inflated salaries and bonuses, then at least some of the decline in GDP since then may merely reflect a healthy repricing of labor, financial assets and goods across the economy rather than a worrisome loss of output. Low inflation, slowly rising employment, little or no growth in measured productivity, household incomes and GDP — these are all consistent with that story of statistical mirage.

This via Tyler Cowen.

OK, I just don't get it. First of all, if all that has changed are prices, not quantities, that should show up in the price level, as measured by the GDP deflator. Maybe Pearlstein thinks the GDP deflator is mismeasured, and that Britain has actually been experiencing a deflationary boom? How would such a thing be possible, unless some sort of secret supply shock had actually given the British economy a big boost? Is the UK secretly doing better than ever?

(Answer: No it's not. Look at unemployment.)

Anyway, if the GDP deflator is not grossly mismeasured, then the contraction in the financial sector entails not just a fall in prices, but a fall in the quantity of financial services performed. Pearlstein seems to be saying that yes, this has happened, but that this is OK, because these vanished financial services had not been adding value equal to their price.

Which makes us ask: If these services were not worth the price, why were people paying for them? People could have taken the money that they spent on financial services and spent it on cars or video games or sandwiches instead, or left it to their kids.

If you think that people were paying for useless crap before the crisis, then you must believe that people were tricked into throwing away their money on things they didn't need or want. Maybe that's true! Maybe people in a free market can be tricked en masse into flushing their income down a toilet. George Akerlof, for example, has spent a lot of time arguing that this is not just possible, but common.

But if you believe this, you believe that free markets are not always a great way of allocating resources. If people can be tricked to such a degree that the size of the trick makes the difference between a boom and a depression, well...that's one big trick! It would be a waste of resources as big as any war, except perpetrated by the invisible hand of markets instead of the visible hand of government. In other words, it would mean that free markets tend to fail, and fail massively.

So am I getting things wrong? Do Pearlstein and others mean something else when they claim that part of GDP is a "statistical illusion"? What is this "fake GDP" they speak of, and how does it work??
Author: Noah Smith Posted at 6:42 PM