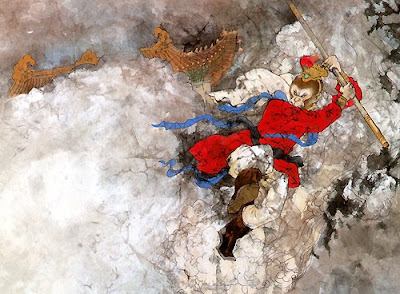 There is a line of analysis that I see a lot in the press, that goes like this: For thousands of years, China economically dominated the world. Therefore, China's rapid growth is just a case of reversion to the mean; we should expect China to go back to being the same percent of world GDP that it always was before.

Now, I fully agree with the idea that China will return to being a bigger portion of world GDP. That's just "conditional convergence". It's a function of the Solow model. There is no good reason for 20% of the world's populace to produce less than 20% of the world's output in the very long run.

BUT, that being said, the people who make this claim seem to get their history a bit wrong. For example, here is a graph used by Deutsche Bank and PWC to make the point: 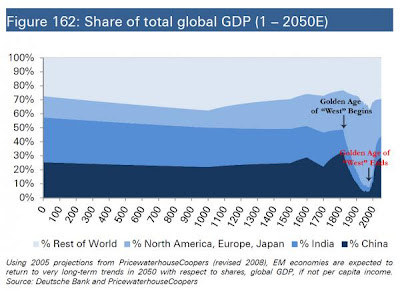 And here is one used by Michael Cembalest of JP Morgan:

Finally, here is one used by The Economist:

Angus Maddison's methodology, if I'm not mistaken, is something like this:

1. Assume that pretty much everyone prior to the 1700s was a farmer.

3. Multiple population by agricultural productivity to get GDP.

So, here is the first problem with those charts: They leave out many of the major farming regions of the old world. For example, in the Roman Empire, the most productive agricultural region was Egypt. In fact, the Eastern Roman Empire had much higher agricultural output than the Western Roman Empire (France/Italy/England/Spain), which motivated it to periodically try to secede.

Leaving out these regions skews the ratio wildly in China and India's favor. Including the entire Roman Empire would make the numbers for 100 AD look wildly different. For example, at its height, the Roman Empire, including all those Eastern Roman territories, had between 29 and 39 percent of the world's population. China's Han Dynasty, which was contemporary with the Romans, had only 26% of the world's population. Therefore, by agricultural output alone, Rome probably produced more GDP than China. Also, there was the entire Islamic Caliphate, which was a big deal from 700 - 1200 AD.

The second problem I have with those charts, and the conclusion drawn from them, is that they do not account for changes in the distribution of world population. In 100 AD, Germany was a sparsely inhabited forest. North America was mostly wilderness. China, in contrast, was densely settled. Today, things are different. The clearing of West Europe's forests in the early 2nd Millennium AD is why West Europe is now a densely settled population center instead of a backwater. Similarly, the colonization of North and South America, and the waves of immigration to the Western Hemisphere, has permanently altered the global population balance. China, despite going on a breeding binge that made it one of the world's most densely (over)populated regions, represents less than 20% of the world's population now, as opposed to over 25% in ancient times. As China ages, this percentage will shrink further.

In other words, China will not automatically return to its old percentage of world GDP, since the Western Hemisphere and West Europe are now on the map.

Now, on to my third problem: I think Angus Maddison may be doing things wrong. I realize this is a rather presumptuous thing to say, but I think it's true. Specifically, the assumption that GDP before 1700 was proportional to agricultural productivity seems to me not to be a good one. The reason is that even in a non-industrial society, there is a potentially huge source of GDP increases: trade. Remember, in a world where output is mostly in the form of commodities (i.e. no increasing returns to scale), the old Ricardian theory of trade makes a lot of sense. Stable ancient empires that could act as free trade zones were probably capable of dramatically increasing their per capita GDP beyond the base provided by the productivity of their land.

This is the finding of Ian Morris in Why the West Rules For Now. He constructs a "social development index" that includes things like urbanization and military capabilities, and probably correlates with an ancient region's per capita GDP (it is hard to build cities and make war without producing stuff). He finds dramatic changes in this social development index over the course of the Roman Empire; at its height, Rome seems to have been extremely rich, but a couple centuries earlier or later it was desperately poor. Morris corroborates this index with data on shipwrecks, lead poisoning, and other things that would tend to correlate with output. Basically, Rome saw huge fluctuations in per capita GDP. But it is unlikely that Rome's agricultural productivity changed much over this time. Instead, what probably happened was the rise and fall of cross-Mediterranean trade.

So anyway, to sum up: These graphs don't tell us as much as people think they do about how world GDP was distributed in the past. So don't use them as a guide to the future.

Update: Some people have been commenting "What about the 'other' parts? Couldn't that include the other parts of the Roman Empire?" Sure, it might, though the charts don't make it clear (look at Chart 3; if "other" = Rome, why isn't 1 AD the "golden age of the West"?). And does the residual include those portions of the world where records were not well-kept? Does it include areas that relied on animal herding? Does it include the Americas properly? And why does Chart 2 (the one by Michael Cembalest) not include "other"? In general, these charts just seem to present the data - such as it is - in a very misleading way.
Author: Noah Smith Posted at 11:47 PM