The hard-money people throw Gene Fama under the bus 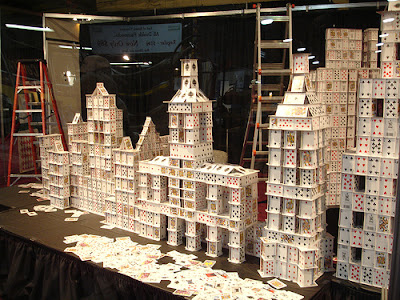 In the last year, the Macro Wars have been mostly going well for the Monetarist Alliance. My prediction that the Fed would shy away from further QE was dashed, and Bernanke came through for the Alliance in a big way with QE-infinity; Japan's central bank has promised even more. Meanwhile, the Hard-Money Coalition has lost a lot of intellectual cred, as inflation has quite spectacularly failed to materialize in response to ATMP ("All This Money Printing").

But the Hard-Money Coalition is far from beaten. Driven from the Inflation Hawk line of defense, the HMC is regrouping and falling back. The new line of defense is the Financial Instability argument. Basically, the idea is that even if QE doesn't create inflation, it distorts financial markets. From the ramparts of Castle WSJ, Amar Bhide and Edmund Phelps write:


The Fed said it would end easing at serious signs of faster inflation. But as the housing bubble that preceded the financial crisis showed, imprudent speculation can be destructive without high inflation. Today we have banks, insurance companies and pension funds leveraging their assets and loading up on credit risks because prudence cannot provide acceptable returns.

And back in January, John Taylor alleged that QE would cause "reaching for yield":

Basically, what the Hard-Money Coalition is doing is throwing the Efficient Markets Hypothesis under the bus. Sorry, Gene Fama! (Note: Someone really needs to start the #sorryfamanists Twitter hashtag.) For a bit more on just why the "reaching for yield" idea contradicts the EMH, see this Krugman post.

This is a savvy switch in tactics. Inflation is something we haven't seen since the 70s. Financial instability, however, is something we've seen a lot of recently. The housing crash and financial crisis convinced dang near everyone outside of finance and econ departments that markets are unstable, especially housing markets and markets driven by credit and leverage. Two groups of econ commentators - Austrians and Post-Keynesians - emerged from the woodwork and occupied much of the econ and finance blogospheres.

The subtext of the "financial instability" argument, and what that some people say explicitly, is that QE is creating - might one even say "inflating"? - a new housing bubble. It's 2006 all over again!

So the Hard-Money Coalition has just recruited itself a huge new batch of allies, many of them from the liberal side of the American political divide. For example, here is George Soros warning that central banks are creating financial instability. Here is Yves Smith saying much the same. And here's Cullen Roche warning explicitly of a new, QE-fueled housing bubble (see also here).

This new Macro War is much less of a liberal-vs.-conservative thing than was the fight over stimulus. It's more about mainstream macro vs. a coalition of non-mainstream groups. Macroeconomics is currently dominated by the ideas of Milton Friedman, especially the idea of a NAIRU, short-term monetary non-neutrality and long-term monetary neutrality, and above all the primacy of monetary policy. This is reflected in the dominance of the New Keynesian approach in business cycle theory and in central banks, and in the centrality of Friedman's ideas in most Econ 102 (introductory macro) classes. But if the "financial instability" meme takes root, this consensus is going to find itself facing a huge and unexpected new challenge.

So it's going to be interesting to watch.

Now where does little insignificant gadfly Noah Smith stand in this new battle? On one hand, I definitely think financial markets are unstable, and that bubbles are the biggest and most damaging manifestation of that instability. And the experimental evidence certainly suggests that more liquidity sloshing around in a market can give rise to bubbles, just as Austrians and Post-Keynesians believe.

But then again, I don't see a lot of anecdotal indication that QE is creating Housing Bubble, The Sequel. I agree with Robert Shiller that bubbles are characterized by optimistic expectations and general excitement. I don't see a lot of excitement about eternally-rising asset prices or a New Economy or a "This time is different" mentality. In fact, if John Taylor is right that QE is creating fear and uncertainty about future unwinding, then that seems like it should be pushing asset prices down, not up. It is well known that lower interest rates (or expectations of lower future interest rates) cause the fundamental value of houses and bonds to rise...so even if QE raises asset prices, that does not automatically indicate Bubble. I think it's likely that since humans tend to overweight recent experience in our models of how the world works, that we are too jittery about a repeat of the recent crisis, and probably paying too little attention to whatever the next crisis is going to be.

So while I'm not ruling out the idea that QE could create financial instability, I don't think it's going to be of the Big Bubble type. It would have to be something weirder and more subtle. Maybe interest rate spikes in Japan are this kind of thing. I'm not sure. So for now, I'll be watching this new Macro War from the sidelines.

(Of course, the question of financial effects of monetary policy, and whether the costs outweigh the expected benefits, is far too big to be dealt with so glibly, especially because so few models include this sort of thing. So this is just the beginning...)
Author: Noah Smith Posted at 12:50 AM