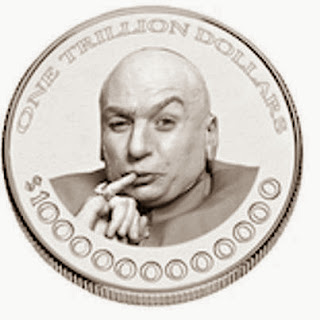 Back in January, when it looked like there might be another debt ceiling showdown, it seemed like all anyone could talk about was trillion dollar platinum coins (for those not familiar with the platinum coin idea and how it relates to the debt ceiling, read this and then come back). Most of the discussion was derisive, and I confess that at the time I was among the scoffers and mockers.

Now, with yet another debt ceiling crisis looming, I'm beginning to have second thoughts. It's true that, at least at first blush, the coin solution seems absurd. Part of that absurdity is probably based on misunderstandings about what the plan would entail (some people, for example, seem to have been under the impression that it would require the coin contain a trillion dollars worth of platinum). The important thing to remember is that there's nothing special about platinum coins per se; its just a legal loophole that allows the president to evade the debt limit. It's a bit like if there was an obscure statutory provision allowing the government to borrow unlimited amounts so long as the Treasury Secretary dressed like a pirate. It would be undignified and humiliating, but at the end of the day it would be better than risking default. 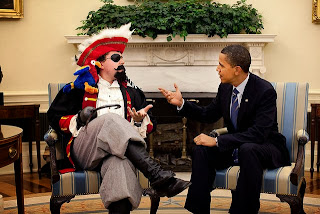 Or would it? My original concern with the coin idea was that it might precipitate the sort of crisis it was supposed to prevent. Ultimately, bond holders don't care about whether this or that solution to the debt ceiling crisis is "dignified." They just want to get paid. If the Administration were committed to using the coin if necessary, that might reassuring markets that default was not likely. On the other hand, it's also possible that committing to the coin might paradoxically make the risk of default seem more likely. After all, if a government has to resort to such tricks to keep paying its bills, how confident can we be that it will continue to do so, coin or no coin?

While the legal case for the coin may seem strong, it's not air tight. Courts have been known to imply limitations not explicitly in statutes based on concepts like "reasonableness," and it's clear that the intent of the law was not to allow the government to evade the debt ceiling. Given that a court would only be dealing with the matter after the fact, there would be enormous pressure to uphold the government's actions to avoid a financial crisis (in the Gold Clause Cases, for example, the Supreme Court basically eviscerated an entire provision of the Constitution to avoid a similar crisis). But what really matters is not my assessment, but rather the collective assessment of the market.

So the title of the post is (as yet) not quite accurate. I am still worrying, and I don't love trillion dollar platinum coins, though they may end up being the best of a bunch of bad options. Were I the president, I might leak that I was considering the idea as a means of testing the market's reaction.

Hopefully, though, it won't come to that. Hopefully the Congress will conclude that, however strongly they might disagree over policy, the disagreements aren't worth risking the full faith and credit of the United States. For in the words of Group Captain Mandrake, "we don't want to start a nuclear war unless we really have to."

UPDATE: On Twitter, John Hendrickson points me to a post of his arguing that the coin could result in more inflation, even if the Fed attempts to offset it, because of the way that monetizing the debt rather than buying more bonds could affect market expectations. Of course, a little more inflation right now wouldn't be such a bad thing, but this is another reason why you would want to test the waters first.
Author: Josiah Neeley Posted at 7:03 AM