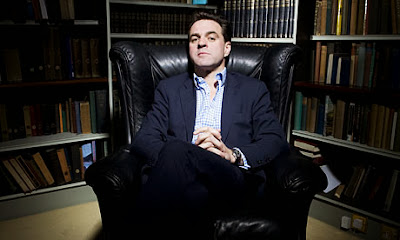 Seems implausible, doesn't it? In fact, I'm sure that after reading the title to this post, many of you are already preparing to launch another round of pleas to Noah to cast me into the outer darkness, where there is weeping and gnashing of teeth. But hear me out for a bit.

I pretty much agree with everything our beloved blog owner said in his response to Ferguson on Friday. Professor Ferguson has clearly let his critics get under his skin, and he really ought to have better uses for his time than writing a series of extremely long anti-Krugman articles which, like the Police Academy movies, get less compelling with each installment.

Nevertheless, in his first installment Ferguson does land a direct hit on the issue of the Euro, documenting Krugman's repeated and sometimes confident predictions that the Eurozone would collapse between 2010 and 2012:


By my reckoning, Krugman wrote about the imminent break-up of the euro at least eleven times between April 2010 and July 2012:
1. April 29, 2010: "Is the euro itself in danger? In a word, yes. If European leaders don't start acting much more forcefully, providing Greece with enough help to avoid the worst, a chain reaction that starts with a Greek default and ends up wreaking much wider havoc looks all too possible."
2. May 6, 2010: "Many observers now expect the Greek tragedy to end in default; I'm increasingly convinced that they're too optimistic, that default will be accompanied or followed by departure from the euro."
3. September 11, 2011: "the euro is now at risk of collapse. ... the common European currency itself is under existential threat."
4. October 23, 2011: "[the] monetary system ... has turned into a deadly trap. ... it's looking more and more as if the euro system is doomed."
5. November 10, 2011: "This is the way the euro ends ... Not long ago, European leaders were insisting that Greece could and should stay on the euro while paying its debts in full. Now, with Italy falling off a cliff, it's hard to see how the euro can survive at all."
6. March 11, 2012: "Greece and Ireland ... had and have no good alternatives short of leaving the euro, an extreme step that, realistically, their leaders cannot take until all other options have failed - a state of affairs that, if you ask me, Greece is rapidly approaching."
7. April 15, 2012: "What is the alternative? ... Exit from the euro, and restoration of national currencies. You may say that this is inconceivable, and it would indeed be a hugely disruptive event both economically and politically. But continuing on the present course, imposing ever-harsher austerity on countries that are already suffering Depression-era unemployment, is what's truly inconceivable."
8. May 6, 2012: "One answer - an answer that makes more sense than almost anyone in Europe is willing to admit - would be to break up the euro, Europe's common currency. Europe wouldn't be in this fix if Greece still had its drachma, Spain its peseta, Ireland its punt, and so on, because Greece and Spain would have what they now lack: a quick way to restore cost-competitiveness and boost exports, namely devaluation."
9. May 17, 2012: "Apocalypse Fairly Soon ... Suddenly, it has become easy to see how the euro - that grand, flawed experiment in monetary union without political union - could come apart at the seams. We're not talking about a distant prospect, either. Things could fall apart with stunning speed, in a matter of months."
10. June 10, 2012: "utter catastrophe may be just around the corner."
11. July 29, 2012: "Will the euro really be saved? That remains very much in doubt."

Reading this section of Ferguson's article was particularly painful for me, as I was very much in agreement with Krugman on the likelihood of a Eurozone breakup. And, in fact, I still think the economic arguments Krugman used to support his position were sound.

And yet, it didn't happen. The Euro not only didn't implode, but as Ferguson notes, new countries continue to join.

As the political scientist Philip Tetlock has demonstrated, experts tend to be pretty bad at making accurate predictions even on areas that involve their subject of expertise:


In the most comprehensive analysis of expert prediction ever conducted, Philip Tetlock assembled a group of some 280 anonymous volunteers—economists, political scientists, intelligence analysts, journalists—whose work involved forecasting to some degree or other. These experts were then asked about a wide array of subjects. Will inflation rise, fall, or stay the same? Will the presidential election be won by a Republican or Democrat? Will there be open war on the Korean peninsula? Time frames varied. So did the relative turbulence of the moment when the questions were asked, as the experiment went on for years. In all, the experts made some 28,000 predictions. Time passed, the veracity of the predictions was determined, the data analyzed, and the average expert’s forecasts were revealed to be only slightly more accurate than random guessing—or, to put more harshly, only a bit better than the proverbial dart-throwing chimpanzee.

Not only do experts only do slightly better than chance, on average, but it turns out when it comes to making accurate predictions, level of expertise faces rapidly diminishing marginal returns:


In political and economic forecasting, we reach the inflection point surprisingly quickly. It lies in the vicinity of attentive readers of high-quality news outlets, such as The Economist. The predictive value added of Ph.Ds, tenured professorships and Nobel Prizes is not zero but it is disconcertingly close to zero.

When experts do turn out to be wrong, Tetlock reports, they typically do not concede that they have made a real error. Instead, they are inclined to make excuses: my predictions were right, it's just that the timing was off. I would've been right, but an unforeseeable factor changed the equation. And so on.

Certainly when it comes to the Eurozone crisis, these are the excuses that jump readily to my mind. Sure, Europe has managed to stave off collapse for now. But the problems with the Euro are still there, and eventually they will out. The Eurozone would have collapsed if Draghi hadn't said that the ECB would do what it took to prevent it, and who could've foreseen that? And is Niall Ferguson really the best person to being making accusations here? Back during the height of the crisis he was speculating about a Eurozone break up too.

I would like to go along with such excuses, but I can't quite make myself do it. While Draghi's intervention wasn't foreseen by a lot of people, it's hard to say that it wasn't foreseeable. And claiming that the Eurozone will collapse "someday" is all but unfalsifiable. I'm afraid the lesson here is that even getting the economics right doesn't help you much in predicting an outcome that depends not only on economics but also on politics (which, broadly speaking, most macroeconomic issues do).

According to Tetlock, there are ways to improve one's predictive accuracy. Experts "who tended to use one analytical tool in many different domains... preferred keeping their analysis simple and elegant by minimizing 'distractions'... [and] were unusually confident" were less accurate on average. By contrast, the better predictors:


used a wide assortment of analytical tools, sought out information from diverse sources, were comfortable with complexity and uncertainty, and were much less sure of themselves—they tended to talk in terms of possibilities and probabilities and were often happy to say “maybe.” In explaining their forecasts, they frequently shifted intellectual gears, sprinkling their speech with transition markers such as “although,” “but,” and “however.”


So I think that Ferguson is right that a little more humility is in order, even if he himself doesn't really practice what he preaches.
Author: Josiah Neeley Posted at 3:30 AM