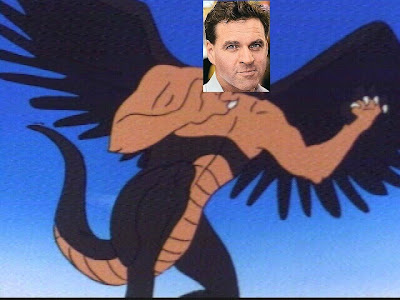 I'm breaking my blogging hiatus to briefly respond to Niall Ferguson, not because I'm mad, but because it's fun. For those who haven't seen it, Ferguson has posted a massive three-part rant (part 1, part 2, part 3) in which he attempts to take Paul Krugman to task for making wrong predictions, for being a big meanie, etc. etc. The series is titled "Krugtron the Invincible", after my blog post of the same name. In fact, Ferguson references me in part 1 of his rant:


The resemblance between Krugman and Voltron was suggested by one of the gaggle of bloggers who are to Krugman what Egyptian plovers are to crocodiles.


For too long, Paul Krugman has exploited his authority as an award-winning economist and his power as a New York Times columnist to heap opprobrium on anyone who ventures to disagree with him. Along the way, he has acquired a claque of like-minded bloggers who play a sinister game of tag with him, endorsing his attacks and adding vitriol of their own. I would like to name and shame in this context Dean Baker, Josh Barro, Brad DeLong, Matthew O'Brien, Noah Smith, Matthew Yglesias and Justin Wolfers. Krugman and his acolytes evidently relish the viciousness of their attacks, priding themselves on the crassness of their language.

Having been named, but not successfully shamed, I feel I ought to make a few points in response:

1. The Egyptian plover does not, in fact, eat meat out of the mouths of Nile crocodiles. That is a myth.

3. Some of Krugman's critics have good points. Others seem driven mainly by personal dislike for Krugman's polemical style or liberal politics. But a few seem to be motivated by a peculiar type of intellectual inferiority complex. They seem to believe that by catching a famous "smart guy" like Krugman making a mistake, they can prove themselves to be highly intelligent. Naturally, this doesn't actually work. Ferguson should worry about whether he falls into this latter category of Krugman detractors.

4. Of course, there is a fourth reason for criticizing a public intellectual: pure enjoyment. Ferguson seems too angry and bitter for his Krugman-bashing to be motivated by pure fun, but my own occasional Ferguson-bashing (see here and here) was motivated each time by the peculiar glee that comes from giving a really bad article the thorough point-by-point thrashing that it deserved.

5. My advice to Ferguson would be: Unless you're aiming for your legacy as a public intellectual to be "that British guy who constantly went after Paul Krugman", I'd suggest finding something else to write about. History, for example. I hear you're a very good historian.

6. To readers: If you really want to read more Ferguson-bashing, see Matt O'Brien and Josh Barro.
Author: Noah Smith Posted at 12:24 AM