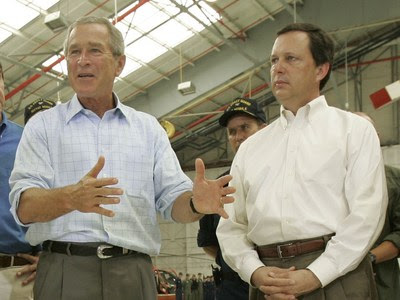 Lots of people seem to think that A) government is very inefficient, and that therefore B) we can make society more efficient by cutting the size of government. But actually, (B) doesn't follow from (A). And in fact, the very thing that makes government inefficient in the first place might make cutting it a bad idea!

Why is government inefficient? Because of incentives. Companies generally make hiring and investment decisions based on a marginal cost/marginal benefit calculation (though corporate institutions can of course get in the way of that, and if there are externalities then it's not efficient, etc. etc.). But government makes its decisions based on some other kind of cost-benefit calculation entirely. Sadly, we don't have a good understanding of government decision-making, and this is an area that could use a LOT more research attention than it is getting.

Anyway, because government doesn't make decisions on a monetary cost/benefit margin, it tends to be inefficient. But because of that, if you take a hacksaw to government, starving it of funds or demanding that it fire workers and close divisions, these firing and closing decisions will not be made on a cost/benefit margin. If you force a corporation to downsize, it will usually lay off the least productive workers first. But if you force a government to downsize, it very well might lay off the most productive workers while retaining the least productive ones!

Let's imagine a slightly more concrete example. Suppose that there are three types of government units:

A) Parasites: These units have figured out how to game the political process in order to make themselves quite secure and mostly untouchable, despite the fact that they mostly just extract rents from society without creating any value. They are entrenched vested interests of the type that Mancur Olson talks about.

B) Clunkers: These units are not politically well-connected, but they are inefficient. Maybe bureaucrats or voters thought that these things would be worth doing, but actually they're not.

(If you're either a starry-eyed anarcho-capitalist or someone who likes to spout anti-government rhetoric without thinking about it too hard, maybe you think that category (C) just doesn't exist at all, and that every single thing the government does would be done more efficiently in the absence of government. But you're wrong.)

Now suppose that someone like Grover Norquist comes along and decides to start hacking away at government indiscriminately. Which type of unit will get cut? Not the Parasites, certainly. They're too entrenched. It will be the Clunkers and Whiz Kids that get cut. If there are a lot more Clunkers than Whiz Kids, then this is OK, but if there are more Whiz Kids than Clunkers, then you're in trouble. And either way, cutting government increases the share of the horrible Parasites, and hence their relative power within government.

In fact, liberals often argue that this is exactly what happened during the Bush administration. The administration's botched handling of Iraq, Katrina, and other important challenges may be due in part to the administration's excessive belief in the efficiency of limited government. Perhaps instead of thinking about how to indiscriminately cut the size of the government, we should be focusing our efforts on how to tell the difference between efficient government units and inefficient ones, and - most importantly of all - how to excise the nasty Parasites.
Author: Noah Smith Posted at 12:21 AM