A lot of interesting unexplained phenomena in finance are related. Bubbles. Long-run reversion. Excess volatility. "Overreaction". All of these have to do with the general thing known as long-run stock return predictability. In other words, it really is possible to know when stocks are "cheap" or "expensive". This is one of the insights for which Robert Shiller won the Econ Nobel this year.

But why do stock prices mean-revert in the long run? This is the subject of an ongoing controversy - perhaps the most important controversy in finance. Some people say that it's because of time-varying risk premia with Rational Expectations; others say that it's because of people's incorrect information processing, and expectations are non-rational. In other words, it could be because what people want is kind of funky, or because how people think is messed up. But without some kind of independent measurement of either A) people's desires, or B) people's expectations, we'll never really resolve the controversy.

So that's why this 2012 paper by Andrei Shleifer and Robin Greenwood is so interesting. They take an extremely simple approach toward measuring people expectations: Just ask people what they think is going to happen! Actually, what they do is to take data from six different surveys of the stock market expectations of individual investors. For those who don't know, this is a pretty maverick thing to do; financial economists traditionally have not trusted survey data to reveal investors' true expectations.

So the first and most obvious question is: Do these "survey expectations" represent people's real beliefs?" The authors answer this in two ways. They first check that the six survey measures are correlated with each other; in fact, they are strongly correlated.

Second, and more importantly, they check that survey expectations are consistent with investors' actions. In fact, they are strongly consistent. Here's a graph displaying reported expectations (according to one of the surveys) alongside the amount of money flowing into equity mutual funds: 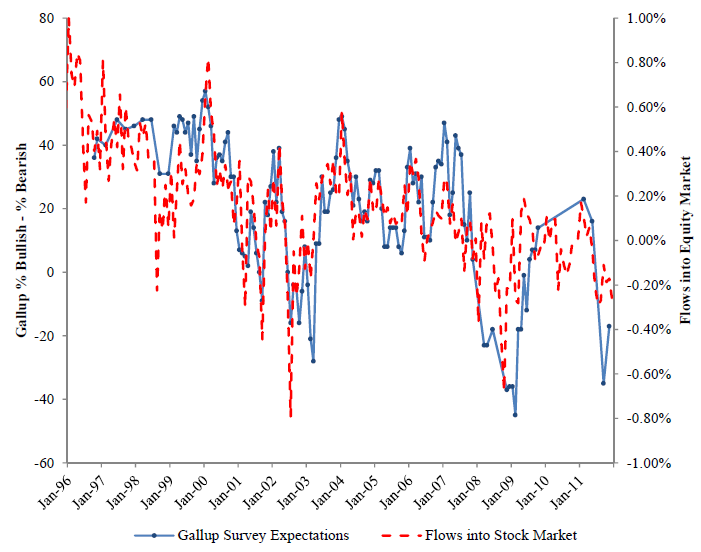 As you can see, when people say they expect stocks to do well, they actually put money into stocks.

So it seems as if you really can measure people's expectations about stock performance just by asking them! That is potentially big news for the future of finance research.

OK, so now we get to the really interesting question. What causes people to expect higher stock returns? The authors are behavioral economists, so they try out a behavioral explanation: "extrapolative expectations", also known as trend-chasing. In other words, when recent returns have been high, people expect the recent "trend" to continue, and buy accordingly. (This kind of expectation formation definitely doesn't fit the Rational Expectations hypothesis, but it could still fall under the looser heading of Bayesian rationality, if there is enough underlying structural change in the market.) Trend-chasing - and causes of trend-chasing, such as herd behavior - has received a fair amount of attention in the behavioral literature, though perhaps not as much as it should.

In fact, Greenwood and Shleifer find that the Extrapolative Expectations hypothesis seems to fit the facts very well: 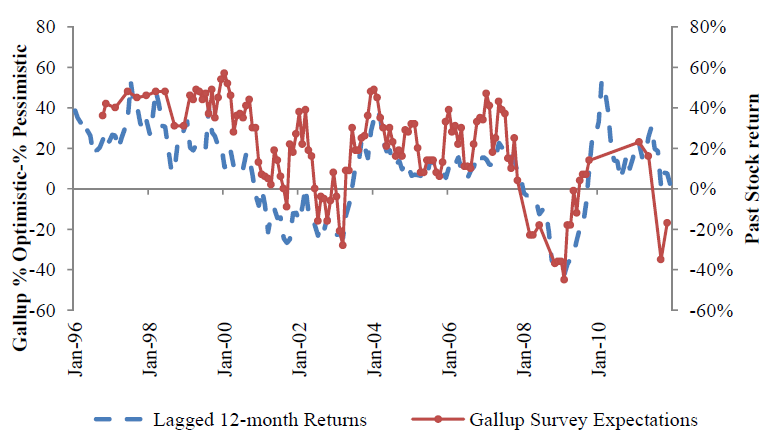 So the authors conclude that Extrapolative Expectations beat Rational Expectations. That result would imply that trend-chasing by quasi-rational investors is the big force behind long-term stock return predictability. If this result is true, it's a big step toward resolving finance's biggest mystery.

But I actually have a problem with the theory in this paper. The authors conclude that firms' equity issuance must respond to investors' trend-chasing, because someone needs to take the other side of the trade. But while this may happen, it leaves the turning points unexplained. At some point, prices stop going up and start going down. Since these turning points are brief compared to the trends at the observed frequency, they won't kill the regression results, but the authors' theory can't explain why they happen. Why don't trend-chasing investors push prices to infinity as soon as they see a sufficiently long up-trend?

It seems to me that there must be a role for hetergeneous investor expectations. Investors can't all be the same, and "fundamentalists" can't all be firms. There must be some subset of investors that, at some point, decides that prices are just too egregiously out of line with fundamentals, and acts together to kill the trend.

Interestingly, this is exactly the refinement that Greenwood and Shleifer make in this 2013 paper, in which they team up with Nicholas Barberis and Lawrence Jin. They make a theoretical model where some investors are extrapolative trend-chasers and some are rational. When the trend-chasers push things too out of wack, the rational fundamentalists step in to correct things. But the result is still a stock market that swings too much. So I suggest reading that paper as well. (Note: Papers in which trend-chasers interact with fundamental traders are not new; for example, see this paper by Hong & Stein or this more recent one by Mark Thoma. The Barberis (2013) paper is new in that it derives CAPM-type equilibrium asset pricing implications.)

So here's the really important question: If people really are trend-chasers, can rational investors make money by exploiting this fact? As John Cochrane shows here, simply taking advantage of long-run stock predictability may not make you a lot of money. You can only strike it rich if you can time those turning points. And simply measuring the aggregate expectations of investors will not be enough to time those turning points (especially because, as the authors show, by the time expectations show up in the surveys, the money is already moving).

Can it be done? Could models be constructed to predict the peaks of bubbles? If so, we would expect those models to gain in popularity until bubbles themselves are suppressed, thus eliminating the models as money-making tools and saving the economy from irrational asset price swings in the process. But I'll believe it when I see it...
Author: Noah Smith Posted at 6:55 PM