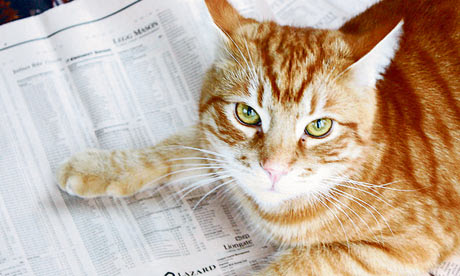 OK, I promised a review of Michael Lewis' Flash Boys, and here it is.

Flash Boys is an excellent book. It's fun and readable. It gives readers a window into how the stock market really works, and the kind of people who work there. It explains a lot about a very important issue that finance is facing.

For example, Lewis explains how a lot of the things that high-frequency traders are doing are just ways to game an SEC regulation, "Reg NMS", that came into effect in 2007. If this regulation were changed, a lot of the things HFT is doing would no longer make money. (Since gaming regulations is probably not a very socially valuable activity, a lot of financial economists have been calling for this regulation to be changed to create "batch auctions" every second or so; sadly, Lewis does not discuss this proposed solution.)

Also, Lewis gives a great explanation of how large banks use "dark pools", which were created to be a sort of refuge from HFTs, to rip off clients by selling them out to HFTs. Because the clients don't know the rules of the pools, and because they trust the big banks (yes, even after 2008), the clients lose money. In fact, I wish Lewis had shone more light on the dark pool issue in the first half of the book.

Finally, Lewis does a great job of exposing the injustice committed by Goldman Sachs against programmer Sergey Aleynikov. This actually had little to do with HFT, but was a classic tale of the evil that is callously committed by large bureaucracies where everyone is looking out for their own interests instead of trying to do the right thing.

So you should definitely read Flash Boys. But when you do, keep in mind two things that I think Lewis leaves out.

The first thing Lewis leaves out actually strengthens his case against HFT. Lewis, who tells a tale of bad guys ripping off good guys, glosses over the massive waste represented by the bad guys' own effort! At some point, it's clear that more speed is unnecessary for the efficient functioning of financial markets. There's no reason why prices need to adjust in a millisecond instead of a second. All the effort that HFTs spend on making this happen - all the math geniuses, and the supercomputers, and the hundreds of miles of fiber-optic cable - are valuable resources that could probably be put to much more productive use elsewhere in the economy. This has been pointed out by bloggers like David Glasner and Paul Krugman, and is based on a famous paper by Jack Hirshleifer, which you should read. A tale of social waste is not as exciting as a tale of plucky good guys rebelling against nefarious evil geniuses, but from an economist's perspective it's a big problem. The Death Star, if you think about it, was a massive waste of engineering talent.

The second thing Lewis leaves out is the other side of the story. All throughout Flash Boys, the victims of the HFTs - "investors" - are portrayed as good guys, just doing their jobs. The investors just want to trade, we're told, and the HFTs are unwanted middlemen who stand between the investors and stop them from trading. But who are these "investors"? Why are they doing all this "trading" in the first place?

Lewis' answer is that the investors are investing money on behalf of you and me - pension fund managers, for example, or mutual fund managers. But why should that require a lot of trading? Your pension manager is not Warren Buffett - he is not going to beat the market year after year. What he should do is to put your retirement money into a nice diversified basket of assets - ETFs, index funds, and the like - and just let it sit there for decades, maybe rebalancing it once a year or so. If he does that, the tiny amount that he gets front-run by HFTs at the beginning and end of those decades is going to make precisely zilch of a difference to your retirement account. But if instead, he trades and trades and trades enough to get substantially ripped off by HFTs, chances were that he was just playing the old sucker-and-be-suckered game that Michael Lewis wrote about in Liar's Poker.

In which case, he should be fired and replaced by a cat.

I'm actually not kidding. In 2012, the UK Observer held a stock-picking contest between professional investment managers - the good guys of Flash Boys - and a house cat named Orlando. The cat won. This result is, of course, supported by a long line of academic research into the unimpressive returns of professional money managers. As much as a quarter of your retirement account is being sucked away by the massive fees of money managers who, on average, are worse randomness. And this has been true since long before HFT existed.

In other words, HFT acts as a tax on trading, but much of that trading is hurting your mom and dad's retirement accounts in the first place - the "investors" who are the unambiguous good guys in Flash Boys are not so unambiguous in real life. In fact, if HFTs prompt pension funds to shift to passive management (or to "patient capital" investing that improves corporate governance), that could A) improve the efficiency of the financial sector, and B) boost returns for you and your mom and dad. In fact, there are signs that this is already happening! Led by California's massive CALPERS, big pension funds are shifting more and more money into ETFs, index funds, and the like.

Might we have HFT to thank for this sensible, rational shift? That's hard to say, but I think Michael Lewis should have at least mentioned the possibility in Flash Boys. Instead, I think he gives the "investors" and their "trading" a free pass.

So anyway, keep these omissions in mind when you read the book. But do read it. It's one of the most important popular books on modern finance, and - along with Scott Patterson's The Quants - is one of the first to introduce people to the brave, weird new world of electronic trading.
Author: Noah Smith Posted at 2:01 PM