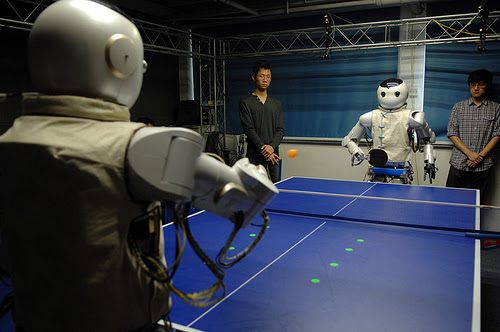 In his new book, Thomas Piketty argues that R, the rate of return on capital (which is different than the safe interest rate "r") is greater than g, the rate of economic growth, and that this fact can be expected to continue into the indefinite future, resulting in an ever-rising capital share of income and an ever-falling labor share. The big question is whether R really will be greater than g into the foreseeable future.

It occurs to me that this is just the "robots vs. globalization" argument all over again.

The "robots" argument basically says: "Labor" is just the flow income from renting out one specific type of capital, i.e. human capital. If technology continues to make more and more obsolete, then the value of human capital will fall as a percentage of total capital, and thus labor's share of income will continue to fall toward zero. That's the scenario I considered in this Atlantic article a while back. This thesis is supported by the research of Loukas Karabarbounis and Brent Neiman, and is often labeled the "rise of the robots" in econ blog discussions.

The "globalization" argument basically says: In 1973, when the world finally began re-globalizing after the period of restricted trade brought about by the world wars, there was a lot of labor with very little capital, in China and India and Southeast Asia and Latin America and Africa and the communist bloc. Capital was scarce, and was highly concentrated in rich countries. After trade barriers started falling, all that labor was dumped on global markets, resulting in a global labor glut and capital shortage, raising the return to capital and decreasing the return to labor. That imbalance will eventually right itself, but only after enough time has passed. This thesis is supported by the research of Michael Elsby et al.

These explanations aren't mutually exclusive, of course. But in terms of policy, if the "rise of the robots" is the biggest factor, we need to think about all kinds of difficult policy decisions and welfare arguments. But if globalization is the main reason for R>g over the last 4 decades, then all we can do - and all we should do - is wait for the big wave to end.

Which is why strikes me as a little weird that conservative-leaning economists seem to want to embrace the "robots" argument, while liberal-leaning economists seem to want to embrace the "globalization" argument. If globalization is at fault, then even trade barriers will avail us little, since we trade in a global marketplace; all we can do is wait until the poor countries fill up with capital, and labor's share bounces back. That is an outcome that conservatives would favor. But if robots are to blame, then Piketty is right, and labor's share will never bounce back...leaving some kind of radical redistribution as the only option for preventing mass human misery. That is not an outcome that conservatives would favor.
Author: Noah Smith Posted at 12:44 AM