"I guess that you can ask em"
- Dan Bern

The slow march away from Rational Expectations continues. Recently more and more people are challenging this most powerful of all ideas in modern macro. You have Woodford's 2013 survey of alternative approaches. More recently you have Woodford's bounded-rational New Keynesian model, which he used to answer the challenge of the Neo-Fisherians. In finance you have Greenwood and Shleifer measuring expectations with surveys and you have people making models with various kinds of irrational expectations, e.g. extrapolative expectations. It's not yet a flood, but it's an increasingly large trickle.

The question is why asset price crashes affect the real economy. One possibility is that they precipitate a regime shift in household savings behavior, causing households to abruptly start focusing on "balance sheet repair", also known as "deleveraging". There is some evidence that this kind of thing does in fact happen; the question is why. One possibility is that asset price crashes shift people's economic expectations.

If people have extrapolative expectations, then rising asset prices can be a signal of rising fundamentals, which people may mistake for a long-lived, structural trend. If asset prices then crash, people may then make the similar mistake in the opposite direction, forecasting a long-term continuing slump. Note that this explanation is my interpretation, not that of Bricker, Kimmel and Sahm, though they seem to be after something similar.

Anyway, BKS look at survey data on economic expectations, from the Survey of Consumer Finances. Those surveys are pretty accurate on a lot of measures - expectations generally end up matching aggregates, such as income growth. So BKS assume that they're accurate for measuring expectations as well.

What BKS find is that people who had more positive expectations increased their spending more - in other words, the expectations people reported in surveys correlated with the actions they actually took. Here is a graph from their presentation: 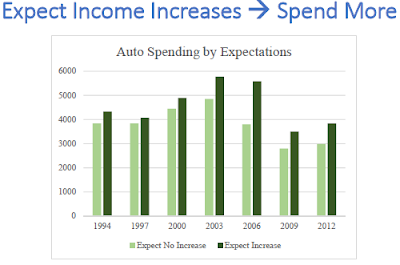 Interestingly, the expectations-based spending gap was bigger in 2003 than usual, and biggest in 2006, offering hope that this kind of data can be of use as a bubble detection method in the future. Consistent with this, they also find that survey-based income growth expectations predicted the ZIP codes in which housing prices would rise (and then crash) the most:

BKS find that households with more positive expectations spent more in response to rising house prices before the crash...but not after. That's an interesting discrepancy that might cast doubt on the idea that irrationally pessimistic expectations are the cause of deleveraging.

Anyway, this is one more interesting piece of research investigating the possibility of irrational expectations having major macroeconomic effects. It's not a slam-dunk case that extrapolative expectations cause bubbles, and I'd like to see a lot more investigation of extrapolative expectations as a cause of deleveraging. But it certainly seems to confirm that survey expectations measures are measuring something real and important and predictive. If I were a hedge fund, I'd want to get my hands on some SCF-type expectations data. And in the future, this offers some promise that irrational-expectations models may augment our understanding of financial business cycles.
Author: Noah Smith Posted at 8:32 PM