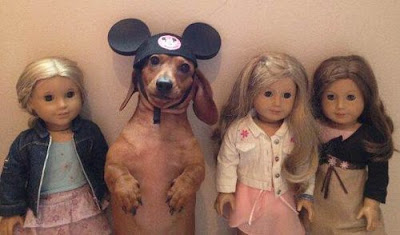 The Council of Economic Advisors recently put out a report on the long, steady decline in long-term interest rates over the last two decades. John Cochrane called the report "excellent", and reposts the following graph: 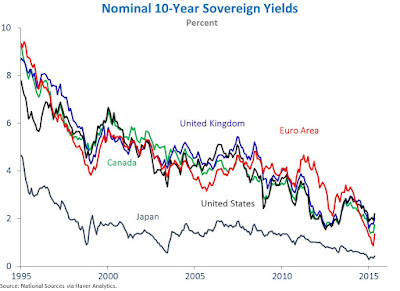 Williamson is responding to a quote by Bernanke stating that if (real) interest rates get low enough, investment will eventually be stimulated. Williamson points out the distinction between government borrowing rates and rates of return on capital in order to argue (I think) that pushing down government bond rates will not necessarily induce companies to invest.

In defense of this thesis, Williamson cites a St. Louis Fed report by Paul Gomme, B. Ravikumar, and Peter Rupert, which in turn draws on this 2011 paper by the same authors (though the data series have been updated). Gomme et al. measure what they call the "real return on capital" by dividing an income measure by a measure of book value. Here, via Williamson, is the chart of what they find: 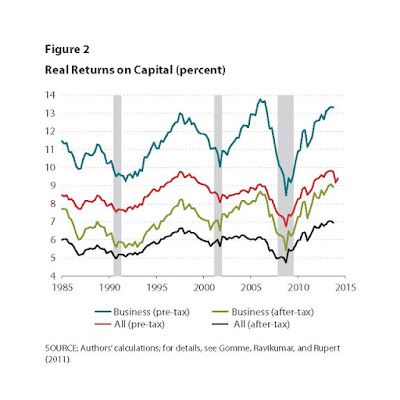 I am not sure whether Gomme et al. are measuring the return on capital correctly here. But I am pretty sure that Williamson is making sort of an error here - or at least overlooking an important distinction. What should matter for business investment is not businesses' return on capital, but the difference between their return on capital and their cost of capital.

That's just basic corporate finance. If your internal rate of return (basically, your return on capital) is higher than your cost of capital, you buy the capital (i.e. you invest), and you undertake the project. 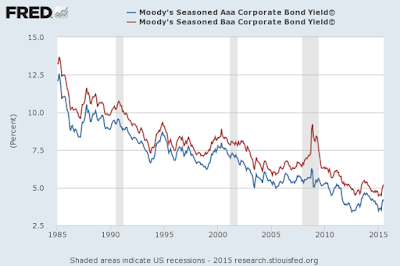 Here we see the same story that we saw in the CEA graph. Nominal borrowing costs for businesses have been falling more-or-less steadily since the mid-80s.

How about real rates? Here are real rates (annual, not monthly like the previous series): 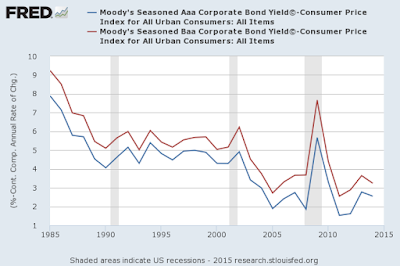 So real corporate borrowing costs have been falling more-or-less steadily for decades, just like government borrowing costs. Gomme et al.'s work on rates of return on capital does not measure a risk premium, and it does not bear on this basic story.

That does, of course, lead to a little bit of a puzzle: If Gomme et al. measure rates of return on capital correctly, then why haven't falling real costs of capital combined with rising rates of return on capital lead to a business investment boom? Even if the opportunity cost of equity capital (the equity risk premium) went up, wouldn't that just cause an investment boom, accompanies by a shift from equity financing to debt financing? For this reason, I suspect that either 1) Gomme et al. have measured the return on capital incorrectly, or 2) basic corporate finance theory doesn't capture what's going on in our economy, or 3) both. (Note: As Robert Waldmann and many others have pointed out, Gomme et al.'s series is an average rate of return, where what should matter for investment is the marginal rate. So given that, it's not even clear what kind of conclusions we could draw from Gomme et al.'s time series.)