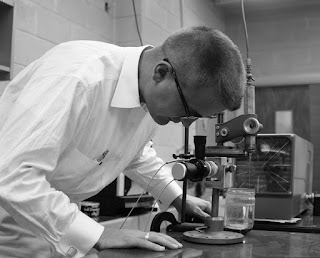 Ever since Paul Romer went on the attack against what he sees as the politicization of growth theory, there has been a lively Twitter discussion about whether and how politics and science should be combined. Should we try to keep politics out of science? And what does that even mean? Sociology grad student Dan Hirschman challenged me to lay out my thoughts in a blog post, so here it is.

One thing I absolutely don't mean by "separate politics and science" is that scientists should refrain from political activism. I think scientists should definitely be free to engage in any political activism they like. I just think that they should try their best to avoid incorporating their activism into their science. To make an analogy, I think particle physicists should refrain from having sex inside a particle collider (cue SMBC comic!), but that doesn't mean I want particle physicists to be celibate.

Another thing I don't mean by "separate politics and science" is to claim that it is possible to do this 100%. It is inevitable that scientists' political views will sometimes seep into their assessment of the facts. But just because it's inevitable doesn't mean it's desirable. To make an analogy, every desk has some water particles on it, but that doesn't mean you shouldn't dry off your desk if you spill some water on it.

So that's what I don't mean. On to what I do mean.

I'm assuming that there's a fundamental difference between factual assessments and desires. They affect each other, sure - no one is totally objective, and people's desires are also shaped by what they think is possible. But they aren't the same thing.

I'm saying that when doing science, people ought to try to ignore their desires and just assess facts. Basically, they should try to be as objective as they possibly can.

To be more precise, I think there ought to be an activity called "science" that consists only of people trying as hard as they can to ignore all desires and just assess facts.

Now you might ask: "Noah, why do you think there ought to be such an activity?"

Well, I could just reply that it's purely my moral intuition, and as a Humean, I don't need any other justification. In fact, any justification I give will open itself up to questions of "But why?", until I finally just say "Because that's just how I feel", or "Oh come ON!". But just for fun, let me try to explain some of the "good" consequences I think will generally result from people following my science-and-politics norm.

Basically, I think societies where scientists obey this norm will generally be more effective - whatever their goals - then societies that don't. For example, suppose there are two societies, Raccoonia and Wombatistan, and both are suffering from lots of bacterial diseases. Both countries generally subscribe to a religion that says that invisible gnomes cause disease. But Raccoonia is committed to the norm of science that I described above, while in Wombatistan people think that politics and science should be mixed. In Raccoonia, scientists put aside their religion and discover that antibiotics fight bacterial disease, while in Wombatistan, scientists publish papers calling the Racconian papers into doubt, and arguing for gnome-based theories. Raccoonia will discover the truth more quickly and manage to save a lot of its people.

WAIT!, you say. Isn't the goal of stopping disease itself a political goal? Well, sure. There's a clear division of labor here: The politicians tell the scientists a goal ("Find the cause of disease!"), and the scientists pursue the goal (actually, the scientists could even assign themselves the goal for political reasons, then try to disregard politics while pursuing it, and they'd still be following my norm). When the scientists go into a "science mode" in which they disregard all political considerations, they are more effective in reaching the goal.

This norm I'm suggesting won't solve all of society's problems, obviously, because that depends on what you think is a problem. If you have bad politics - for example, if you think disease is a just punishment for sins and shouldn't be cured - then all the scientific discoveries in the world won't help you much (I think the Soviets kind of demonstrated this). But whatever your goals, following my norm of science will make you more effective in accomplishing them.

Now, I don't think this norm is universal and overriding. I'm a Humean, not a deontologist - I have no need to establish a priori moral axioms that encompass all situations. I can think of extreme situations where I'd violate this norm. If the Nazis tell you to build a nuke, go ahead and sabotage that project!