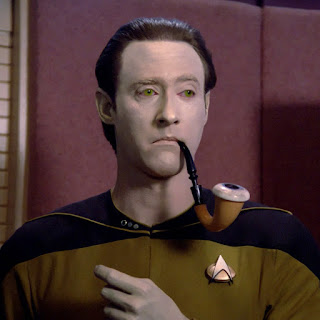 My Bloomberg View colleague Justin Fox has written an excellent post publicizing the econ profession's shift from theory to empirics. Fox puts the Hamermesh data on publication percentages into a lovely Bloombergy chart: 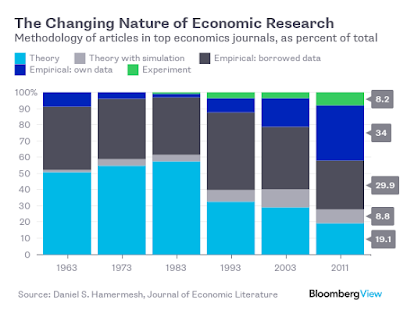 By now this is an old story to people within the profession. But I think it's an important story to keep telling to the public, in order to increase people's trust of economists.

People instinctively know that empirical sciences - fields where theories have to be tested by data in order to gain currency - are more reliable than ones based on pure theory. Seeing that economists are now checking their ideas carefully will make the public more confident that prevailing ideas were not simply accepted because of ideology or intellectual whimsy. This is also why I think colleges should start teaching empirics in Econ 101.

Of course, there's bound to be resistance to the popular narrative of the Data Revolution. In an earlier post I tossed out some possible reasons for resistance within the econ profession. Some of those are good reasons, and some are less good, but the people in the public discussion will probably have a much simpler objective function. Ideological free-market types believe that simple Econ 101 type theory supports their ideas. Empirical results, because they deal with an inevitably non-101 reality, threaten that nice clean little intellectual world that the ideological free-marketers have built.

So I predict that we'll see most of the public disapproval and skepticism of the Data Revolution - on Twitter, in the media, etc. - coming from folks with a strong free-market ideological bent. Though a bit will come from lefty types annoyed that it was data rather than Marxist hand-waving that ended up transforming economics.

What form will the public criticism take? At first, I expect to see a lot of people saying stuff like "without theory, data is useless," or "data doesn't speak for itself." This, of course, is trivially true. But the Data Revolution isn't actually about replacing theory with data, it's about checking theory with data. Empiricists aren't out there running batch-file regressions - they're doing local tests of theories. (In fact, they're probably doing too much structural modeling, even when it's only related to their study by the most tenuous of threads!)

The battle of ideas is really between A) those who think that theories should have to have empirical support before we believe them, and B) those who want to believe theories until proven otherwise. It's about the strength of priors, in some sense - science vs. theoryderp. The Data Revolution really is just as important as Justin Fox writes. It represents a true paradigm shift in econ.

Eventually, the simplistic rhetorical criticism will run out of steam, and people will start gunning for some famous empirical results. The idea will be to discredit one or two top studies, and imply that empirical econ in general is unreliable, like nutrition science or social psychology. Naturally, there will be some targets available for this sort of attack, since A) scientists make mistakes, and B) conditions in the economy change, so old results sometimes no longer hold.

The most sophisticated attack, I predict, will be based on replication and publication bias. That criticism will be the most effective, since it's almost certainly true. Econ has terrible data management practices, and is just as subject to publication bias, p-hacking, and data mining as any field.

But I think that in the end, empirical econ will benefit from these public attacks. Data management practices will improve, and meta-analyses will sort the reliable results from the ephemeral. Randomization and control procedures will get better, and statistical analysis will become more sophisticated. Credibility will increase and increase.

In the end, I predict that the Data Revolution will not be a fad or a flash in the pan. Humans like believing in wanky theory when data isn't available, but when data is available, they want to have some confirmation that theories actually work. Most people are scientists at heart. And now that econ has tools that are more like the tools of science, I predict that the changes in the field are irrevocable.

Here is a list of my previous prolix posts pompously pontificating on this particular point...

"The death of theory?"

"A bit of pushback against the empirical tide"

"Theory vs. data in economics"