Books to help you understand Japan 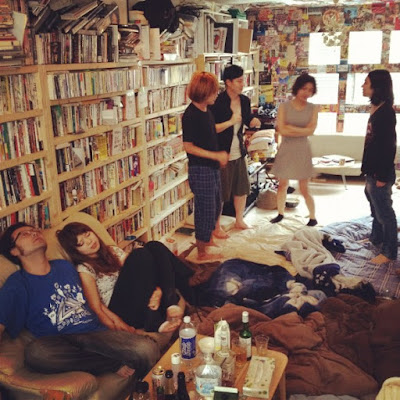 Unfortunately Noah hasn't had his requisite 3 daily cups of oversteeped black tea, so he grouchily responds: "How about instead of reading a book, you learn the language fluently, live there for a few years, talk to a bunch of people, and learn for yourself?" But then Noah gets his caffeine fix, and the norepinephrine flows freely through his brain, and he says "Oh, BOOKS? Sure, I got books." And walking over to his lovely fake mahogany Wayfair bookshelf, he proceeds to make you the following list:

This book, which you can read in an hour or less, basically summarizes a bunch of social psych studies to prove that Japanese culture changed dramatically in the 1980s. Most of the old stereotypes - conformity, group orientation, etc. - used to be pretty true, but now are totally false. Japan used to rate as more conformist, group-oriented, etc. on most measures than the U.S., but now rates as individualistic and independent as the U.S., or more. Feel the power of data destroying your preconceived notions!

Also from the 90s, but also still relevant. Nightwork is about two things: corporate culture and sex culture. Japan's corporate culture is, without a doubt, the biggest difference between the West and Japan - although Don Draper might find it a little less alien. Sex culture is different too, mostly because most kinds of prostitution are both legal and well-accepted in Japan. This book is about the convergence of the two - about how Japanese companies solidify their corporate cultures by paying for employees to go to pseudo-prostitutes (actually, more like in-house escorts) called "hostesses." Anne Allison, who is one of the best English-language anthropologists who studies Japan, actually lived and worked as a hostess for years to do research for this book. It's really pretty amazing.

This is just a bunch of vignettes of modern Japanese people's lives. Kind of dry, but pretty wide-ranging.

This is a picture book of Japanese street fashion from the 1990s. It's mostly just photos, but it also has mini-interviews of colorful kids at the bottom of each page. These are actually excerpted from a magazine of the same name that was popular back then.

This is basically a history book about Japan's industrial policy - what it was, where it seems to have worked, where it went wrong (spoiler: almost everywhere, after the 1970s). It also contains Michael Porter's theories about competition, but you really don't need to believe those in order to appreciate the history here.


2. The Japanese Economy, by David Flath

This is an overview for people who have studied econ. The author, David Flath, is a friend of mine (we met on the streets of Tokyo, where he recognized me from my blog photo), and also happens to be the PhD advisor of Karl Smith, the former econ blogger and prof.

This is a bunch of articles written write before the big 2011 earthquake, mostly about Japanese business, but also a little about the economy and culture. The authors are a collection of business leaders, writers, consultants, etc.

See also: We Were Burning, by Bob Johnstone, The Power to Compete, by Hiroshi and Ryoichi Mikitani, Saying Yes to Japan, by Tim Clark and Carl Kay

1. Democracy Without Competition in Japan, by Ethan Scheiner

This book explains a lot about Japanese politics - most importantly, why one party has ruled Japan for most of the postwar period, despite strong democratic norms and a free and fair election system. The reason, according to Scheiner, is that the Japanese fiscal system and electoral system combine to make it easy to basically just buy votes. But you don't have to accept this thesis in order to appreciate the political history here.

Modern Japan's institutions were partially shaped by a big war that almost no one now remembers. This book consists of a bunch of first-hand accounts of Japanese people from that war period. Just remember that these old people's way of thinking is just as alien to that of modern young Japanese people as your grandparents are to you.

The war memoir of Japan's (probably) best naval captain, this book gives great insight into Japanese military culture. It also shows how traditional samurai culture (the author is from a samurai family) clashed with the modern militaristic culture of WW2-era Japan. Finally, it displays some interesting Japanese cultural quirks - women hitting on men! - that seem to have survived through the ages.

So there you go. Happy reading. If you know of any other books along these lines, send them my way. And remember, even the best books will only scratch the surface of any culture...
Author: Noah Smith Posted at 8:30 PM