Historical cycle theories are silly...or are they? 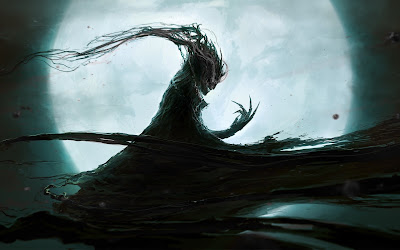 I have a soft spot for theories I thought of when I was 14. Back then I consumed a lot of epic fantasy books (and video games, and TV shows), in which an ancient evil is often just now returning after being banished (typically for a period of 1000, 5000, or 10000 years), and new heroes must arise to defeat it again, etc. etc. I reflected that my grandfathers had defeated cosmic evil, back in WW2, and that before that, my American forebears had defeated cosmic evil in the Civil War, so at some point we were due for another showdown with the ever-returning Forces of Darkness. I also figured that each generation after the war would be a little softer and more complacent than the last, and that this weakness would be one thing that encouraged the Forces of Darkness to make their comeback. And since it was about 75 years from the Civil War to WW2, I figured that each cycle lasted about four generations, and that it would be the generation after mine who would have to bear the brunt of the fight the next time.

I recently found out that the authors Neil Howe and William Strauss already published a very detailed version of a very similar theory, back in 1991 (well before I turned 14!). I found this out via Steve Bannon, who according to news reports is a fan of their theory. Recently, Howe wrote a Washington Post op-ed explaining the theory. The basic idea is that there's a four-generation cycle. A "crisis" generation creates social unity and builds up national institutions, and each successive generation challenges and degrades those institutions, until four generations later the institutions collapse and there's another crisis. According to Howe, the Millennials are the ones who will have to renew our society this time.

That's a cool theory. But like all periodic theories of history, it's easily falsified.

Why? Because lots of crises are externally imposed. The Black Death's arrival in Europe had little to do with the strength of European institutions. The Japanese invasion of the Philippines was unrelated to the Phillipines' position in any generational cycle. The Industrial Revolution and the Mongol Invasions blindsided every nation on the planet. And so forth. Exogenous shocks obviously happen, and they disrupt the timing of any generational cycle. So the nice smooth even periodicity that Howe and Strauss posit can't exist, even if there are forces tending in that direction.

Also, if you look at history, you see both some very long periods of crisis-free stability and some very long periods of continuous dramatic social upheaval. For example, China's "century of humiliation" involved about 110 years of almost continuous rebellion, civil war, invasion, mass killing, and political upheaval. France during the years from 1789 to 1945 experienced two empires, three republics, a large number of revolutions and counter-revolutions, many foreign invasions, and millions of violent deaths.

On the flip side of the coin, Britain from the Glorious Revolution of 1689 to the start of World War 1 experienced over two centuries of stability with no real regime change or total war (the Napoleonic Wars being the closest thing, but ultimately not even requiring mass conscription). China during the Ming Dynasty and Japan during the Tokugawa Dynasty were similarly stable.

If you hunted around and looked closely, you might be able to look at those long stable centuries and find some minor social disruptions loosely corresponding to the Strauss-Howe four-generation cycle. But think how many other such minor disruptions you'd be ignoring! (Were the 1960s a "crisis" for America? We had a bunch of assassinations, race riots, and a major war, after all.) Apophenia is a powerful temptation. But don't be fooled - by any objective measure you can find, history is aperiodic.

So formally, in the rigorous sense, Strauss-Howe theory is wrong. BUT, I still think it could be describing some important processes at work. Just because history is aperiodic doesn't mean it's random.

First, there's the idea of institutional decay, as put forth in Mancur Olson's The Rise and Decline of Nations. The idea here is that institutions developed to solve the problems of one era eventually become powerful incumbents who resist needed institutional changes later on down the road. If crises cause a "reset" of this cycle - the necessary fall of ineffective incumbent institutions, and their replacement with newer, more effective ones - the result could look a lot like a Strauss-Howe cycle. If the time it takes for institutions to go from effective to parasitical is a few decades, then it could even look periodic for countries that experience few external shocks (like the U.S., perhaps?).

Second, there's the idea of a cycle of globalization. If free capital and labor flows tend to cause instability to build up in global economies - through excessive leverage, economic financialization, difficulty absorbing large cohorts of immigrants, the creation of an unsustainable "reserve currency" regime, etc. - then there could be repeated periods of globalization and retrenchment. Obviously, since there has only really been a modern global economy for a century and a half or so, this sort of cycle can't be reliably observed or confirmed yet. And no one has suggested that the cycle lasts a fixed number of generations or decades. But there are plenty of parallels between 1890-1929 and 1980-2008. And there are also parallels between the Great Depression and the Great Recession. And you could be forgiven for believing there are parallels between the politics of the 1930s and the politics of today.

So I wouldn't totally toss out the idea of a predictable social crisis. Whether it comes from generational attitude changes, institutional decay, or the instability of globalization, it's certainly possible that eras of stability tend to lead to crises eventually.
Author: Noah Smith Posted at 8:01 PM