Why human capital is capital 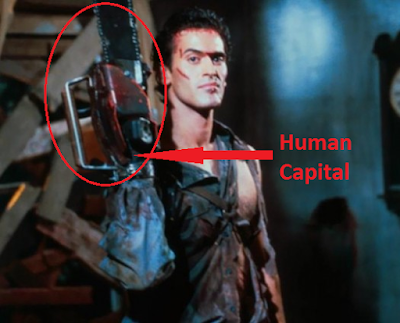 Economists tend to use the word "capital" pretty loosely. It just means "anything you can spend resources to build, which lasts a long time, and which also can be used to produce value." That's really broad. For example, it could include society itself. It also typically includes "human capital," which refers to people's skills, talents, and knowledge.

Why do most economists define "capital" this way? Really, it's just a convenient way to make the kind of models they like to make. I tried to explain this in a wonky post a couple of years ago.

But there are people out there who really don't like this broad definition of "capital". For example, the economist Branko Milanovic has repeatedly argued against use of the term. So has Matt Bruenig. And Paul Krugman agrees with them. They would rather restrict the word to mean what economists typically call "physical capital" - machines, buildings, and the like.

Who's right? In general, I don't like to boss anyone around with regards to vocab choices. Use words the way you want to use them, and just let people know what you mean. I would personally have preferred a different term, like "skill capital". But I think the term "human capital" is useful because it helps to convey some important truths about the world. Here are some facts about the world that I think the term "human capital" helps remind us of:


1. It's worse to be uneducated, unskilled and poor than to be educated, skilled and "poor".

Imagine that you're 22, educated, and poor. You have a bunch of student loan debt, but no money in the bank. You have book learning and credentials, but no immediately employable skills, very little on your resume, and not much of a network. You're sleeping in your friend's spare room and buying the cheapest food you can find.

Congratulations, you're me! Was I poor? By many measures, yes. But I certainly didn't feel poor. I knew that my Stanford degree and general intellectual skill (I could do math well and write well) would eventually let me get a good-paying job. In fact, I had no qualms whatsoever about my economic future. Zero fear.

But imagine yourself in the same situation with no degree, and without that general writing and math skill. Imagine yourself as a 22-year-old with the same debt and the same empty bank account. What are your future employment prospects? Construction worker? Landscaper? Day laborer?

The second way is a much worse way to be, right? Both 22-year-olds, me and my hypothetical uneducated counterpart, have the same official amounts of wealth. But despite the fact that I was scrounging for cheap food and sleeping in a friend's spare room, I didn't really feel like a poor person, and with good reason - I knew my future wasn't a future of poverty.

The word "human capital" gets at this distinction. It's a way of saying "education and skills are a form of wealth." If you ignore this wealth, you end up treating penniless grad students the same as honest-to-goodness poor people.


2. Some people make more money than others from the same amount of labor.

But, as I'm slightly ashamed to admit, I make more money.

I view that difference as a form of passive income. Without spending any more effort than my grocery store worker counterpart, I get more money. This is just as passive as owning stocks, bonds, or real estate. My education and my skills (and my human networks, and my knowledge of the labor market) are a form of wealth that delivers me income for no extra effort.

It makes sense to me to have a word for this other sort of passive income-earning power. And "human capital" refers to exactly that.


3. Government spending on education represents investment for the future.

Government pays lots of money to educate the populace. We have universal public school. We have state-supported universities and colleges. Families themselves pay a lot on top of that, for university tuition, room and board, tutors, etc.

Is that spending a form of consumption? Is it just fancy day-care and subsidized partying? Some cynics would say yes, but I think the answer is very clearly no. A lot of that spending represents an investment in the future. The spending today will pay off tomorrow, in the form of a more productive populace.

When you spend money today and get back more than you spent, I say you're building wealth. And "capital" is really the same thing as "wealth" - it's the ownership of something that can deliver you income (passively!) in the future. Education creates no physical stores of value - no trucks or buildings or machine tools. But skills and knowledge are durable - you remember how to program a computer, or how to think like a lawyer.

When investment creates durable stores of value that produce income in the future, it makes sense to me to call it "capital". In my opinion, one big problem in the United States is that government doesn't invest enough. I think that depicting education spending as an investment in productive capital is helpful for making the case that government should spend more on education.


So there are three reasons why it often makes sense to think of skills and education as a form of capital. What about the objections? One objection people give is that income from human capital isn't passive - but, as I explained in point 2, it really is passive, since it allows you to get more income without any more effort - or the same amount of income for less effort.

A second objection is that people's education and skills can't be bought and sold, because we don't have indentured servitude. That's basically true (though there are some gray areas, like long-term contracts, noncompete agreements, or wage garnishment for student loans). But that's just a law. We could easily pass a law saying that office buildings can never ever be bought or sold, but must be owned forever by the people or companies that built them in the first place. Under this law, they could only be rented out, and only using month-to-month leases.

Would that law make office buildings any less a form of "capital"? I say no. By the same token, laws against indentured servitude change how human capital gets used in the economy, but they don't really change what it is. I strongly support laws against indentured servitude. But they don't change anything about the physical nature of education and skills. They don't change the fact that these are durable investments that produce passive income.

So by using the term "human capital", we remind people of several important truths:

3. We remind people that government spending on education is an investment for the future.

I think those are good and important things to keep in mind.
Author: Noah Smith Posted at 5:13 PM