Why liberals should own guns 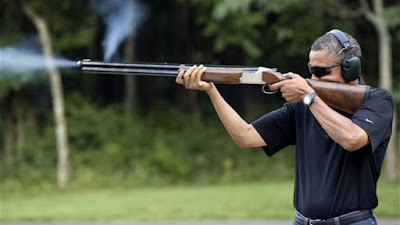 I wrote a Twitter thread about this a while back, but it got deleted in a periodic wipe, so I thought I'd reprise it here for posterity, and expand a little on the earlier point.

Why? One reason is that liberals are more likely to live in big cities, where there is an assumption that violence will be stopped by the police (and by numerous witnesses), rather than by one's own defensive actions. But I think part of it is cultural - liberals, by and large, want to live in a society without widespread gun ownership, and many have decided to "be the change they want to see in the world."

But leading by example hasn't worked. Gun control has been mostly a political non-starter except for a very brief period at the beginning of the Clinton administration. Conservatives continue to use the issue of gun rights as a rallying cry and cultural wedge issue, constantly invoking the fear that liberal politicians will come storming into Americans' houses and take away their means of self-defense.

Now things may be changing. A recent BBC report found that since the election of Trump, liberal interest in gun ownership has spiked. The Liberal Gun Club, run by Lara Smith (no relation) has reported a 10% increase in membership and a "huge" increase in interest.

I think this is a good trend. More liberals need to own guns. Why? Here are two reasons:


1. It would make any calls for gun control more credible.

Right now, many conservatives see gun control as a plot to disarm them. But if liberals are also armed, calls for things like assault weapons bans, or background checks, or stricter licensing requirements sound more like an arms limitation treaty than a call for unilateral disarmament. In other words, instead of liberals saying "Hey, give up your guns," they'll be saying "Hey, let's all give up some of our guns." That's a more credible, more powerful message.

There's a precedent for this. Half a century ago, the Black Panthers, ardent gun nuts, staged an armed protest at the California state capitol. The state responded with the Mulford Act, which forbid open carry - a very big, rapid success for prudent gun control policy. Now, I'm not suggesting liberals stage armed takeovers of government buildings - the 60s were a very different time, and people like Cliven Bundy aren't going about things in the right way. But the larger point is that when liberals have guns, even conservative politicians are willing to embrace sensible gun control measures.

A more metaphorical example is the successful history of U.S.-Soviet and U.S.-Russian arms limitation treaties. The Russians love nukes like Ted Nugent loves guns, but because we had nukes of our own, we managed to make them see how sensible it would be to limit the total amount.


2. It's insurance against the breakdown of public order.

The total breakdown of public order is highly, highly unlikely. It would take a nuclear war, a civil war or coup, or a major natural disaster like a Yellowstone super-eruption to produce a situation in which America reverted to anarchy.

But just because it's unlikely doesn't mean it's pointless to insure against it. This is a tail risk, but the consequences would be huge and disastrous. So it might make a lot of people sleep better in their beds at night knowing that if it came time to grab our guns and get to safety, they'd have guns to grab.

And the erratic nature of Trump's leadership probably increases the tail risk just a little bit - an accidental tweet or a falling-out with Putin might set off a nuclear war.

Also, it's important to remember that small, localized breakdowns of public order do also happen in cities from time to time, and that it can help to have a gun in those extreme cases - especially if you're a minority, and less likely to get immediate help from the cops.

There's actually sort of a historical precedent for this as well. In the episode known as "Bleeding Kansas" in 1854-1861, the U.S. government decreed that slavery's legality in Kansas would be decided by popular vote. Naturally, this made pro- and anti-slavery people both rush to settle in the state, and it also sparked a guerilla war. The government, paralyzed by the fear of a larger civil war (which soon happened anyway), did little to quell the violence, so the state became a zone of anarchy. The anti-slavery forces, known as Jayhawkers, were well-armed, and eventually won the conflict.


So these are the two main reasons that liberals should own guns. The main argument against owning guns is the risk of accident - over a hundred American kids die from gun accidents every year. Why take the risk? Well, it's certainly possible to minimize the risk of gun accidents - keep the gun in a safe. If you take proper precautions, the risk is far lower than the aggregate statistics might suggest.

But if that risk is just too high, consider simply learning how to use guns. Knowing how to shoot, maintain guns, etc. is probably more important than physically having the guns in your home. Who knows...you might find out it's fun!

Anyway, remember, always safety first. And if you do have mental illness, I'd say don't buy a gun, even if the law allows you to.
Author: Noah Smith Posted at 10:01 PM