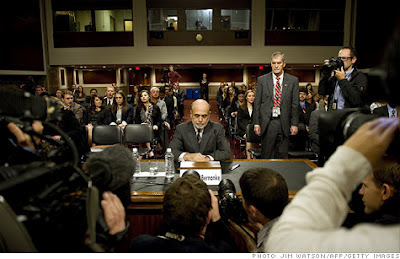 "Market monetarists" like Scott Sumner and David Beckworth frequently make the case that countercyclical fiscal policy is unimportant - that we shouldn't be thinking about optimal fiscal policy. They make (at least) two basic arguments:

Argument 1: Fiscal policy doesn't matter for aggregate demand because the Fed will just cancel it out.
Argument 2: The Fed is much more technocratic than Congress, and also quicker to act, so stabilization policy is best left to the Fed.
I've addressed Argument 1 before, so now I want to focus on Argument 2. This is not a new argument, but Scott Sumner states it pretty concisely in this reaction to the new DeLong/Summers fiscal policy paper:

The optimal regime relies on monetary policy to steer the nominal economy, and fiscal policy to fix other problems.  So we are going to defend the model how?  A blueprint for failed states?  For banana republics?  Fair enough, but ask yourself the following question:  In a failed state, which is more incompetent branch of government; the central bank or the legislature?

Yes, the Fed is bad.  But Congress is downright ugly.  Deep down most economists are technocrats.  They see the central bank as being the best and the brightest, the guys who are above politics, who will “do the right thing.”  And how do economists view our Congress?  The terms ’stupid’ and ‘incompetent’ don’t even come close to describing the disdain.  So are we supposed to change our textbooks in such a way that the fiscal multiplier is no longer zero under an inflation targeting regime (as the new Keynesians had taught us for several decades?)  And on what basis?  Because the Fed might be so incompetent that we need Congress to rescue the economy?  In what world does that policy regime actually work?  If you have a culture that has its act together, such as Sweden or Australia, the central bank will do the right thing.  If not, then all hope is lost.

Now, let's think about this for a second. As Scott Sumner says, in an optimal world the Fed is willing and able to costlessly stabilize aggregate demand. We probably do not live in that optimal world. Let's think about the kind of world in which we actually find ourselves. In the real world, there may be the following limits to Fed stabilization of aggregate demand:
Limit 1: Monetary policy may itself be of limited effectiveness (for example, because of model uncertainty and variable lags that mean that the Fed never really knows exactly what it's doing).
Limit 2: There may be political constraints on Fed policy. See Simon Johnson for a brief discussion of some of these.
Limit 3: There may be unavoidable costs to countercyclical monetary policy. The bigger the AD shock that must be canceled out, the larger the costs may be. Robert Lucas, who asserted that costless disinflations can't exist, certainly believed this.
First, let's ignore the first two problems, and just focus on the third. Suppose that whatever the Fed has to do to stabilize aggregate demand - print money and buy stuff, for example, or convince people that it is willing to do so - has some costs. In that case, the less the Fed has to do, the better for everyone. Now suppose that Congress has a procyclical fiscal policy - in booms Congress cuts taxes (as Reagan and Bush did), and in recessions Congress cuts spending ("austerity"). This will tend to amplify whatever AD shocks the world throws our way. It will raise the costs of Fed stabilization policy. In this case, Market Monetarists would naturally want to think about saying to economists like John Taylor, who in practice support this procyclical fiscal policy:
WOULD YOU PLEASE CUT THAT OUT, PLEASE??
So that gets Market Monetarists halfway to the Brad DeLong position. "Austerity" is bad, and boom-time tax cuts are bad, even if the Fed is the only one doing the stabilizing.
What about proactive fiscal stabilization policy? Here, we have to bring in Limits 1 and 2 from above. If there are technological or political constraints on Fed effectiveness, then it becomes an open question whether or not our best bet is to still stick with "Fed only," or whether to employ a mix of Fed and Congress. It is not immediately obvious that the answer is "Fed and Congress," since it depends on the way in which they interact. For example, if Fed and Congress act in sync, and are simply limited in the size of the actions they can take, then it's probably a good idea to have them complement each other by enacting fiscal and monetary stimulus at the same time. We probably tried to do something like this in 2009, when the ARRA and QE1 happened at roughly the same time. And this seems to be what DeLong and Summers would like. But if Congress is so slow that its actions are just as likely to cancel out the Fed as to help, then we had better stick with only the Fed, despite its limitations.
For a better and more technical discussion of some of these issues, and for a more technical argument against fiscal policy (by Mankiw & Weinzerl), see this post by Brad DeLong.
Anyway, my point is that it doesn't seem very fruitful for Market Monetarists to ignore fiscal policy issues and simply keep repeating "We should leave it all to the Fed." Fiscal policy is important even if you believe the Fed is best. Market Monetarists should be speaking out against "austerity" and boom-time tax cuts. And the argument that "Fed only" is the optimal stabilization policy is itself highly non-obvious and needs more empirical support, not just intuition or theoretical postulation.
Author: Noah Smith Posted at 1:49 AM