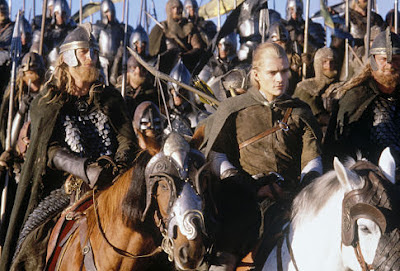 To tribe or not to tribe? That is the question.

I don't get much of a kick out of being an iconoclast. It does not make me feel smug or special or superior to "buck my own team" - to disagree or argue with people who agree with me most of the time. Neither do I feel any particular need to be a "maverick" or a "sensible centrist", or to burnish my moderate credentials with "Sister Souljah moments". I do not crave invitations to Beltway cocktail parties reserved for journalists who cry "a pox on both houses". I don't like cocktails, and I only know the Beltway is a highway because I just Googled it.

In fact, it's nice to have a team. When the sneering RBC loyalists or ravening libertarian hordes show up in my comment threads to tell me what a crappy economist and crappy person and moron I am, it is nice to see them get jumped by an army of left-leaning commenters. It's nice to think that my decidedly anti-status-quo ideas about much of economics (especially macro) are going to win instant sympathy among those who think that the currently dominant paradigm produces too much inequality and unfairness.

I'm a "liberal economics blogger". I guess. Meaning A) I'm a liberal, and B) I'm an economics blogger. But also meaning that I stick up for Paul Krugman, and that I spend a lot of my time on this blog criticizing the dominant paradigm in economics, which currently is a conservative paradigm.

And yet sometimes I come out and say things like "internal devaluation can work over the long term". Or that we would benefit by admitting more high-skilled immigrants (Isn't that a supply-side measure? Aren't supply-side measures something the conservative team is supposed to like?). Or say "carbon taxes won't work". Or pat libertarians on the back for talking about public goods. Or admit that I really have no idea if fiscal stimulus is worth the cost.

This inevitably makes my "team" kind of mad. I get comments saying "Noah, what you don't realize is that the Koch-funded neoliberal conspiracy is destroying our nation and if you don't spend every post calling out those corrupt plutocratic scumbags, you're part of the problem!!"

When I see comments like that, I do not smile to myself and think "Ho ho, look how moderate and sensible I am! If I'm getting criticized by both extremes, I must be doing something right!" I am not Joe Klein.

But yet I say those things anyway. Why? Because as nice as it is to have a team, I have a stronger and deeper allegiance, which is to science. And by "science" I basically mean rational skeptical empiricism. My dad raised me on these ideas; they're very important to me, and I believe they are the best. So if I think an idea makes sense, I'm going to say why. If I don't buy a theory, I'm going to say I don't buy it. I believe that only by being intellectually honest can we find the best answers and the best policies.

Now here you may cross your arms and say "Economics isn't a science! Hrmph!" But if so, you're missing the point, which is that it can be a science and (according to Noah Smith's value system) it should be a science, and when it's not a science that's bad.

In fact, I think that politicization is a big problem - maybe the big problem - with economics. People believe theories not because the evidence solidly supports those theories, but because the policy implications support the goals of their tribe. Some people like RBC models not because they look out the window and see technology shocks, but because RBC models say that small government is good. Some people disbelieve in externalities just because they think the First Welfare Theorem will reduce their tax bill. Some people believe in the signaling model of education because they think college turns young people into communists. And so on. The list of top economists who publicly subscribe to standard Republican narratives of reality is long, long, long.

I get the sense that this is true on the "left" as well. Some people seem to (mistakenly) think of Keynesian stimulus as a kind of welfare-based redistribution scheme - or just as something involving government that conservatives hate, and therefore good. Some people consider immigration to be a globalist neoliberal plot, simply because it'll adversely impact their own relative wages.

Whatever. I can't jump on that boat. It would be nice to have an army at my back, but I can never betray science. My ideas may be wrong, or I may misapprehend the evidence, and that's fine - I try never to be too certain that I'm right. But I just can't bring myself to misrepresent my honest intellectual thought on a science-related topic just to appease the folks who are supposed to be on my "team".

I mean, come on, people. Why do you think "conservative economics" went off the rails in the first place? Was it because it was conservative, and conservatism is bad and liberalism is good? Many people are probably nodding their heads. Well, maybe that's why. But my money is on another explanation. I think that when economists who were conservative became "conservative economists" - when they let  their normative ideas guide their positive ideas - they allowed themselves to stop going by the evidence. And that diluted the quality of their theories, which is why there is such ample low-hanging fruit for liberal criticism of economics in this day and age.

I'm not going to do that. I like having a gang, but science has got to come first. If that gets me some angry comments, so be it. As Feynman said: "If we take everything into account, not only what the ancients knew, but all of what we know today that they didn't know, then I think we must frankly admit that we do not know. But in admitting this, we have probably found the open channel."
Author: Noah Smith Posted at 12:29 AM